The Buffalo Sabres, with all of their cap space, looked at restricted free agent, Cody Hodgson, and said, 'let's pay this guy.'

Hodgson just came out of his entry-level deal, but the Sabres did not care to force him to go through the "bridge" contract, which has become so popular as a phrase this off-season.  The deal works out to be a 6-year contract, worth $25.5 million, which works out to be a $4.25 million cap hit for each season.  The deal is considered to be fairly long term, but the cap hit, if the production is right, works out for the club with a very reasonable cap hit for a top one or two centre.

In the 2013 season, Hodgson's first full season with Buffalo, he scored 15 goals and 19 assists in all 48 games for the Sabres, finishing 2nd in team pool scoring (Thomas Vanek was 1st, Ryan Miller was 3rd), 73rd overall among all players.

Now, looking ahead to his second full season with the Sabres, he should be given every opportunity to be the top line guy, with Vanek, and I think he should have many more ups than he should have downs, especially given his ice-time and I think he can match Vanek, step-for-step, this season in scoring.  He might be the shot in the arm that the retooling Sabres need to attract some more talent and wins. 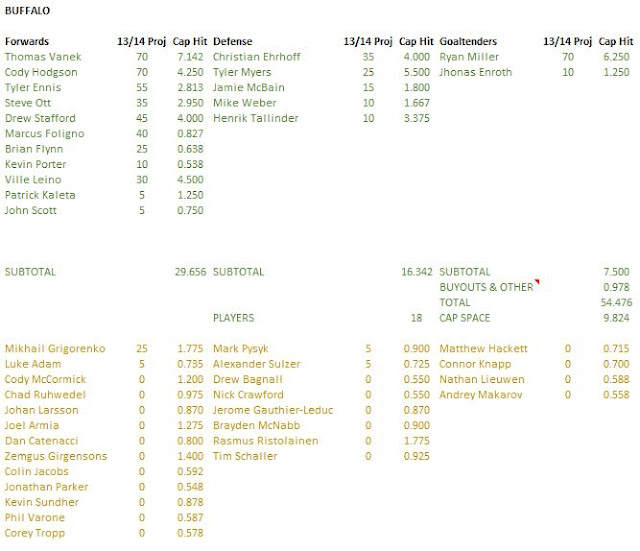 The Sabres have some roster spots to fill and they have all kinds of space to play with.  Going into camp, there will be nothing holding back some of the top talent in the Sabres organization from making this team, which is a huge plus.  Upwards of five spots open, $9.8 million to work with... that's easy and comfortable math to play with.
Posted by opiatedsherpa at 6:59 PM