Only two more weeks to go this season and we have quite a bit left to play for, as the race for 1st place is still hot and the race for 3rd place is still very exciting.  First, however, let's look back on the week that was and see where we all stand, as we head into the home stretch.

The new face of the NHL has joined the party of players that have earned a couple of Player of the Week nods this season, as Connor McDavid of the Edmonton Oilers defeated Dallas Stars goalie Kari Lehtonen in the tie-breaker, finishing with 8 points, atop of the weekly scoring standings.

This brings McDavid's season totals up to 88 points, which is tops among all skaters, but he currently ranks 3rd in the overall pool scoring race, just behind Sergei Bobrovsky of the Blue Jackets and Braden Holtby of the Capitals.  McDavid was taken with the 2nd overall pick, just behind Holtby, and he is certainly living up to his draft position for Stacey C..  Unfortunately, the rest of his team didn't live up to those high standards.

It's back-to-back weeks where the Mover & Shaker of the week moved into the money spots, as Eric's team was best in Week Twenty-Four, jumping back up from 5th place, into 3rd, with his 34-point week.  With only two weeks of hockey left to play in this regular season, now is the right time for teams to get hot.  We'll touch more on the race for 3rd place in a bit, but it is certainly tucking itself in for a good finish. 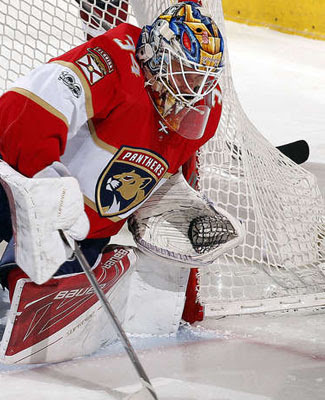 It was mostly in the goaltending for Eric's team this week, as both of his goalies, Jonathan Bernier of the Ducks and James Reimer of the Panthers both finished the week with 6 points a piece.  Both goalies have had to step up to the plate, as their respective number one goalies had gone down with injuries recently and they have both been able to pick up some of the slack.

Jamie Benn of the Stars also had a good week, picking up 4 points, while Viktor Arvidsson of the Predators, Patrick Marleau of the Sharks and Jaden Schwartz of the Blues all picked up 3 points.

Eric's team has been on quite the run of goal scoring of late, becoming the second team in the pool to hit the 200-goal mark, trailing only Brenda & Seward for top spot in the category, as they have 204 after this week.  His team continues to get pucks to the net, as his team also ranks second in the pool for shots on goal this season (1,953) and then seventh in the pool in shooting percentage (10.24%).  His team actually is ranked well in most of the major categories, scoring from his forwards and defensemen have been good, while the third segment from his goaltending has been quite good, coming around at the right time.

His team sits rather comfortably right now, 10 points back of 2nd, 6 points up on 4th, so there is a comfortable buffer for that 3rd place money, but we all know how long those buffer zones can last.

Three players were able to pick up 2 points each for Cam this week, to lead his team, and they were Jaromir Jagr of the Panthers, Brayden Schenn of the Flyers and Ian Cole of the Penguins.

Cam's team has been in a free fall since the start of the third segment, where his team was in the money conversation, but since has now fallen down to 13th place and if his team continues to play cold, his team could drop even further with teams coming up from behind him.

Brian continues to lead the pool, but his lead shrunk back down to 4 points over Dale B. and both teams were having decent weeks, so they still may not be caught from behind.  Dale's lead over 3rd place, which is now held by Eric, is 10 points.  A 10 or a 14-point gap could still be overcome, which still makes this race very intriguing.

Three teams are still aiming to move into the money spots, but they all lost ground on the money this past week, so they need to find some extra points over the next couple weeks to get the job done.  Brenda & Seward are 6 points out of 3rd, Marcie's team is 7 points back and Ryan's team is now 11 points back.

Well, it looks like Marcie is going to run away with this pool as well, as her team's penalty minute lead is 80 minutes with a couple of weeks to go and no one has come close to those kind of numbers, especially when Marcie's team is still nickel and diming penalties.

Wilton's team was the goon team of the week, racking up 44 minutes in penalties in the week, but Marcie's team was still picking up 31 minutes, better than both Troy and Eric's team, the two closest teams in the pool.  I think this one is pretty well over now.

The Rogers Hometown Hockey game last night was supposed to have some of the league's best young players playing, but the Winnipeg Jets were without their scoring phenom, rookie Patrik Laine, due to a bout of the flu.  Laine is listed as out day-to-day and is currently questionable for the team's next game, Tuesday night in New Jersey.

Scott's rookies have been excellent this season, he's got enough of them.  Unfortunately, that was the only good part of his team, as they have made up 324 of his 560 total points, which isn't enough to be in the money race this year.
Posted by opiatedsherpa at 9:53 AM