Another week is in the books, we have a team that re-took 3rd place and we completed a second mini-game this week.  All these highlights and more... in the Week Twenty-Three Newsletter!

Well, I guess it's time to pile on to the bandwagon of outlets that claim their surprise that Brad Marchand has developed into a bonafide superstar this season, but it's true, no matter how much we still remember him as a giant pest.  The Boston Bruins forward has taken on the role of a leader by example in Boston and in Week Twenty-Three, his numbers did all the talking, leading the pool as well with 9 points.

Marchand and the Bruins played three games this week and the Little Ball of Hate was on fire in the week, picking up 5 goals and 4 assists in those games.  A 4-point night in Vancouver on Monday, including a hat-trick, kicked off the week, which was followed by a goal and an assist in Calgary on Wednesday and then a goal and 2 assists on Thursday in Edmonton.  He didn't even need any games on the weekend to defend his potential title, it was just his from the get-go.

There was always going to be a little bit of risk, nagging at the back of your mind, if you decided to take Marchand too early in the hockey pool draft this year, but after his showing at the World Cup, you really wanted to believe he was going to be the real deal at the NHL level.  He has been, if not more this season, now currently ranked 8th overall in pool scoring with 79 points, only 1 point back of the Art Ross title as well.  His name has jumped up into the Hart Trophy conversation, not that it means a lot to us, but it is a measure of his popularity, at least.

Cam took Marchand in the 4th round, 82nd overall, making him into one of the better bargain players in the pool this season, but he has been one of the few picks that has really worked out for Cam this season, as his team has taken a tumble from the top to the middle and that's about where he'll stay.

If it wasn't for a holiday weekend, I probably wouldn't have allowed for a proxy team (or three) to happen in the season, because it always seems to be a money winning formula. Take the heart out of picking a team, it'll win money. This appears to be a good case for Ryan's team, which has now earned its fourth Mover & Shaker nod of the season in 23 weeks.  If Ryan's internet connections savvy was just a touch better, it may have been a completely different story this season.  (Ha!) 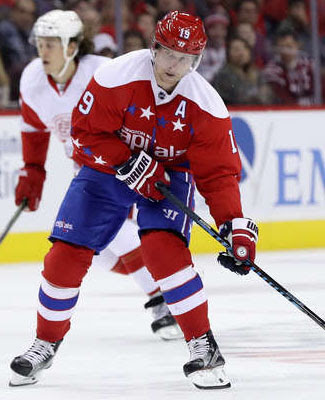 Ryan's team hit 38 points in the week and that vaulted his team back into 3rd place in the standings, a spot which he held only two weeks previous.  Ryan's team fell down to 6th place in Week Twenty-Two, so that's still a possibility, since the race is still tight, but we'll touch on that shortly.

The big week can be attributed to Nicklas Backstrom of the Capitals, who finished with 7 points, Carolina defenseman Jaccob Slavin with 6 points, David Pastrnak of the Bruins with 5 points and Mats Zuccarello of the Rangers, who had 4 points.  Slavin was the only player of the four that Ryan actually picked, thanks to the Waiver Draft, so he can take some credit in there somewhere, I guess.

The forward group that Ryan has continues to dominate the pool, as they now have a combined 415 points through Week Twenty-Three, which is 26 points better than Brian's team, which is in 2nd in the category.  Ryan's team is also 3rd in the third segment of the season, trailing only Eric and Mike, both teams that still trail Ryan's team in the standings, which means there is still potential for some movement up in the standings, if this hot streak continues.

Could this hot streak possibly continue?

Wilton and Troy are now fighting for the Basement Dweller nods, as it may have been projected to be in the last few weeks and this week, they go head-to-head in the tie-breakers, since they both finished with 16 points in the week.  First up, goals for... and by an 8-7 margin, Wilton avoids the title for this week, leaving Troy to take back-to-back titles for a second time this season.

This was, of course, the risk these teams were going to take with the goon squads they acquired through the Waiver Draft.  There is still no intention of changing the nod for non-goon teams to get, since this is really easy to write in the latter part of the season.  There is just no need to expand on it further, because we all know why this is happening.

So, now we go back up to the top of the table to see what the real races are like.

Brian's team was 6 points better than Dale B.'s in the week, breaking the tie and adding some space between the two sides.  Neither team was nearly as good as Ryan's Mover & Shaker team, so the gap to 3rd place certainly shrunk down to a manageable level with only three weeks left to go in the regular season.  Ryan now sits 12 points back of Dale's team and we might have some play left at the top, if Ryan's team stays hot.

Ryan's team also brought friends with him, as Brenda & Seward are only 2 points back and Eric's team is 4 points back, while Marcie still has something to say at 5 points back.  1st to 6th is 23 points with three weeks left to go and two huge Mover & Shaker weeks could really sort the race out, one way or another.  I think we're really in for a finish.

Three more weeks left in the season and for the most part, Marcie's team continues to hold a very reasonable lead, not too far from where it was at the end of the second Waiver Draft, which leads me to believe that this should be enough for her team to take down two of the three mini-games this season.

Marcie's team is now 77 minutes ahead of 4th place, which belongs to Troy and 76 minutes ahead of both Kristy & Don and Eric's team.  I don't think Marcie is going to be caught, unless these three teams have their goons make like the Hanson Brothers every night and just goon it up.

Derek B. had the goon team of the week, finishing with 45 minutes in penalties, but that doesn't help the race too much, because his team is still 14 minutes behind Troy's.

It's over!  John S.'s team could not find a win to save its life.  Devan Dubnyk was afforded another start by the Minnesota Wild on Sunday, making back-to-back starts and it didn't quite work out for the Wild, as they tried to make a game of it, after giving up a 4-0 lead to the Jets, but Winnipeg got the best of the game, winning 5-4 on a 3rd period goal from Josh Morrissey.

There wasn't anything very impressive about this past week, statistically, so I won't bore you with those numbers.  How about something new?

How's that for something a little different?

It sounds like Buffalo Sabres defenseman Cody Franson won't be in the lineup tonight when the team visits the Red Wings at Joe Louis Arena to kick off Week Twenty-Four.  There's no word on what the injury is, as of Sunday afternoon, but the injury did occur against Anaheim on Saturday night, so we'll wait and see if there is any more news.

Dale C.'s team is firmly entrenched in 22nd spot this season, 8 points behind 21st and 20 points ahead of 23rd.  The gap to move up might shrink, but there is very little chance his team will move down any further this season.

A stiff neck was the reason why Columbus forward Alexander Wennberg wasn't in the lineup on Sunday against the New Jersey Devils, more of a precautionary move, given that the Jackets are well inside the playoff picture, this late into the season. Wennberg has been great this year for the Jackets, picking up 12 goals and 54 points in 70 games this year, the second-best player taken in the 11th round of the draft this year.

This is another one of those proxy team picks, this time for Stacey C., but in Stacey's case, there wasn't nearly as much luck in the middle part of the season, as there normally is.  Stacey's team finished the week in 8th place, 25 points out of the money.
Posted by opiatedsherpa at 10:16 AM