The Columbus Blue Jackets are continuing to evolve and try to find the right mix for success in the league's Metropolitan Division, the toughest group of teams in the entire NHL and they have found some reasonable success at the regular season level.

The Jackets were a plucky group in the 2017 season, found some new sources of offense, saw some of their prized prospects evolve into everyday players and they also had the benefit of a healthy Sergei Bobrovsky as well, which, when you add it all up, comes out to 3rd place in the division, behind only the President's Trophy winners and the Stanley Cup winners.

Blue Jackets management wasn't going to be resting on their laurels in this off-season and some of that wasn't necessarily by their choice, but change was inevitable regardless.  They were able to swap their $6 million man for another, which should offer them more offense, free agency saw a breakout player head out of town, a buyout saw another veteran head to free agency and then Vegas played a big part in their summer as well.

On paper, the Jackets have a much different feeling to them, a year separated from their last projections post, but I think it's in a positive way.  Departures have made room for top prospects to get a longer look at camp, we've seen just how good their blueline was last year and the sky is the limit there and this team should still be very confident in their goaltending.  Columbus should be fun to watch again this year, they just need to keep plugging away and score a couple more goals. 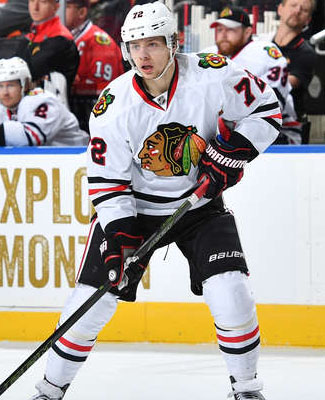 Well, you were crazy, if you thought this spot wouldn't be held down by Artemi Panarin, given his numbers playing in Chicago and getting moved to Columbus, as that shift certainly makes him into an intriguing player, heading into the 2018 regular season.

The question quickly becomes, "who does he play with?"  There's little doubt that Panarin has finish to his game, but he had a lot of service from one of the NHL's best today, Patrick Kane, and I don't see him on the Columbus roster at the moment.

Assuming he can stay healthy this season, Sergei Bobrovsky could be in line for another big year with the Jackets.  The defense in front of him remains solid and the addition of some more goal scoring makes this team a bit more dangerous, especially when Bobrovsky can steal wins throughout the season.  The Jackets appear to be fairly solid, so I would be poised and ready to jump on him, early on, if possible.

The forward group was pretty decent last season, but the additions make them dangerous.  The return of Cam Atkinson, Nick Foligno, Boone Jenner, Oliver Bjorkstrand and Brandon Dubinsky all have pool numbers on my list, while we add the 3rd overall pick in 2016's draft, Pierre-Luc Dubois to the mix as well, he should be a pretty good addition to this team too.

The Jackets are watching an impressive player blossom into a top defender in Seth Jones, as he has increased his scoring production year over year and could still move up the list this season.  His confidence should be through the roof heading into this season and he'll lead an impressive cast that also includes Zach Werenski, David Savard, Jack Johnson and Ryan Murray.  The Jackets have one of the league's top projected bluelines this year, so they'll be very popular this year.

Again, assuming Bobrovsky can stay healthy, it might be another quiet season for Joonas Korpisalo, who is slated to be the number two guy again for Columbus this season.  The 23-year old only appeared in 14 games last season, picking up 7 wins, but that wasn't enough to put him in the worthiness conversation.  I don't think he'd be good option for your team, unless he starts getting more starts.

Columbus has bit more depth on their roster, which could be good for some late round picks or even better mid-season injury solutions.  Forwards Josh Anderson and Matt Calvert could find their way into the pool, while rookie Gabriel Carlsson has a shot at making the roster on that excellent blueline.  These would be the three names I would keep a close eye on this year.

The Jackets still have two unsigned restricted free agents to deal with this summer, forwards Alexander Wennberg and Josh Anderson, both players really breaking out for the team last season.  The challenge for the Jackets will be to find the right price for both, as they should feature into this team's plans for a while yet.

The Jackets still have a bit of room to move with those two, since I am showing them with almost $12 million in unused space, but the management team in Columbus is very good at spending within their budget and getting the most out of what they spend.  This could be tough, if these two get greedy.

The Blue Jackets surely missed a healthy Nick Foligno in the playoffs, but a foot injury sidelined him for the elimination, but it doesn't sound like there should be any concern for the start of the 2018 season.  Brandon Dubinsky, on the other hand, did undergo off-season wrist surgery and as much as the timetable seemed promising for his return for the start of the season, he may just be one to keep an eye on at camp, just to make sure before diving too deep with a hockey pool pick.
Posted by opiatedsherpa at 1:50 AM