The Edmonton Oilers, all of a sudden, have an embarrassment of riches on their hands, but only so much cap space to put it under.  Yes, this is a problem for a few teams in the past, but for a number of those teams, the problems didn't really start until after they had won a Stanley Cup.

Now, it hasn't gotten to the point of the Oilers needing to sell off assets to make sure they can make the best team they can, fit under that cap ceiling, but it's damn close.  If this team is for real, if Connor McDavid is for real, which the latter is making a great case for the former, then it might not be very long before the championship sell-off begins.

By no means is this a guarantee that you can take to the bank, but no matter how much some people don't want to admit it or see it come to fruition, the Oilers have themselves a pretty solid bunch and for the hockey pool types, like ourselves, we have to be weighing our options with a few Oilers in the mix, here and there.

Days are gone where the average Oilers fan in your hockey pool could pick and choose his/her favourite players without contention.  They would have been mocked and shamed, but they would have been able to have their players.  No more!  I think we can all see where the next few years are going with this team and we could see as many as three Oilers go in the 1st round of the draft. 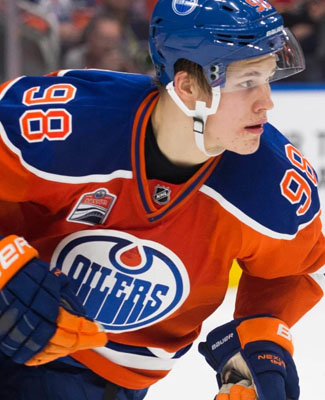 We already know about McDavid and Draisaitl, but there is still one more top prospect yet to come for the Oilers and that is there 2016 1st round pick, Jesse Puljujarvi.  The young Finn didn't quite get off to the desired start he want, despite it being with the big club, so off to the minors he went to help grow his game.

Of course, there was some disappointment, as the demotion likely got to him and gave him a slow start at the AHL level and a very poor showing at the World Juniors for Finland, but he soon got his act together and finished the AHL season with some very reasonable numbers, 28 points in 39 games.

It may still be a struggle for Puljujarvi to find the right amount of ice-time in the Oilers lineup, but that sort of ice-time that he wants will have to be earned and with the right coaching and preparation in the summer, he has the right skill set to earn those minutes and be a big producer at the NHL level.  Can he put it all together in the 2018 season?

The Edmonton Oilers are, all of a sudden, waist deep in hockey pool riches, offering up the pool's best skater last season, Connor McDavid, and the second best goalie, Cam Talbot, and another 1st round pick in Leon Draisaitl.  It's an impressive trio, to say the least, but as we'll explore a little bit later on, there's a reason why there are only two of them on the current projections list.  Nevertheless, the Oilers could be three deep before we even make it to the 2nd round.

New additions to the team, Jussi Jokinen and Ryan Strome, highlight the pool worthy forwards this time around, as both players should provide an impact, one way or another for these Oilers.  Milan Lucic, Ryan Nugent-Hopkins and Patrick Maroon are among the returning players who will carry major roles on this team.  This team is a tad top-heavy, but certainly in a way that isn't a detriment to their overall success.

The blueline has the benefit of throwing the puck out of the zone and one of their speedsters can jump on it and turn the clearance into a transitional chance, which bodes well for the defenseman offense numbers.  Oskar Klefbom, Adam Larsson, Kris Russell and Darnell Nurse will all start the season, healthy and ready to go, and I don't think you could go wrong with any of them this year.  This could very well be the year that Nurse breaks out as well, it's already year number three for him, so he could be the guy to really keep an eye out for.

Last season, the Oilers leaned heavily on Talbot, as he appeared in 73 games, leaving the tiniest of crumbs for his back-ups.  Heading into training camp, it looks like Laurent Brossoit will be that guy snapping up those crumbs, but one would have to think that it isn't ideal for Talbot to play so much, but will that be enough for Brossoit to earn pool worthy amounts of points?

With a couple of new faces moving into the lineup, there could be a couple bumps down the depth chart for a guy like Mark Letestu, Zack Kassian or Drake Caggiula, all three were either just inside or on the fringe of the pool depths and they are the most reasonable bets for late round picks, but I think there have been better options within the other teams.

The Oilers have the biggest fish of them all, left unsigned and that's forward Leon Draisaitl.  Since the start of the off-season, there was a lot of talk that he and McDavid would be looking for long-term deals with the Oilers and deals that would rival those of some pairings around the league.  That has yet to materialize for the 21-year old and now we're starting our off-season descent into training camp and things could get a little dicey.

I currently have the Oilers with $16.5 million in unused space, with a very reasonable 23-man projected roster, so it isn't this year that the Oilers are necessarily worried about.  It will be the years after, when Connor McDavid comes out of his entry-level contract and jumps into $12.5 million under the cap ceiling.  That's where the concern lies.

The Oilers were dealing with injuries right out of the playoffs, as they had announced that defenseman Andrej Sekera will get a late start to the 2018 season, due to a torn ACL, suffered in their last playoff series against the Ducks.  The prognosis was 6-to-9 months back in May, so his numbers are adjusted for the worst case scenario and it would be wise to stay away from him, come draft day.
Posted by opiatedsherpa at 1:35 AM