Despite having arguably the best goaltender in the league, the Montreal Canadiens have struggled mightily to support him with an adequate amount of goals. This was supposed to be the number one thing that the team needed address, but an odd summer led to the ins and outs from the lineup as being a wash, it would seem.

Nevertheless, the Canadiens may improved their young core, rather than spent a load of money on aging players, trying to win in the short-term, rather going for the long game, hoping that they can finally assemble a core group that can re-establish their tradition of winning.

On paper, the team looks a little more exciting, with the key addition of Jonathan Drouin to the mix, while the back end looks a little more stable with the addition of Karl Alzner through free agency.  The proof will be in the pudding though, as the Canadiens have made a habit of making pretty good looking deals on paper, only to fall short of the mark in recent years, finding a way to make an excuse, one way or another.

Of course, it's not all about the new faces, they had some underachieving players that have been around for a long time and it will be as much about them bouncing back, as it is about the new faces injecting that optimism to the club.  Tomas Plekanec and Brendan Gallagher find their names at the top of that list and if they can find a way to bounce back, the Habs are already ahead of the game. 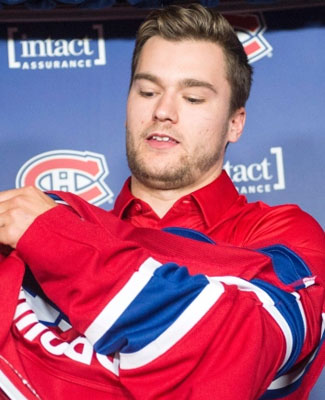 Bringing a highly-touted French player back to his home province is a big step for the Canadiens, as they try to keep a firm hold on their roots, but with that brings a lot of pressure on Jonathan Drouin.  A former junior star in the QMJHL, Drouin took a while to finally get his feet underneath him at the NHL level, but he did seem to find his way in the 2017 season, as he emerged as a viable offensive threat with the Lightning.

If only to add a little more pressure, the Canadiens had to deal their best prospect, defenseman Mikhail Sergachev to get their new gem, which means they have mortgaged a little bit of their future on this endeavour, which makes this player's story line that much more intriguing.

The combination of Drouin and Alex Galchenyuk is what we're all going to be looking at, heading into training camp and in theory, it could work quite well.  Both are quite offensive, they skate well and we now wait to see what the chemistry is going to be like.  As of right now, I think they're both solid options for your hockey pool team, both in the 60-point range, in a conservative estimate.

As much as this team would love to have a forward slotted in an opening round selection, their only top player is their best player, the backbone of the team, goaltender Carey Price.  The race in the Atlantic Division is going to be tight and Price is going to have to be on his game this year, which would be a huge windfall for the team that picks him up in the pool.  He certainly has a shot at top spot in pool scoring, but the team in front of him have to play a bit better too.

The forward group will get that infusion of Drouin, which will hopefully aid in either keeping some numbers up or getting a couple other players to bounce back.  Including Drouin, I have seven Habs on the list as being potentially worthy, including Max Pacioretty, Alex Galchenyuk, Brendan Gallagher, Paul Byron, Philip Danault and Tomas Plekanec.  If Plekanec can find his way back into being worthy this year, I think the Habs have a great shot at much better things in the spring.

The free agent addition of Mark Streit could be the most cost efficient add to a blueline in this off-season, as the veteran comes on for less than a million dollars and could really make up for some of that offense that left via trade and free agency this year.  Shea Weber, Jeff Petry and another newcomer, David Schlemko, should help to run the offense from the back end and make the Canadiens into an impressive side.

Last year's back-up competition went to Al Montoya, who clearly took the job away from Mike Condon and it saw Condon dealt to Ottawa, shortly into the regular season.  Montoya played well last season, when called upon, and we should expect no different, both in terms of workload and results.

There are a few names on the list that might be worth while taking a risk on, late in the draft, from Montreal.  Andrew Shaw needs to find his way back to relevance, while Karl Alzner and Jordie Benn could still find their way into enough points for the conversation.  I know there are a few gamblers in my pool that like Montreal, so we'll see how that pans out.

Max Friberg appears to be the only restricted free agent left on their list of things to do this summer, but he's destined for the AHL.  I can't see the Canadiens shopping for much more at this point.

Even with $7 million in unused space, that could be better used after they get a peek at how this team comes together in training camp.

The Canadiens took a flyer on the injury prone Ales Hemsky, who missed a lot of time due to a hip problem in the 2017 season and if they can get 40 games from the 33-year old, they add a little bit more offense, but even that seems like a bit of a stretch, given his history.  Andrew Shaw suffered a concussion in the playoffs last year, so he'll be one to keep a close eye on, while Karl Alzner should be all recovered from a broken bone in his hand, ready to start his time in Montreal
Posted by opiatedsherpa at 1:15 AM