It's definitely going to be a different San Jose Sharks team in the 2018 season, not having Patrick Marleau around... and I don't think it's necessarily for the better either.

Yes, the long-time Sharks forward has departed for a longer-term contract in Toronto and his former team will be forced to be a lot younger in the 2018 season and this is certainly going to be a big test for this team.

San Jose is going to be solid again from the goaltending crease to the blueline, there's no doubt, as Martin Jones has done well, so far, as the number one goalie in the tank, while Brent Burns has emerged as the league's premier scoring defenseman, which expectations will remain high for the upcoming season.

Still, an aging Joe Thornton, an underachieving Mikkel Boedker, an oft-injured Tomas Hertl and other assorted young players, are going to have to carry the load behind Joe Pavelski and Logan Couture and there just isn't any guarantees that this formula is going to work in the upcoming year.

There were plenty of health issues with last season's Sharks team, losing plenty of man-games to injury, which kept their numbers down, except for their wins, but they won't have the same kind of leadership core without Marleau and that makes me somewhat skeptical.  The one big plus for this team is that they are in the Pacific, where the Kings, Coyotes and Canucks are all still ripe for the picking, which should help their record stay strong. 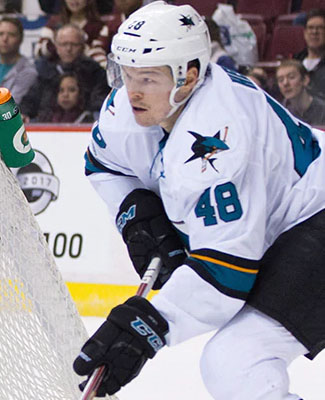 The San Jose Sharks, historically, have had more than their fair share of one-hit wonders, playing on the wing, scoring a bunch of goals one season, making a name for himself and then completely falling off the map not long afterwards.  It doesn't seem unreasonable to think that Tomas Hertl could be one of those players now, after an injury-plagued 2017 campaign, he has to be one of those players that steps up and starts to score again or the Sharks are really going to struggle.

Hertl has topped out at 21 goals in the 2016 season, which is a pretty good total by today's standards, not exactly a Jonathan Cheechoo-type season, but still pretty good, and that's where he needs to be, if not better in the 2018 season.  I don't know how tangible this request actually is, as my projections only have him in and around the 40-point mark today, but if he can find the right chemistry on his line, he could live up to the 1st round billing in his draft year more comfortably.

The top scoring defenseman in the hockey pool last year, Brent Burns, leads the way for the San Jose Sharks, ahead of the 2018 season.  Burns was almost a point a game player last season and I think he can get there this season, if everything pans out.  And if Burns is a point a game player, Martin Jones is a keeper that you'll want to jump on early.  The Sharks play well in front of him and there's still some upside to achieve this year.

It's certainly going to be a bit different, not having Patrick Marleau among this crowd, but this is the reality that we're in.  Joe Pavelski, Logan Couture, Joe Thornton and a bounce back season from Mikkel Boedker all appear to be on the docket for the Sharks, not to mention a bunch of players to be named later, who could also find their way up.  It's going to be a different looking Sharks team, but I think they've progressed in the right direction.

Marc-Edouard Vlasic and Paul Martin were the only other two blueliners that really jumped out at me during the projection process, Vlasic has been up and down a bit, but still a consistent pool presence, while Martin finally found his groove with the Sharks last season, increasing his production enough to make the move in.

Being a relative unknown through not really seeing him, who knew Aaron Dell was going to be as capable as a backup as he was?  Okay, the Sharks probably did, but I digress.  Yes, Dell turned out to be a very good go-to guy, when Jones needed a night off and I would expect the same again from the 28-year old.  If you're struggling for a goalie late, Dell might not get all the starts, but he should still be worthy.

The Sharks have lots of options, just on the outside looking in.  If you have the feeling that they are going to shoot out the lights this season, then by all means, increase the projections on these guys: Jannik Hansen, Melker Karlsson, Chris Tierney, Joel Ward, Joonas Donskoi and/or Kevin Labanc.  It's a hard working bunch and they could all sleeper their way into the good rankings.

Last week, the Sharks took care of their last restricted free agent on the books, forward Barclay Goodrow, who is more of a depth player, but he'll be ready to compete for a job in training camp with his new 2-year deal.

The Sharks appear to be rather comfortable in their current projected configuration, as I am showing under $5.2 million in unused cap space in the middle of August.  There are a couple of bubble players on this roster, who could make way for others, but San Jose's management team have done well to afford that.

The San Jose Sharks were not short on off-season surgeries, as they were going through the playoffs as a hurting bunch.  Joe Thornton required major knee surgery for his ligaments, a surgery deemed successful and he is expected back for training camp.  Tomas Hertl played on a broken foot, which also should be healed in time for camp.  Finally, Joel Ward had minor shoulder surgery in the off-season, nothing to really be concerned about, this far into the summer.  As of right now, there's nothing to be concerned about, pool-wise.
Posted by opiatedsherpa at 12:35 AM