The Boston Bruins have not been in the playoffs for the last couple of seasons, but it may not have been reflected as accurately in the scoring statistics, as the Bruins have still managed to put some players in the top end of the rankings, especially last season.  The Bruins have still managed to have a player worthy of a 1st round selection and it shouldn't come as any surprise that it's Tuukka Rask, who gets the bulk of the ice-time in the crease.

The major task this season will be to improve upon those standings, even just by a little bit, trying to push themselves back into at least the wild card spots and the addition of David Backes through free agency might be the boost that they were looking for.  The former captain of the Blues should be able to fit into what the Bruins are all about and also provide some much-needed grit in their top six.

Yes, for the most part, the formula remains the same for the Bruins, as a good portion of the core remains the same to start the 2017 season, just with that slight addition of Backes.  On the surface, it is really questionable, as to whether he is enough to lift them into that playoff spot, divisional or wild card.  One would have to believe that Montreal will be back in form, while Buffalo and Toronto will also make serious strides.  The Bruins will have to defend their spot, as much as they are chasing down the three teams that finished ahead of them last season, so this won't be any picnic.

I'm not sure the Bruins can afford to miss the playoffs again, especially with Zdeno Chara turning 40 in March, as he has been the strongest pillar of this team for too long and doesn't have much time left. 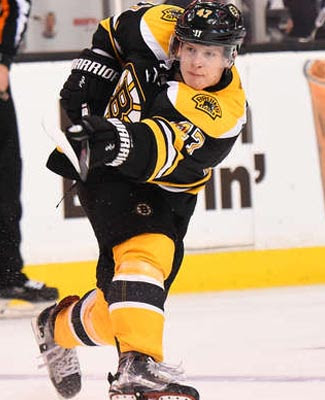 Krug has really come along in the early part of his career and now the 25-year old should be looking to be that guy to guide his team moving forward.  A solid season should warrant at least 50 points for the pivot and one should assume that he would better his 4-goal total that he had in the 2016 season, just by default.  I am truly looking for him to break out this coming season.

Usually having a goalie that is 1st round worthy is a good sign that your team is probably going to make the playoffs, so with the inclination that Tuukka Rask isn't in that bracket, according to these numbers, it's not a good sign.  Rask can't feel too badly though, I don't have any Bruins worthy of the round, but that isn't to say that someone isn't going to take a chance on him, come October 8th.

The Bruins will have plenty of pool options at the forward ranks between Patrice Bergeron & David Krejci, down to Frank Vatrano, who emerged last season as a decent name.  One guy you may want to take a look at for a bargain pick would be Ryan Spooner, who has been slowly creeping up the ranks for the Bruins and should be a good option in the mid-to-high rounds.

Having four pool worthy defenders is going to be helpful, starting with Torey Krug and Zdeno Chara, down to Colin Miller and John-Michael Liles.  By helpful, I do mean for the hockey pool, as three of the four on the list are not exactly strong defensively, which could be one of their biggest downfalls.  That's not what we're looking for here, however.

This is still Rask's team, but the back-up job could be still open.  Anton Khudobin was signed as an unrestricted free agent and likely has the inside track for the job, but the Bruins do have a couple of kids in Malcolm Subban and Zane McIntyre, who could emerge.

Since your regular season pool doesn't generally bleed into the playoffs, you're going to have a pretty reasonable bet out of these Bruins, since they will be scoring for you, a lot of times from a depth position.  If you're looking for a player in those late rounds, trying for a bit of a sleeper, you might be able to find something from Boston.

The Bruins were done most of their key free agent work early on in the summer, so there wasn't much left to do when August rolled around.  There are some restricted free agents left to deal with, but they don't hold any pool value at this point.

The 23-man projected roster we have for the Bruins is also coming in at a reasonable cost, leaving about $5.3 million from the ceiling.  If the Bruins get off to a slow start, which they might, there is plenty of dollars left to go around to help their cause, more likely via the trade market.

At the end of the 2016 season, the Bruins were a hurting group of guys, but an off-season to heal up is just what the doctor ordered and it doesn't appear like the Bruins will have any issues, when camp opens up this year, barring any problems at the World Cup, that is.
Posted by opiatedsherpa at 2:15 AM