The Calgary Flames have worked themselves into some high expectations, heading into the 2017 season, but they are still not short on work to be done before getting to puck drop.

On the surface, the team has taken some strides to solidify their core and they have built around a blueprint with some quality young scoring talent and a solid blueline, adding a couple blue collar goaltenders, a rugged veteran and in all likelihood, products of their youth system.

Will it be enough though?  The Pacific Division will be priding itself on its speed and its depth and the Flames might still a little bit short, especially in the depth department, unless some of that youth movement really picks up its socks.  After the top six, it looks like there will be a bit of a mish-mash in the forward ranks and finding that consistent lineup will be key in the team's long-term success.

For us poolies, there is quite a bit to be excited about from the Flames, as they have a solid number of players that should feature in the hockey pool draft, at various stages.  They certainly have the potential to put the puck in the net and/or keep the puck out of their net, so we'll wait to see how many games they can put those two things together. 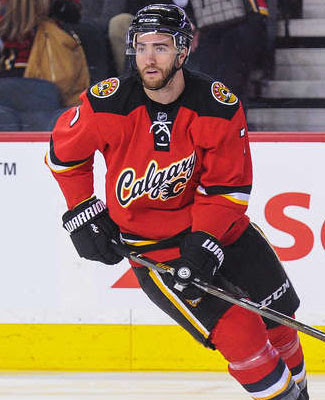 Not getting a full season in during the 2016 campaign hurt T.J. Brodie and his career numbers, as a whole, but his upside is certainly there and he has developed into the team's best defenseman, especially on the offensive side of the game.

Brodie skates exceptionally well and is really starting to move the puck like a top end offensive defender and as the offense around him starts to mature, they will certainly translate what he brings to the table into tangible offensive numbers and it could be as quick as this season.

The offense from Johnny Gaudreau is legitimate and he's lifted himself into the group of players that are putting up 1st round numbers, finishing with 78 points, 15th overall in scoring.  He will be asked to carry this team in 2017 and he should be able to put up some numbers, but it's not necessarily a guarantee that it will translate into wins for the team.

One would have to expect that Sean Monahan won't be too far behind in the draft, following his partner in crime.  Those two will be closely related, as they already have been in the past couple of seasons.  Throw Mikael Backlund and Sam Bennett into the mix, followed by their new rugged veteran in Troy Brouwer and they have a good group of forwards ready for consumption in the draft.

Arguably, the defense for the Flames is their strong suit, as T.J. Brodie, Mark Giordano, Dougie Hamilton and Dennis Wideman make up a foursome that can rival any other team, both in scoring production and cap value, as they are coming in at a combined $22.4 million.  Once the minutes getting divvied out properly, these four should really be able to rack up some points.

One high priority point on the Flames' off-season list of things to do was to improve their goaltending and they did just that, going out and getting the often-underrated Brian Elliott out of St. Louis to take over the starting role and then they added insurance in Chad Johnson, who ended up being the starter for Buffalo on a temporary basis.  Both are battlers and capable of taking on minutes, it will be a matter of how well the team plays in front of them for their level of success.

If you're looking at the Flames in the late rounds, you're banking on that depth to find some traction and add some scoring for a run to a playoff spot.  There is certainly some potential in this club and it would be hard to argue against picking some of their depth, as it appears to be a pretty good gamble.

The only way Gaudreau is going to be a 1st round pick is if the Flames get his deal done.  Both Gaudreau and Monahan are still without deals, even this deep into the middle of August, but you have to imagine that they will get done.

The remainder of the Flames' free agent signings are hinging on these two contracts, which have some real potential to be big and with only $14 million (or so) left to spend underneath the cap ceiling, it actually isn't very much, when you take into account that their budding superstars are likely looking for around $6 million each.
Posted by opiatedsherpa at 2:05 AM