On Thursday, the Colorado Avalanche and their head coach, Patrick Roy, parted ways, reportedly on the differences about player personnel decisions, just before this post was getting polished off, so the timing really couldn't have been better here.

The Avalanche were under Roy's tutelage for three seasons, the first being a pretty good breakthrough for a young team, but they failed to repeat that sort of success, despite adding some top end prospects and making some big moves.

It's unclear today what direction the Avalanche may go in with their new coaching decision and the systems they may employ with a new staff, but for the most part, the projections that I have in place were based on the team as a whole and less about the system, but there could be some adjustments made, once the new coach is in place and we know what he's all about.

The Avalanche certainly have the talent to make for a good team for us poolies to pick from, as they have some superstars in the making, a solid number one goalie and a defense that may have underachieved offensively, but could break out at any time.  Here's what I'm looking at for the Avalanche, as we move towards the measuring part of the off-season. 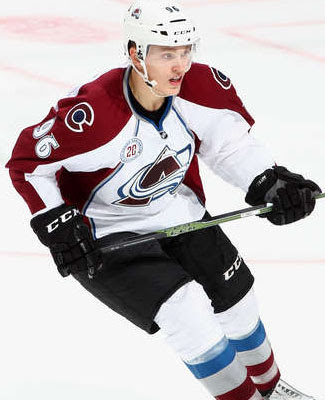 The Avalanche wanted to see their 1st round pick in the 2015 draft make their lineup last year, but Mikko Rantanen wasn't able to pick up any points in his first nine games, so he was sent down to the AHL, thanks to his training in Europe qualifying him to play in the minors.  Down in the AHL, he absolutely ripped it up with the San Antonio Rampage, picking up 60 points in 52 games and got a better taste of the pro game as a 19-year old.

Now, he gets to try and apply what he learned in the AHL up with the big club again, starting in training camp and the Avalanche have spots to fill in their lineup, so it adds up well for him.  The 10th overall pick in 2015 might be a good player to hang on to this season.

The Avs don't have any opening round projections on the list at this point of the Summer, but they have a trio of players who are not far away and could be worthy of the pick by the end of the year, because exceeding expectations is something Colorado is capable of doing.

One of these years, likely sooner, rather than later, Nathan MacKinnon will fill into his shoes and will be that 1st round pick, but for now, he will try to realize a high round pick worth of points and he could really be a bargain pick, if he's passed over enough times.  Matt Duchene and Gabriel Landeskog are still going to be big pieces of this team, while Carl Soderberg continues to grow and Jarome Iginla tries to impart his veteran wisdom.

As much as Tyson Barrie was on the trade block for most of the Summer, once he signed his new deal, he looks to be locked in to the future plans, which gives the Avalanche a proper hockey pool defenseman, offensively.  Francois Beauchemin and Erik Johnson will continue to support, but they won't be the big draw.

It appears to be Semyon Varlamov, with a side of Calvin Pickard, in net for the Avalanche in the coming season and both should be worthy of a selection in the hockey pool, just at opposite ends of the draft.  Varlamov could go in the opening round, but I'm not buying into the Avalanche that much, so a solid 2nd round pick would be good for him and I would try to lock up Pickard late, if possible.

In terms of late picks, I think you can find a pick or two out of the Avalanche.  I didn't even highlight a guy like Joe Colborne yet, who will get a new chance in Denver or even defenseman Eric Gelinas, also getting a fresh start.  Those are two players you might be able to sneak out of a long draft and they could come up trumps for you.

Colorado had a lot of work to do this Summer and they got through it all in pretty good time, with the signing of Barrie being the cherry on top.

The projected 23-man roster comes in with about $630,000 left to spare under the cap ceiling, which may mean they'll start with 21 or 22 players to start the season, giving themselves a little bit more breathing room, but they should be confident in knowing that they will all fit in there for now.

The big superstar, Nathan MacKinnon, missed the last part of the season with a knee injury, but that was ever so long ago, his participation with Team North America in the World Cup is all but assured and that will give him quite the boost into the regular season.
Posted by opiatedsherpa at 1:50 AM