All hail the champs!  The Pittsburgh Penguins will start their title defense with a lineup that didn't stray too far away from how the season finished against the San Jose Sharks.  I will also say it again, because it generally rings true, the champs are going to be popular at the draft, so be prepared.

The Penguins are certainly an interesting bunch, which really stepped up come playoff time, leaving much to the imagination, when we all made it into the playoffs and wondered if they would even make it out of the opening round.

Playoff successes don't necessarily translate into regular season successes the next year and I think there are a number of star players that have shown that and there were a good number of those Cinderella stories, playoff dark horses, who have done much of the same.  Your job, if you choose to accept it, will be to separate the Cinderella players from the actual stars that do it night in and night out.  These guys are the champs, how can they not be worth the gamble, right?

There are still a number of big question marks on this team, which will get sorted as we watch through training camp. 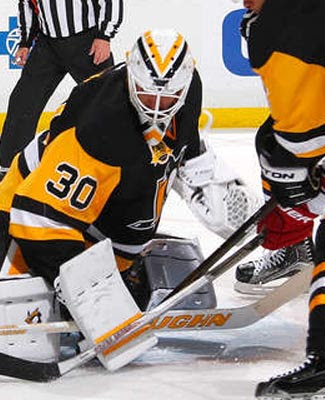 How intriguing is the Pittsburgh Penguins' goaltending situation? I would say 'very.' The playoff darling that was Matt Murray is thought to be the team's number one after his run to a Stanley Cup win, but I may be a bit hesitant to hand it over to him right away... well, not before training camp anyway.

I don't think there is any doubt that the Penguins believe that he is their number one of the future, but a strong playoff run doesn't necessarily make for an awesome regular season, the next year.

Murray will be given every opportunity to take the job, but if there is any complacency to his thought processes, he could drop off quite quickly and this is the one reason why Marc-Andre Fleury has been kept around for now.  Someone is bound to buy high on Murray and it will be a reasonable gamble, but I think there are some things to consider with a young goalie like him.

The Penguins won't be short on 1st round picks, the champs rarely are.  The immediate thoughts go to Sidney Crosby and Evgeni Malkin, they should be locks for an opening round selection, while the rush on defensemen could see Kris Letang jump into the mix as well.  But if you have been paying attention to the injury prone posts, all three of these characters come with significant risk, so I would tread carefully, whilst being excited.

Will the HBK line be remembered at your draft?  Will they go above where they should be drafted, because they were just that good during the playoffs?  Carl Hagelin, Nick Bonino and Phil Kessel all were tremendous as a group and they will draw a lot of attention.  Kessel's regular season numbers were not as great as we projected last time around, but they still were not too bad.  Hagelin and Bonino, on the other hand, really stepped up when needed.  Patric Hornqvist and Chris Kunitz are still around and each should have enough ice-time to make a difference, so take them into consideration.

It's a bit of a drop-off after Letang on the Pens' blueline, where Trevor Daley and Olli Maatta reside, but either of them could be better than these projections, given the right circumstances.  A contract renewal for Justin Schultz was a sign of good faith, saying that he stepped up when needed in the playoffs, but we're sure glad you took that pay cut.

There is a part of me, no matter how intriguing Matt Murray may be to the overall future of the Penguins, I still think there will be some familiarity realized with Marc-Andre Fleury, especially in the long grind of the regular season, which will keep him right in the mix.  As long as these two are on the same team, I can see a pretty good split of time and I would tip my hand towards Fleury, not buying too high on either of them at the draft.

Of course!  How did those lovable 3rd and 4th line players not capture your heart during that run to the Cup?  Okay, maybe that's a little too far, as this is for a hockey pool, after all.  According to an early mock draft, the Penguins will appear early and often throughout the pool, so there will be names that filter down to the bottom and they could end up being some pretty good bargains.  How about defenseman Brian Dumoulin?

The Penguins are clear of all their restricted free agent negotiations and they will be letting go of some unrestricted help, like forward Matt Cullen, who is still unsigned.

The Penguins would probably love to have him back, but it would have to be at a signifcantly discounted rate, as they are already over the cap ceiling, with LTIR help from Pascal Dupuis' contract, but that would be a hard sell.  Pittsburgh is another one of those teams that could really do well to dump a big salary and possibly get rid of a positional controversy at the same time.

One of my one's to watch from the Pool Outlook in the Spring, forward Daniel Sprong, ended up having off-season shoulder surgery and it was considered to be quite major.  Sprong, from the middle of June, was expected to be out between 6-to-8 months, which would see him back around February, at the latest.  Quite disappointing, to say the least.
Posted by opiatedsherpa at 12:35 AM