Life without Pavel Datstyuk, it begins now for the Detroit Red Wings.  How do you replace a player like Datsyuk?  You don't really.  You move on with whatever you can get and it wasn't like the Red Wings were sitting back in the off-season, waiting for their beloved two-way Russian to come back, apologize and suit up again.  Not that he could, his rights were dealt to Arizona, but you know what I mean.

The Wings added a couple new faces in Frans Nielsen and Thomas Vanek, trying to help out their scoring, while they re-signed their number one goalie, Petr Mrazek, to a new deal and they'll hope that last year's rookie of the year candidate, Dylan Larkin, doesn't suffer through the sophomore slump and all should be well and a return to the playoffs would be in order.

With the new faces in place and the returning cast already capable of good results, the Red Wings could very well be a force to be reckoned with again.  I do have a feeling that the Detroit season will hinge mainly on their younger scorers, with the veterans on the team finally taking off the training wheels for this new batch of stars and letting them go, but like any good parent watching their kid ride away for the first time, they won't be too far away, just in case of some speed wobbles. 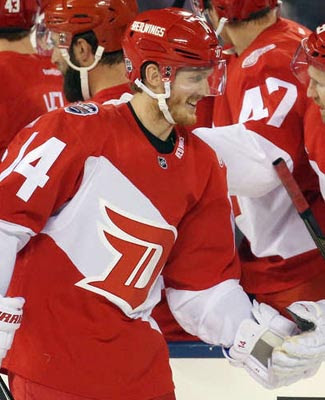 As you can see with the projection table above, I have Gustav Nyquist as the guy taking the reins and making a name for himself atop the forward scoring ranks.

Nyquist has shown some flashes in the early part of his NHL career and will have to amp up the brilliance a little bit more, since his team will be squeezing every little bit offense where they can in their lineup.  Last season, he featured mostly with Riley Sheahan and Tomas Tatar, but with the shuffle of bodies in and out of the organization, you would think that his talent will try to be paired up with some of that new offensive flair.

If Nyquist breaks out like I think he might, I think a 30-goal season is certainly in order for him.

Since the Red Wings have two goalies they can certainly trust, it divides the ice-time a little more evenly than other one-two combinations.  That limits the projection for a guy like Petr Mrazek, who you can argue to be a 1st round pick, but I would be really happy if I was to get him in the next round.

The Wings should spread themselves out pretty well in this draft, as there is a good number of players to choose from.  I am not convinced that they'll have amazing seasons, but picked in the right spot, they shouldn't disappoint.  Henrik Zetterberg could do better than this initial projection, depending on who his wingers end up being and I am going to be very hesitant on buying high on Dylan Larkin, as the sophomore jinx could be real for him.

Mike Green and Niklas Kronwall are the experienced pair and depending on their health, they are expected to have okay seasons.  This could be the year that Danny DeKeyser finally breaks out of his shell though, signing a brand new deal in this off-season, I am sure that the Red Wings would be more than happy to put a bit more responsibility on his plate to see what he does.

How comfortable are the Red Wings, having two goalies taking up $9.3 million in cap space?  Well, I'm sure they could find a number of socially awkward situations that they would rather be in, but they have to deal with this one.  Petr Mrazek is the number one, he'll get the better of the split, but Jimmy Howard still has some fight left in him and should do well with his time, trying to help convince another NHL team to acquire him and give him the reins.

The Red Wings' depth hasn't been something to celebrate in recent years, as they have been fairly spotty as the years go.  I think it was much harder to pick and choose some of these players as safe, while some of these wild cards, like Andreas Athanasiou would emerge out of left field and turn some heads.  Would this be the year of an Anthony Mantha or Martin Frk?  I suppose we'll see, but I don't think I'll be gambling on them this year.

The Red Wings do have some outstanding restricted free agents on their books, but none of them were going to be all that essential to their upcoming season, most would toil in the minors for another season, at the very least.  Kyle Quincey still remains without a contract as an unrestricted free agent and the 31-year old will likely try and find a tryout somewhere before the season starts.

The Long-Term Injured Reserve is prepared to be the Red Wings' best friend this season, as they currently have a projected 25-man roster, which includes two injured players, $4.7 million over the cap ceiling and a projected $5.1 million in possible LTIR aid.  It's a pretty ugly situation, one that could certainly handcuff this team in the long run.  I would imagine that the Red Wings will run very lean this year, likely keeping their roster at 21 or 22 players until they can sort out a better solution.

It was highlighted back in July, that the Red Wings are not expecting to have either Johan Franzen or Joe Vitale in their lineup for the coming season and there are some more question marks about forward Teemu Pulkkinen, who underwent off-season shoulder surgery and could be late to the party and will likely start the season in the minors, once healthy.
Posted by opiatedsherpa at 1:35 AM