The Buffalo Sabres have been busy in the off-season and all of that hard work they have been putting in should be fruitful, if everything goes the way it should.

Key additions through free agency and the trade market have certainly boosted the credibility of this lineup and the Sabres might be able to take advantage of their division still being in a state of flux, rebuilding and retooling teams alike.  Adding a power forward like Kyle Okposo should provide some more offensive presence, while Dmitry Kulikov still has some potential to be a point producing defender in the league.

These additions, plus their key draft picks over the last few years, could very well lead the Sabres back into the playoffs and they will have just as good of a chance as any, as long as their goaltending hits their stride at the right time.  With the way parity is shaping the league, the Sabres have certainly worked their way into a favourable position and immediate success isn't out of the question, heading into the 2017 season. 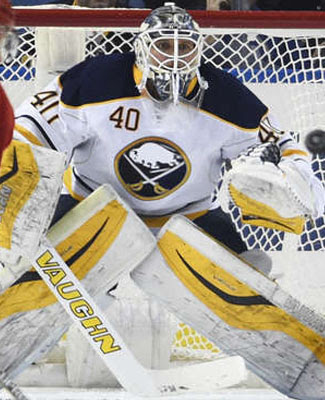 Are we finally going to see what Robin Lehner can truly bring to the Buffalo Sabres?  Lehner was picked up from the Ottawa Senators to be their number one goalie in 2015 in a package deal that saw a 1st round pick go the other way, so they were putting a lot on this move, but got very little last season, due to injury.

Now, it's a new season, Lehner is healthy and he won't likely be challenged too much by the depth that is behind him, so it's his crease to start the season and he'll be a big part of where the Sabres finish up in the regular season.

When we look at this roster above, Jack Eichel is the only real standout that could possibly reach that 75-point plateau, but the team around him doesn't exactly build confidence that he's going to do it this season.  I don't think the Sabres will have a 1st round worthy player this year, but they are going to move a lot closer to having that option, especially if they can start stringing wins together.

Of course, you should be holding Ryan O'Reilly in pretty high regard, as he is an integral cog that makes this machine work and quickly, he'll shuffle behind some of the future superstars on this team and that should be okay with him.  He'll make a pretty good impression again this year, helping the likes of Kyle Okposo, Sam Reinhart, Evander Kane and Tyler Ennis to come up to pool worthy numbers.

The Sabres appear to have a real gem in Rasmus Ristolainen, as his numbers have trended upward fairly quickly.  His current projection may be a bit low, but will certainlyy get a good long look before the season starts, as he will be a big part of the Finland contingent at the World Cup.  Zach Bogosian, Cody Franson and Dmitry Kulikov should also play big roles for the Sabres and they could all end up better than their projections, assuming that all these pieces come together at the same time.

The back-up goaltending situation may be far from set in Buffalo and it could be a good battle.  I am currently giving the edge to Anders Nilsson, who has bounced around a bit, upon his return to the NHL, but Linus Ullmark is waiting in the wings for his chance and training camp could be his time to shine.  Lehner will get most of the minutes, but he has yet to prove himself as a workhorse, so there will be minutes to pick-up this season for the back-up(s).

The Sabres are going to be one of those interesting gamble teams this year.  Either you believe that they can lift their season into the playoffs, then they would be a good bargain team in the late rounds, or they'll flop under the lack of experience and they won't be able to score in the late months of the season and bust.  This one will be a matter of perspective, but I might be leaning towards the playoffs here.

The Sabres still have to put some dollar figures next to some key players before the season starts, including their top defenseman Rasmus Ristolainen and a key roster forward in Zemgus Girgensons, both restricted free agents and looking for deals for the long-term.

The Sabres should have in the neighbourhood of $9 million to work with underneath the salary cap ceiling, but they would have to be committed to some long-term deals with their two key RFA's this year.  Girgensons may still warrant a bridge deal, while Ristolainen could be looking for Bogosian money to stay long-term with the team.

Forward Tyler Ennis couldn't finish the 2016 regular season with some concussion issues, missing the last 45 games of the season with the head trauma.  There hasn't been a lot of updates on his condition through the Summer, but if he has been cleared, he still has the potential to put some points on the board, but you may want to skip him in the draft, cleared or not, waiting to see what he could do in the season and pick him up in the mid-points of the season.
Posted by opiatedsherpa at 2:10 AM