The Florida Panthers are going to look a bit different in the 2017 season and that will mostly consist of their new-look logo and jerseys, trying to class up the organization a little bit.  That extra bit of maturity is certainly out there to match the maturation levels of some of their top young players and this could really come around for this team in a big way.

Jaromir Jagr and Roberto Luongo have certainly done a great job with some of the youth on this Panthers team, as they are around to help guide these future stars through the league.  Since they are all working and growing together, it only seems like a matter of time before they are reaching their peak and that could be coming sooner, rather than later.

I don't think we'll see where the ceiling is for most of these players quite yet, as they really haven't hit their stride as of yet.  I would imagine Aaron Ekblad will be the cog that really drives the wheel here and in year number three, this will be the time where he puts on a good push for his team.  The addition of Keith Yandle should also be a good guiding force on how to give that push and we could see a formidable side here.

This is shaping up to be a very good year to take from the Florida Panthers, but what kind of potential are they going to realize this season? 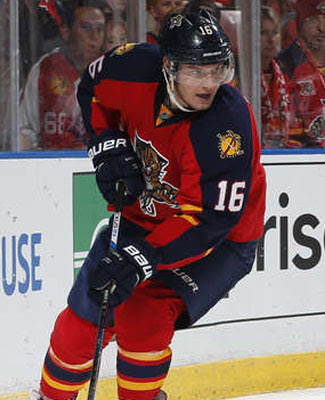 It's just about that time that we see Aleksander Barkov finally break out and have himself an excellent season.

The 20-year old will be 21 when the season finally starts and he will certainly build on his 2016 season, where he finished with 59 points in 66 games and now he's due to push the 70-point plateau, if not better.

The Panthers are rocking a solid core group of young players and the 2nd overall pick in the 2013 draft is right in the thick of it, finally starting to live up to all that potential he had coming in.  Don't be afraid to take an early flyer on this kid.

Barkov might not be a 1st rounder in the projections, but neither is Roberto Luongo, as the acquisition of James Reimer says to me that the Panthers will not push Luongo to big minutes, thus taking him out of 1st round projections.  They will come around eventually, I'm not sure I'm willing to take any of them this high right now.

Names like Jonathan Huberdeau, Vincent Trocheck, Jaromir Jagr, Jussi Jokinen or Reilly Smith are really going to appeal to us poolies this season and rightfully so.  They were all coming together nicely by the end of last season and since they are all sticking around together, I would imagine that it will work in their favour again.  Now, if they could get a kid like Nick Bjugstad to finally lift his game up, they would really be in business.

Ekblad and Yandle will be the ones doing a lot of the heavy offensive lifting, facilitating the power play units and executing the breakouts, while the remainder of the blueline corps are going to be there to stabilize the system, but still finding the odd point or two here and there.  Jason Demers and Alex Petrovic are the two likeliest candidates for those extra points, but they will be better late-round adds than chasing them down early.

Spoken about earlier, this will be the Luongo-Reimer show, as the new guy will help ease the burden on the veteran, likely hoping to eventually unseat the incumbent number one, maybe not this year, but some time soon down the road.  The split in ice-time will be an interesting topic all year, but both are expected to do well, when called upon.

With a lot of talent seemingly falling down into the mid-rounds, the Panthers may not have a lot left in the later rounds, when we're looking for those home run picks.  A late-round forward or a late-round defender may not emerge so easily through the depths of 29 other teams.

Unrestricted free agents Jiri Hudler and Willie Mitchell are still waiting for some good news in this off-season, but the Panthers have taken care of everything that they needed to in this off-season.  They haven't been shy on spending either, as their current projected roster still has about $3.7 million under the cap ceiling to spend, so they aren't a budget team anymore, nor will they be scared to fill that remaining space up, if a good deal were to come around.

Hip surgery in May for Roberto Luongo may delay the start of his season, as the veteran goalie may have suffered a bit of setback in this off-season.  There are not a lot of details on the matter, but there are reports out there that suggest that Luongo may not be ready to go until November 1st, opening the door up for newcomer James Reimer to get accustomed to his new surroundings.  Be sure to adjust your numbers accordingly, but wait for the official word, closer to camp.
Posted by opiatedsherpa at 1:25 AM