What is it about the Minnesota Wild that keeps them floating in a state of advanced mediocrity?  They have done well enough to pick a couple of superstars to build their team around in Zach Parise and Ryan Suter, they have hit the jackpot with their number one goalie in Devan Dubnyk, Mikko Koivu patiently waits for that breakthrough and they have been doing a great job producing NHL-calibre defensemen, year over year.

Maybe those two superstars were gambles that have yet to pay off for the Wild, I think you can start it there.  They did put a lot of eggs in those two baskets and have they received full value from it?  Perhaps not.  When you put that much money into two players, you do lessen the available cap space and cash flow for your depth, so one issue could have created another, by all accounts.

Back in May, the Wild started the process of change with the appointment of Bruce Boudreau as head coach and he will certainly bring a fresh take for this team and his responsibility will be to get those star players to play like star players.  The Wild then took the off-season to rid themselves of some underachievers, they added a championship pedigree in Eric Staal and they have nurtured their core group of players, trying to promote a team of solidarity between seasons.

It's extremely hard to say how Boudreau is going to affect those stars, positively or negatively, it's a subjective process that varies from individual player to coach.  We're going to take a stab at it, knowing full well that some players are still going to score, but they can only hope that this new coaching philosophy will help lead them to wins at the same time. 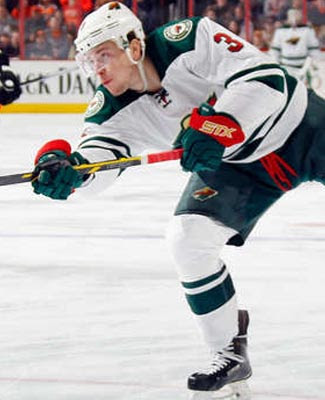 One player that could very well break out, but remains more intriguing than anything, forward Charlie Coyle did due for another production increase, continuing his trend of slowly creeping up the ladder.  45 points looks about right for the 24-year old, but there is certainly some more upside to his game, which could mean more points.

The Wild are now without a guy like Thomas Vanek, who ate up some key minutes here and there, but didn't produce and a guy like Coyle can certainly step into those minutes and possibly provide a great outlet for the newcomer, Eric Staal.

He's the kind of player you might be able to sneak out of a late round, as he is situated in a mid-draft sort of spot with his projection.

Another cusp player in the projection list, as Devan Dubnyk should eat a lot of minutes for the Minnesota Wild, but my projections don't have him in there, although the run on goalies early on in most drafts could see him move up.  Dubnyk will carry the load and if the chemistry on this team improves with their additions and subtractions, he could very well lift himself up there.

The Wild will certainly be present on draft day, throughout the day.  All of the forwards I have already spoken about will find some top half spots, while the Wild will also boast some reasonable depth this year, something that really hasn't been too much of a problem in recent years.  Mikael Granlund, Nino Niederreiter and Jason Pominville have been very respectable over the past few seasons, providing secondary scoring when the team has needed it most.  These are the good guys you want on your pool team.

Beyond Suter, the Wild's defense is coming into its own and a kid like Matt Dumba is now on the cusp of a breakthrough season.  A new bridge deal in hand, a reason to play a little bit harder, he could be a kid that finds his way to the scoresheet more this year.  Jared Spurgon and Marco Scandella could use a little bit more consistency in their game, but hopefully with the emergence of Dumba, the pressure on them reduces a little and they can play their game.

It didn't sound like the Minnesota Wild were all that confident with Darcy Kuemper for much of last season, so the acquisition of Alex Stalock was to help quell that goaltending concern and it could make for an interesting back-up battle, leading up to the regular season.  I'm not at all certain that Dubnyk's numbers are going to let this battle matter much, but it will be interesting to watch.

There truly could be some hidden gems in this Wild team and if you can find one of them late on in the draft, your pool team is already steps ahead off the hop.  A forward like Erik Haula could be a very good choice and one that some may just skip over, opting for some riskier rookies.

The list of unrestricted free agents coming out of the Wild system is staggering, which is a good indication of how much this team wants to change.  Their salary cap room, less than $200,000, gives you an indication about how much they have left to change and that isn't a great deal.

No, the Wild are not a budget team, they want to compete.  Now, have they spent their money in all the right places?

Injury played a large part in the Wild's finish in the 2016 season and their early exit in the playoffs as well.  There doesn't appear to be any lingering problems that will creep into training camp or into the World Cup proceedings, where they have six players participating.
Posted by opiatedsherpa at 1:15 AM