The Calgary Flames had a very good 2017, but the off-season was full of question marks, like "who would play in goal for the 2018 season?"  The off-season looked to be fairly productive, as they added a good veteran keeper in Mike Smith and really try to bulk up defensively with Travis Hamonic as well.  Expectations were certainly up in Calgary, but it just wasn't in the cards for them this year.

Health concerns were certainly there for the Flames, as Smith missed a fair bit of time down the stretch, the Jaromir Jagr experiment was a bust, key players didn't contribute nearly as much as they would have hoped and the blueline, which was their prized position, had too many big minute players and sharing those kind of minutes is really hard to do.

Overall, the Flames just couldn't keep the pace up that some teams were playing with.  Vegas joined the league and played like they were shot out of a cannon, Colorado finally lived up to some of their billing with their kids and then some teams just continued to roll, like your San Jose's and Anaheim's.  These teams were either trending upward or starting to level off, while the Flames now find themselves in a downward trend again. 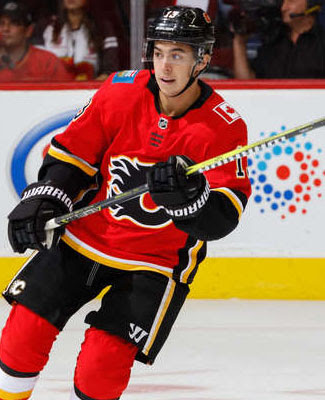 Johnny Gaudreau had another productive season, finishing over a point-per-game this season, scoring 24 goals and 84 points in 80 games for the Flames, but he wasn't quite the game breaker that he was a year previous and that may have been more about the linemates he had with him, than his overall play.  Gaudreau did have himself a 1st round pick kind of year, finishing 23rd in hockey pool scoring, but that wasn't nearly enough.

In total, there were only nine Flames on the pool worthy list and joining Gaudreau up front were Sean Monahan, Matthew Tkachuk, Mikael Backlund and Micheal Ferland, which goes to show you just how little scoring depth the Flames had up front.  The production from the defense was quite reasonable, as Dougie Hamilton, Mark Giordano and T.J. Brodie all had worthy seasons to be picked up, but lacked that extra bit of something in their own end.  Mike Smith only appeared in 55 games this season and posted 25 wins, which was good enough for 15th among all goalies, but when he was on the injured list, there wasn't much help for the team beyond him.

It's really hard to put a prediction down on the Flames, when you don't know who is going to be the number one goalie in town, but with a defense corps, which is now led by Dougie Hamilton, they would be best to try and get the harder working goaltender, rather than the flashier goaltender, especially since the three key defensemen aren't always known for clearing the front of the net too quickly. The Flames are not short on scoring, they'll just need to tighten up the back end a little bit. This is no easy task. The result of the 2018 season hinges mainly on the goalie they choose and right now, the Flames are on the tipping point of making the playoffs or not, probably more than any other West team today.

Well, the Flames didn't do too badly in the goalie department, but all of that scoring they had in 2017 really dried up.  They managed to take care of one problem, only to see a new one pop up.  So I guess this would be a bit of a miss, since they couldn't get to the playoffs after signing a decent goalie, but now what are they going to do?

And talk about another miss, Sam Bennett did not have a breakout season.  It wasn't even a pool worthy season.  The 21-year old managed to play in all 82 games, but he was only able to register 11 goals and 26 points, far from where I had him pegged at the start of the season.  How much more patience will the Flames have with him, before he needs a change of scenery or the Flames look to get a half decent return for him in a trade.


All of the pool worthy guys will be back for another spin in Calgary, or so we are to believe, but they are certainly going to expect more from their veteran players.  A guy like Michael Frolik will need to bounce back and get a better year offensively under his belt, while young players like Sam Bennett and Curtis Lazar need to be better as well.

The bright side to this summer's free agency period for the Flames is that they don't have any key free agents from the pool worthy list to contend with.  Prospect goalie Jon Gillies is up for a new deal as an RFA and he could be the backup next season, while Mark Jankowski, who had a strong finish to the 2018 season, also needs an RFA deal done.  These two could be pool worthy, as soon as next year, if they play their cards right.

I currently have the Flames' cap number at $68.5 million, which includes a couple of small buyouts still on the books.  With the cap ceiling moving closer to $80 million, that should give the Flames some ammunition for free agency this summer.

The Calgary Flames may need to put the focus on scoring in the 2019 season and that could be a blessing for Andrew Mangiapane, who led the farm team in scoring, despite playing only half the games.  The 22-year old did get 10 games with the Flames in the 2018 season, failing to register a point, but it was mostly bottom six time for him anyways.  If he can prove to the new coaching staff that he can put the puck in the net at the top level, he could be a guy to watch.

The Calgary Flames won't make a draft pick until the 4th round, unless the team's management can pull off a trade that could see them move into the first three rounds.  The deal that saw Travis Hamonic come from the Islanders, also saw their 1st and 2nd round picks head out east.  Sure, they may have only been picking 12th in the opening round, but this team didn't really get the results that they were hoping for, when the acquired the rugged defenseman and now it has cost them an early summer and no early picks to restock their cupboard.

The Flames have already made some changes, hiring Bill Peters, the coach of the Hurricanes in the 2018 season, and he should bring a different flavour to the ice.  The coach has some pieces to work with and he does have some quality in the back end, but it will be a matter of lighting a fire underneath some of his top players, in order to get results.  I can't imagine the management team for the Flames will last much longer, if these poor results continue to pile up, especially not with the pending decisions for a new stadium are hanging in the air, a winning product or at least the potential of a winning product would be ideal for those sort of negotiations.  Looking at what this team has to offer today, it could be another long season in 2019.
Posted by opiatedsherpa at 12:00 PM