Oh, the season that could have been for the New York Rangers.  The team added some defensive scoring depth in the off-season in Kevin Shattenkirk, it looked like this side was holding on to a good core group of veterans and there was a smattering of some youth from their system.

What the hell happened?

There is definitely a good argument for underachieving in the Big Apple, as the stars didn't come out to play, the injury bug bit pretty hard in a couple of spots and that veteran base just seemed to lose a bit of interest.

I think it should be looked at as some kind of positive that the team's management did identify with how poorly this team was coming along at an early stage, apologized publicly for it, released their plan going forward and now have a renewed life, trying to put this team back together and return to being a contender.  I'm not sure how long they've got to turn this thing around, but in issuing some public statements, they probably bought themselves some time with their fan base anyways.

Let the rebuild of the New York Rangers begin!  Well, not before going over last year's numbers first. 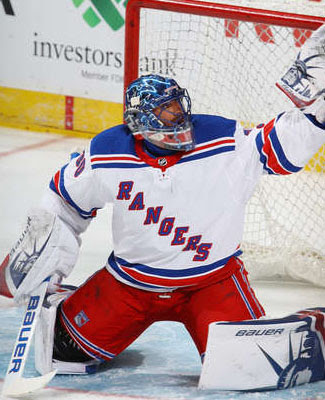 Now 36 years old, Henrik Lundqvist is still playing as steady as he ever was, but his numbers truly reflected how poor the team was in front of him this season.  Lundqvist still made 63 appearances in the 2018 season, but was only good enough for 26 wins and 57 points, only good enough for 102nd overall in pool scoring and 18th among all goalies.  How much longer can he keep up being this steady for a team that's this bad?

The Rangers finished the season with a stable of 11 pool worthy players, including Lundqvist, a couple of names acquired at the deadline and showed some promise.  Up front, Mats Zuccarello, Vladislav Namestnikov, Mika Zibanejad, Kevin Hayes, Pavel Buchnevich, Ryan Spooner, Chris Kreider and Jesper Fast all put up enough points to be selected.  That's a hefty list of forwards, but only Zuccarello finished among the top 100 at the position.  Brady Skjei finished the year as the Rangers top defenseman, Kevin Shattenkirk is in the conversation, but only played half the games.  Unsurprisingly, with the number of games that Lundqvist played, there were no other pool worthy goalies on the team.

If I were the Rangers, I would try tinkering just a little bit this summer, much like the Zibanejad/Brassard trade, just one move trying to find that extra jump that boosts them a little bit further in the playoffs... you know, to championship levels. If the Rangers opt to stay with the status quo, they will still be a pretty good team to pick from for us poolies, but I would expect much of the same as the past couple of years. I don't think the drop off will come this year, the one I was panicking about last year at this time, everyone on the roster proved that they weren't ready to quit, but no one proved they were ready to take it to another level.

Story of my hockey pool blogging and picking life... always one year too early or one year too late.  The New York Rangers absolutely quit on the 2018 season and it came early and the tear down was underway.  Tinkering didn't help, this team only provided depth to our hockey pool teams at best and now there isn't a next level right now.  The next level for some of these guys is whether or not they have a job.

Forward Jimmy Vesey was an intriguing player coming into the season and was expected to break out a little bit, if not a lot, in the 2018 season, but he only just hovered under the worthiness line.  Vesey finished with 17 goals, which isn't bad, but only 28 points, and that wasn't good enough.  This was a kid brought on to help push this team forward, but it just wasn't for him this year and it becomes questionable, as to whether or not it could be him.


It was a struggle to find a 21-man roster that looked half decent, even with the summer ahead of us all, but the Rangers don't seem to have a lot of options signed and on their roster for next season, but 'a lot of work' is an understatement at this point.  The Rangers will be a busy team in this off-season, I have no doubt about it.

Namestnikov, Spooner and Skjei highlight the restricted free agents that need attention this summer and I'm sure that they will get a lot of it.  These three are going to be high priorities for the Rangers, as all three showed some flashes in 2018 and are definitely a part of the solution.  Unrestricted free agency will see some bodies go, hard to believe many will stay, making the marketplace a little richer.

The 21-man roster above, plus a buyout on the books, currently leaves the Rangers with about $17.9 million in cap space against the 2018 cap ceiling, certainly will be more once the ceiling is raised.  The RFA group should get paid and it'll leave enough for management to be busy on July 1st.

There are a couple of 1st round picks blossoming in the Rangers system in Lias Andersson and Filip Chytil, both played well at the World Juniors for Sweden and the Czech Republic, both played pro hockey in 2018 and each saw their NHL debuts at the end of this season with the big club.  If the roster above is any indication right now, both players could very well see some considerable ice-time in good situations and could be in the conversation for top rookies in 2019.

The New York Rangers are in desperate need of some top end help on the blueline, even if these players drafted are a couple or few years away.  Just having them tucked away is good, looking towards the future.  London Knights defenseman Evan Bouchard seems to have a lot of the qualities that the Rangers once had in Ryan McDonagh, which seems to me to be something that the Rangers could always use.  Leadership, reads the play well and is a very good skater.  Bouchard is looked upon highly by many of the scouting outlets and the Rangers could really steal one here.

Call it the end of the season playing with nothing to lose, but the Rangers and their assets that they picked up at the trade deadline didn't look too bad.  Yes, teams may have looked poorly upon them and took them for granted, but they did acquire some real talent from Boston and Tampa Bay and this rebuild that they are going into doesn't look as dire as some others around the league.  I would wonder if that small sample size would be enough for Rangers management to do an about-face and go free agent shopping again, like they normally do, or if they are indeed going to be patient and start growing their own talent.  I'm sure the marketplace would like a quick turnaround, back to winning, but building a franchise from the ground up does have some staying power at the cost of lots of patience.  Either way, I don't see the Rangers improving greatly in 2019, the free agent class isn't that great and the youth movement needs more time.
Posted by opiatedsherpa at 12:00 PM