In the salary cap era, putting a lot of eggs in a few core baskets is a strategy that rides a fine line between success and absolute failure.  The latter really comes to mind for the Chicago Blackhawks in the 2018 season.

There's very little arguing that the Blackhawks have some of the best core players in the NHL today, but when you have $45.4 million tied up in six players on your active cap roster, you better be damn sure that the remaining $30 million is used well among the other 17 players that you can have on your roster.

Injuries did play a big part in the downfall of the Blackhawks, as the loss of goaltender Corey Crawford in the first half of the season was something that this team couldn't recover from.  Sure, they saw a little bit of cap relief from it, but they would trade that cap hit for some reliability in their net, any day of the week.

In years previous, the Blackhawks would introduce a new signing (or two) in the summer, we'd all look in wonder of what they're going to bring to the side and be surprised when they actually turn out to be a stud.  Sadly, that didn't happen for the Blackhawks for the 2018 season and their core, shaken up badly, couldn't perform to the levels we were used to seeing, hence the 25th place finish in the league. 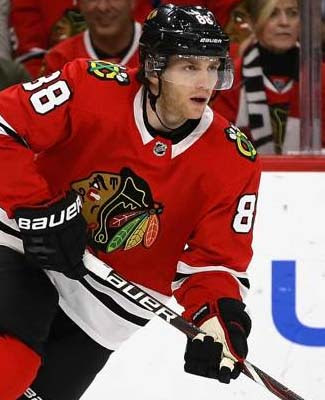 The Blackhawks were again led by Patrick Kane, who had a down year, by his standards, thanks, in part, to the team trading away his best trigger man in the off-season, Artemi Panarin, to the Blue Jackets (and look where that got them!).  Kane finished off the season with 27 goals and 76 points, playing in all 82 games, but that was only good enough for 35th in overall scoring, not even qualifying him to be a 1st round pick in a draft redo.

Rookie forward Alex DeBrincat emerged as a good little goal scorer, finishing with 28 goals and leading the rest of the pool worthy forwards, which include Nick Schmaltz, Jonathan Toews and Brandon Saad.  Duncan Keith, Brent Seabrook and newcomer Jan Rutta were all pool worthy from the blueline in 2018, offering reasonable depth back there.  And despite only playing half the season, Corey Crawford remained worthy at 35th among all goalies with 36 points, while his replacement Anton Forsberg was 50th among all goalies with 21 points.

I don't see the trend lines for Chicago's regular season numbers falling off the edge of the world after a division title in 2017, but there is a lot that needs to happen before we can talk about trending back upwards in the playoffs. The sweeping loss to the Predators this past season was a sign that things are not moving in the right direction for the Blackhawks and management will have to start getting real creative with what they already have. It seems improbable that the Blackhawks will trade one of those big contracted core players, unless someone else felt that the player was the difference between winning and losing, because those contracts are daunting. Unless something drastic changes in Chicago's roster make-up, I believe they are doomed for another early playoff exit in the 2018 season.

Well, the "trend lines" were loosely based on the performance, year over year, by the team's management, which has kept this team fairly steady before this season and they'll get at least another season to try and make the 2018 season into a blip.  The Blackhawks did make that one big move, but it traded money for money and that really didn't work out in the favour, mostly to the tune of not making the playoffs at all and indeed, falling off the edge of the world.  I was close, but not really, at the same time.

Well, Nick Schmaltz was only slightly overshadowed by Alex DeBrincat, due to their goal scoring records, but the two did finish tied for points by the end of the season at 52.  Schmaltz maybe didn't break out as much as one would have hoped, but that isn't to say that he wasn't a very serviceable player in the 2018 season and we'll certainly be looking at him in a reasonable spot in next year's draft too.


What a change that this lineup could be, if they got Corey Crawford back to 100% and Marian Hossa could be cleared to play from his skin condition.  Immediately, that would be two huge additions that this team didn't have on their roster at the end of the year and could make them that much better.  Both players are still big wild cards though, as Crawford's vertigo issues didn't clear up in the last four months of the season and Hossa's condition reportedly hasn't changed much either.  That roster above doesn't look too bad, but I think we all get the feeling that this won't be it, come October.

The 23-man roster above is currently coming in a shade over $72 million, leaving less than $3 million against last year's cap ceiling and that's before we know about the status of Crawford and Hossa moving forward.  The cap number is supposed to improve drastically, but it will be questionable as to whether or not that makes a big difference for Chicago.

A name to watch as one of those potential young players to possibly make a splash for Chicago is Swedish centre Victor Ejdsell, who finished the season in Sweden and then made the trek over to the AHL to finish his 2018 campaign.  Ejdsell had a good year for numbers in Sweden, made his NHL debut (1 assist in six games) and is having a good AHL playoff with the Rockford IceHogs.  I'm probably going to highlight him as a late option for next year.

The Chicago Blackhawks could very well do with just about anything, a top forward or a top prospect defenseman.  With their lack of scoring in 2018, I would have to lean towards getting themselves a top forward to help out the depth would be key, which has me looking towards Oliver Wahlstrom.  Wahlstrom put up huge numbers with the US Development Program in 2018 and is already committed to going to Harvard for the 2019 season, where he can grow and develop.  This kid is touted as a natural goal scorer, something that the Blackhawks have been accustomed to having in their lineup over the years.

The Blackhawks, this early in the off-season, are a bit of a wild card for next year.  They certainly have the core group of players in place for the 2019 season, but when the cap ceiling finally moves, all bets are off, as to who stays, who goes and how they could possibly improve their depth.  If Corey Crawford can't come back, how will the Blackhawks fill that void?  Is Marian Hossa going to be able to play again?  These are questions that we can't answer just yet, but looking at the team that they have in place, there's certainly a chance that Chicago could return to the playoffs, all things being equal.  I am extremely curious to see what they do in this off-season, as those corresponding moves might give us a clearer picture about how they're moving forward with their key injured players.
Posted by opiatedsherpa at 12:00 PM