Is it too dramatic to say that the 2018 season for the Montreal Canadiens was nothing short of a disaster?  Significant losses to the roster, due to injury, was the leading cause of this dismal year, something that the rest of the veteran core could not salvage at any point this year.  Carey Price getting hurt again, Shea Weber's battle with a tendon issue in his foot and then more injuries struggles near the end of the season that caused them to limp to the finish.

It's not unfair to think that expectations were pretty high at the start of the season, since no one was hurt yet and management was assuring their rabid fan base that they had the right pieces in place, they made all the right moves and they were going to compete in the Atlantic Division, if not beyond, in the 2018 season.  Of course, you can't blame management for the injury situation, but you may have been able to keep a few of the wolves from your door, if they handled the Weber situation much differently, like being transparent about the issues, instead of dangling the possibility of a return for the longest time.

Still, with all of that being said, you cannot deny that the Canadiens were terrible this past season, their 28th place finish in the league is living proof of that fact.  The team's depth was challenged and defeated and now looking forward, there are certainly many more questions than answers. 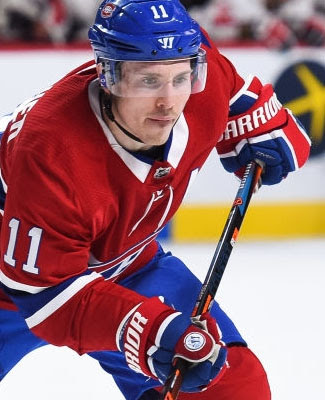 I like Brendan Gallagher, so don't get me wrong, when I say that this isn't the guy that should be leading your team in hockey pool scoring.  Gallagher had the benefit of playing in all 82 games, scoring 31 goals and 54 assists, good enough for 114th in overall scoring and 83rd among all forwards.  Those are some decent numbers, especially in the goal scoring department, but the only way the Canadiens are going to be getting anywhere is if they have one of their key young centres or their number one goalie in this spot and keeping Gallagher at the 30-goal level.  The Canadiens should hope that he can continue on this pace, because the team is certainly better for it.

Now, when I tell you that the Canadiens only had seven pool worthy players on their roster to finish the year, it seems far more believable that Gallagher was on top.  Alex Galchenyuk, Jonathan Drouin, Max Pacioretty and Paul Byron joined Gallagher as the only pool worthy forwards last season, while Jeff Petry was the only pool worthy defenseman and Carey Price managed to do enough to rank 38th among all goalies in points, which seems kind of surprising, given his injury-plagued year.

The Canadiens still have the tools to be a very good regular season team, despite how much work they have to do this summer and I have no doubts that they will be able to accomplish the signings of those key players to boost their chances at a division title repeat. Nevertheless, there just doesn't seem to be enough on paper for me to think that they're going to make waves in the playoffs. I wouldn't say impossible, but still rather improbable. If Sergachev can come in and be that impact player in the 2018 season, it would give them another big body on the blueline and it could make them harder to play against, but that's a lot to put on a rookie. They are an impact player short and if they can find it, we can discuss, at length, how much further they'll go.

At this same point last year, I would have said that a lot of things would have had to have gone wrong in the 2018 season to fall below the playoff window, let alone go down to 28th overall in the league.  A lot did go wrong, including the trade of Mikhail Sergachev to Tampa Bay for Jonathan Drouin, who is now the focus of the next section.  Their impact players that they had on the roster got hurt, their acquisitions weren't enough and here we are, ruing the 2018 season that was.

In the off-season, the deal that brought Drouin into the fold was very well scrutinized and for good reason.  Sure, you have to give up a very good player/prospect/pick to get one in return and the Habs management rolled the dice and played on Drouin.  Instead of bringing a player that brought an immediate impact or breakout season, they brought in more questions about where some of these young players should play and I have little doubt that this had an effect on guys like Drouin or Galchenyuk.  Drouin was pool worthy, but I know we were all expecting more than 46 points in 77 games.


Assuming that Price and Weber are at (or close to) 100% at the start of the 2019 season, the team may regain some of its lost confidence and it might pick up to where the expectations were last season, but those are some mighty maybes to overcome.  I think it is far more likely that this team is going to make some changes, before we can make any real assertions.  I think there will be much more hesitation from all those non-Montreal fans at the draft, unless their summer goes swimmingly and the preseason is incredible.

Free agency didn't snag any of the pool worthy players from their short list, but you could certainly make an argument that Phillip Danault is a key free agent to lock up, thankfully on the restricted side.

The 23-man roster that I had sketched together above does leave the team lots of room to play with this summer.  I have this roster leaving $11.2 million in cap space to last season's ceiling, which is bound to go up and leave more space to use.  Now, this team has to encourage those few gems on the free agent market to come play for them.

On the blueline, the Canadiens could really use a guy like Noah Juulsen to help steady everything and it sounds like he will get every opportunity to make the team in 2019 and since he only played in 23 games in 2018, he'll still carry some rookie status for those looking to add to their possible rookie mini-game roster, late on at the draft.  Juulsen has been said to be a good two-way defender that makes a good first pass and with the transition game that the Habs would love to make work, that could be the kind of guy that can rack up some assists.

The Montreal Canadiens also got a boost at Saturday's NHL Draft Lottery, moving up from 4th to 3rd with a lottery win and they just improve their picking ability within the top four players.  Of the two remaining forwards on the list, from the top four, both are big bodied skill players, but one seems to have a little more sandpaper than the other, which is why I think Brady Tkachuk finds his way to Montreal.  Other than Gallagher, the Canadiens are a little too mild-mannered and against the Boston's and Toronto's in their division, they need a better compete level.  Tkachuk brings it for them, in my opinion.

Montreal should be and will be better in 2019... talk about a low expectation bar to set, but it's true.  How much better depends on their two highest paid players in Price and Weber and their respective health.  If these guys are 100% heading into camp and into the regular season, Montreal will be set to compete.  Moving some pieces around in the summer may be in their best interest, since the years of failure in recent memory might weigh heavily on some of the longer tenured players on the roster and bringing in some fresh faces could be what this team needs to take a new approach to the year.  They're not that bad, they get to add a premier forward at the draft and there is still some talent waiting in the wings, so it's hard to think that they won't be better than 28th overall in 2019.
Posted by opiatedsherpa at 12:00 PM