What a spectacular turnaround for the Colorado Avalanche and it was nothing short of being "about time!"

The top end players that have been playing on this team for a little while, either stepped up to their potential or came fairly close and you could see what kind of difference it made.  Going from last place in the standings, by a country mile, to making the playoffs, if only just barely, was a great turnaround for this franchise and things are again, starting to look up.

The Avalanche were able to bring in some fresh legs to their roster, they added a number two goalie that came up huge when their number one went down for an extended stretch during the year and they found some production out of their depth, which certainly helped.

The Avalanche did have some minor injury issues through the year, Semyon Varlamov was out for a stretch, as was Tyson Barrie, so you could put the argument out there that their season could have been better than the second wild card in the Western Conference, but I'm sure they can hang their hats on it this summer and start looking forward to building on their successes. 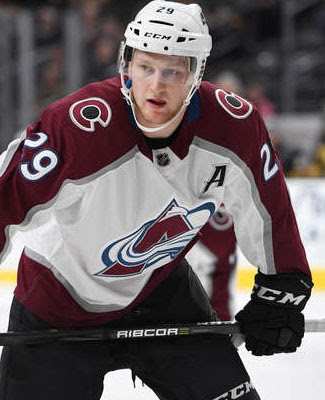 If the Colorado Avalanche were going to get anywhere, they needed Nathan MacKinnon to really hit his stride and he did exactly that in the 2018 season.  MacKinnon got the votes to become a Hart Trophy finalist after leading the Avalanche to the playoffs, thanks to 39 goals and 97 points in only 74 games played, scoring at 1.3 points per game.  His point total was 8th best in the hockey pool, 5th among all forwards and now his stock is quite high, the Avalanche can really trust him to carry this team forward.

MacKinnon did get quite a bit of help, as there were 11 more players who were deemed pool worthy through their numbers, including his right-hand man, Mikko Rantanen, who finished 22nd overall in pool scoring, sneaking into 1st round consideration in a draft redo.  That's incredible!  Also worthy up front were Gabriel Landeskog, rookie Alexander Kerfoot, Carl Soderberg and Blake Comeau, while on defense, it was Tyson Barrie, Erik Johnson, rookie Samuel Girard and Nikita Zadorov.  The goaltending duo of Semyon Varlamov and Jonathan Bernier split the duties and both posted good numbers, both in the top 30, which kept a consistent presence in the crease and helped snag a lot of those wins.

I don't think it's unfair to say that the Avalanche are only a piece or two away from finally taking all that talent and breaking out. There's also a certain possibility that they already have that piece in Tyson Barrie, as they have been waiting for him to realize his potential. Whether or not he still needs a touch more help somewhere and somehow, that's up for debate as well. Between MacKinnon, Duchene, Landeskog and even looking at what Jost can be, they should have the tools to work this out and/or trade one of them away to get that extra piece that they need. The Avalanche are going to be an interesting team to watch in the off-season and it will be those potential pieces that determines where they end up at this time next year.

The acquisitions that the Avalanche made, Bernier and Kerfoot, both UFA signings, came up huge in the regular season and then a trade that saw Matt Duchene leave town to Ottawa was also quite profitable, receiving Girard in that deal and watching him flourish at the back end.  The Avs were busy and it certainly helped, as they reached some of their potential and still have more to live up to.

2016 1st round pick Tyson Jost didn't quite feature into the team, like I thought he might in the 2018 season.  A knee/lower-body injury got him off to a slow start, a stint in the AHL for rehab only got his skating legs back, but he couldn't quite find the sharp offensive play in his game through the year, which was kind of disappointing.  Jost played in 65 games, scored 12 goals and 22 points, showing that he's coming along, but thankfully, it's a matter of when and not if.


An exceptional portion of the pool worthy players are already signed on and ready to go for the 2019 season, which has to be very promising for this Avalanche team.  Rantanen has one more year on his entry-level deal, which will keep costs down and there are only a few holes to fill, which should make this summer fairly straight-forward for Joe Sakic and company.  I've got to think that this will be a team to pick from at the draft, unless they come crashing back down again... but we won't know that until this time next year.

The 23-man roster that you see above is currently under the salary cap floor, so if anything, there will be some signings to make up for that.  And that's last year's floor, by the way, a target that will be moving up.  I am showing them $2.8 million from the floor right now, which should increase by $3 to $5 million in a few weeks, so a couple of key signings should get them safe.  It's not a real worry.

Only two players from their pool worthy roster is heading to free agency, goalie Jonathan Bernier and forward Blake Comeau, both probably looking for decent raises in this off-season, but Bernier may jump ship for more minutes, although Varlamov's wonky health situation, on a day-to-day basis, could be enough to convince him to stay.

Matt Nieto, Nail Yakupov and Patrik Nemeth all found decent homes in Denver and could be considerations for small raises in restricted free agency as well.

There is quite a bit of optimism with forward Vladislav Kamenev, also acquired in the Duchene deal between Ottawa and Nashville, as he is a decent offensive production guy with decent size.  It doesn't sound like he brings a ton to the game, but he does get the job done at the AHL level.  With a couple of their other key young players still maturing at various different levels, Kamenev would be my pick as the guy to look out for in Colorado.  He was a 2nd round pick in 2014, so that has to say something, right?

The Avalanche have been stocking their coffers quite well in recent years, they have a couple of great defensemen on the rise, so it could be a good time to go out and snag a top forward with the 16th pick. The Avalanche have a good stable of forwards that have both size and skill and I would go in the direction of Serron Noel, the Oshawa Generals forward, who brings exactly that to the table.  The 6'5" 17-year old already has the height to put a big body together and his numbers in the OHL were very good as well, 53 points in 62 regular season games.

For me, the Colorado Avalanche could go in either direction, both up or down.  The Western Conference has been so finnicky in the last few years, that teams that hover on the bubble can either see that bubble burst or see a team buckle down and move up and off that bubble.  The Avalanche are a bit of a bubble team still, but if players like MacKinnon, Rantanen and Barrie can get the rest of their teammates to pick up their socks, this team could move up among the elite.  Solidifying that number two goalie behind the injury-prone Varlamov will also be key, as that number two guy normally sees a lot of starts.  If MacKinnon is locked in at 95-to-100 points, the Avalanche goalies are good, this Avalanche team can come back and challenge for a better playoff spot in 2019.
Posted by opiatedsherpa at 12:00 PM