The Minnesota Wild were a strong team in an exceptionally strong division and it was going to be their all-around game that was hopefully going to take them places this season.  Their goaltending was strong, their blueline had been blossoming at the right time and up front, they had a good mix of experience and zest that was going to make any series interesting.

Unfortunately, that strong division that they were in made it difficult to put themselves in an advantageous spot for the playoffs and they ran into a high-flying Jets team in the opening round and they didn't have much of an answer for their speed and skill, losing in five games.

It's disappointing to any team, when they don't make it very far in the playoffs, but there are some positives that can be drawn from this 2018 season for the Wild, as they are building up a stable of some great young talent, which should keep them competitive for quite a while, they should be able to consider themselves one or two pieces away from really contending with Nashville and Winnipeg and they play a good brand of hockey that will keep the fans coming back for more.

And you know... some of these players are pretty good for your hockey pool team too! 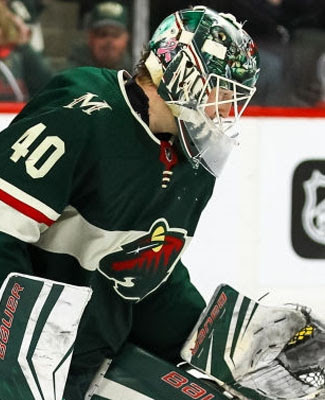 It was another solid season for Devan Dubnyk in his green jersey, finishing 6th among all goalies in hockey pool scoring in 2018.  The 32-year old appeared in 60 games for the Wild, registering 35 wins and 83 points in the season, also good enough to be 25th overall, the last pick of the 1st round in a draft redo.  That's a strong player, now coming through his best years as a goalie, so keep tabs on him.

In total, the Wild had 12 players in the pool conversation, six forwards, four defensemen and both goalies, including Dubnyk.  Eric Staal, Mikael Granlund, Jason Zucker, Mikko Koivu, Charlie Coyle and Nino Niederreiter all led the way up front, sprinkled well through the top 200 forwards.  Ryan Suter, Matt Dumba, Jared Spurgeon and Jonas Brodin made for a very solid blueline, it was a real shame when Suter suffered that late season injury and couldn't play in the playoffs, probably one of the biggest reasons for the team's quick exit.  Finally, Alex Stalock was a very serviceable backup this year for the Wild, didn't play a whole lot, but did what needed to be done, when called upon.

The Minnesota Wild have a lot of potential for good things in the 2018 season. They could quietly have a very productive summer, through the expansion draft, maybe trying to wiggle out another top pick at the entry draft, as they don't have a pick until the 3rd round right now, and right through free agency. The Wild don't have to do a lot, but they will likely be shopping around for that extra little bit that puts them over, but as it stands right now, they still have the ability to be a top three team in the Central Division, arguably, they have enough for a run at the division title. I like where the Wild are, what they've done so far has been impressive and there is more to come, I'm sure.

Well, a top three finish in the Central Division was what they got and for a little while there, they were in the running for a division title.  They didn't tinker too much, they were hoping that they could build from within and to some degree, it may have worked a bit.  There's still more to come from this Wild team, I'm sure and they'll be fun to watch.

I think it is fair to say that it was a disappointing rookie season for Joel Eriksson Ek, who came in with a lot of promise to be an offensive standout for this team.  That's not to say that it won't happen, but 6 goals and 16 points in 75 games, a couple trips to the minors, doesn't really add up to a great year.  Do keep an eye out for him though, he's about to break loose.


The Minnesota Wild have a good portion of their pool worthy players all locked in for next season, but there is still some work to be done.  If they can get the likes of Eriksson Ek or Jordan Greenway going at a good clip offensively, they will again be a strong team.  Depth on the blueline looks a bit shady right now, but it can come around.  The Wild will certainly have options for your pool team at various times.

Jason Zucker and Matt Dumba are the two big restricted free agents that the Wild will have to look after this summer and that could mean a fair bit of work to be done to slide them into their roster.  I slotted together a rag-tag group of 23 players above, just to fill it in and that only left the Wild with $6.8 million in cap space, with some extra help coming with the ceiling being raised for next season.  It's not going to be a lot of money, but the Wild will have to spend wisely, since that blueline is looking thin.

Now that Jordan Greenway is out of college and signed his entry-level deal, he's the one to watch for the Minnesota Wild next season, as his size and strength, not to mention his overall skill set, should have him in pretty good shape to get a lot of minutes next season.  The Wild are already pretty set in their top six, but if they can put together three solid scoring lines, they will be looking to really compete with those top teams in their division next season and it could be quite the race.  I'd earmark Greenway as a late round sleeper pick, if you're looking to jump in that rookie pool race.

I can see the Minnesota Wild jumping on the blueline train at the draft this year and one name that sticks out as a guy that could certainly help is Soo Greyhounds defender Rasmus Sandin, another one of those offensive Swedish defensemen.  A great first pass, some excellent vision and a decent skater, he's got some tools that could really help the Wild break out of their own zone quickly and get the puck to those swift skaters up front.  The Wild need depth back there, so here's some more depth.

We haven't seen the Predators or the Jets yet in this set of posts, but it should be fair to assume that they're going to be very good again next season, making the job of the Wild to keep up with them, more than anything else.  They have a goalie in his prime, once Dumba is signed, they'll have a great blueline core group and their forwards are being infused with some unique talent from across the board, which will keep their opposition on their toes.  I think it's an exciting time for the Wild and they'll continue to run with the big dogs, even if they still finish 3rd in the division, it'll be nice and close.  I wouldn't hesitate to keep a close eye on their young players for next season either, there could be some good pool assets there too.
Posted by opiatedsherpa at 12:00 PM