Expectations for the Vancouver Canucks for the 2018 season were considerably low, heading in.  The term 'rebuild' had been keeping the team afloat through the summer and it was pretty hard to get too high on them.  Sure, they had a number of pieces a hockey pool guy could get excited about, but the overall schematic of the team didn't appear to be ready to win.

Maybe it was some low expectations, between both their opponents and the rest of the hockey world, that let the Canucks get off to good start to the season, when they were completely healthy.  All the hands that they had on deck made them into a fairly competitive team, but then the injuries really started to mount up and the team's depth at the top level was definitely a challenge and their early season successes fell much closer to their end-of-season expectation level.

For many, it was a good glimmer of hope for this franchise and things don't seem nearly as bad going forward, assuming that all the pieces can come in and fit at the same time, the youth movement makes some solid strides and management keeps the building process going in the right away.  Yeah, the 2018 season was a bit of a stinker, but it could be quickly forgotten about, if some of this promise comes to fruition. 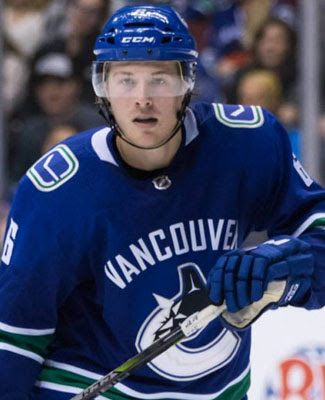 One of those insanely bright spots to the Canucks' season was rookie forward Brock Boeser, up until his injury, of course.  Boeser's season was cut short to only 62 games, but he was able to score 29 goals and 55 points, making him the Canucks top pool player in the 2018 season and that goes to show you the depth and the injury luck that the team had.  Boeser's efforts were not unrecognized, as he was named one of the three finalists for the Calder Trophy and there are a lot of people wondering how good his numbers could have been before that nasty back injury.

In total, the Canucks only had eight players worthy of being included in this year's hockey pool, as Daniel Sedin, Henrik Sedin and Bo Horvat joined Boeser among the worthy forwards, Alex Edler, Michael Del Zotto and Derrick Pouliot were all worthy from the blueline and Jacob Markstrom played and won enough games to be ranked 20th among all keepers in hockey pool scoring, which isn't too bad either.  By this time next year, that list is going to have changed drastically and I believe we all know why, but that's for later on.

The term rebuilding is an anchor that is going to hold this team down for a little while, but the youth movement is showing some early promise, that it might not be as long as other franchises. Nevertheless, the diminishing numbers from the Sedin twins and inconsistency on the blueline are the major hurdles that this team has to overcome, somewhere and somehow, in this off-season, before they can be considered a playoff team again. A blockbuster deal or a small miracle could turn this one around, but with some of the team's best prospects in need of the maturation process, I think it is going to be another long year in 2018, but we'll certainly see flashes of what they could be.

I would be the first to say that the Canucks' narrative in the 2018 season was very narrow and quite easy to have predicted last year.  I don't think anyone saw just how competitive they were in the first portion of the season coming, but there was hope throughout the year.  Management wasn't going out to make any big, flashy deals, just patiently awaiting their picks and prospects and I think that course seems very likely to remain going forward.

Brock Boeser?  Yeah, he did pretty well.  I'd say he broke out in a big way.  Now, what does he have to follow up that season with?


The (very) early mock-up of the Canucks lineup is not one you can really take too seriously, there's a lot of work to be done, but the immediate changes of the lack of Sedin twins is quite noticeable.  Since the twins have played their last games in a Canucks uniform, the team now has to look forward to their youth to help them get through, what could be, a tough time offensively.  The twins were decent in 2018, pool worthy even, so taking those two leaves major holes to fill.  I don't think the Canucks may be too popular at the draft in September/October, beyond some of the key names.

Defenseman Derrick Pouliot is the only one of the active pool worthy players heading to free agency for the Canucks and it's only restricted free agency, where he could get a pretty good deal to slide in with some of those other heavier defenseman deals the team has on the books.  Sven Baertschi, Markus Granlund, Jake Virtanen and Troy Stecher are all among the underachievers that need new deals this summer too.

Cap-wise, the twins leaving a huge gap of about $14 million in annual space open and with Derek Dorsett on the books for another year, that gives them extra LTIR space, if they need it too.  The 23-man roster above, comes in just over last year's floor and that's before using Dorsett's credit.

The team's top prospect is definitely one to watch, 2017 1st round pick Elias Pettersson.  He absolutely lit up the Swedish Elite League, scoring highlight reel goals, leading his team to a league championship and earning playoff MVP honours as well.  This kid already looks like the real deal and the Canucks dropped a lot of jaws, when they picked him as early as they did at last year's draft and it is already making them look like geniuses.

The Canucks have done well with drafting forwards in recent years and the jury is still out on how well Olli Juolevi is going to pan out, but there's still hope.  This year might be a good year hedge those bets on the blueline and go for another young defender, Noah Dobson, with the 7th overall pick this year.  Decent size, above average offensively, but could use a little work on his overall speed, a little bit of patience could go a long ways for a kid like this in the long run.

With the Sedin twins now departed, the Canucks depth will be challenged even more in the 2019 season.  They will have to replace two 50+ point players, find a way to keep their key players healthy and hope that some of their kids can climb up the depth charts a little faster than initially expected, in order to stay relatively competitive.  The Canucks did show flashes of what they could be moving forward, but it all goes back to depth and what they didn't have when Horvat and/or Boeser got hurt.  A solid summer, some promising young kids and a strong camp might make this a better team, but the playoffs do still seem like a little ways away.
Posted by opiatedsherpa at 12:00 PM