The last of the non-playoff teams on the list is the Florida Panthers and they only missed out on the tie-breaking procedure, because the New Jersey Devils had one more overtime win than they did.  That's just how close everything was in the Eastern Conference... that damned extra point in the standings!

After a fairly significant flop in the 2017 season, the Florida Panthers' expectation levels fell back to Earth a little bit more heading into the 2018 season, which probably did them some good.  They weren't quite under the same microscope, especially at the hockey pool level, but we all had a feeling that they were going to compete.

The Panthers were one of several teams that were probably fairly disappointed that their plan at the expansion draft backfired on them, since Jonathan Marchessault was such a stud for the Golden Knights in the 2018 season and the Panthers probably thought that he was a flash in the pan kind of player.  The Panthers with another 27-goal scorer in their lineup, could have got them into the playoffs.

Are the Panthers really coming around the bend to being a competitive force in the Eastern Conference?  Slowly, perhaps.  Being on the cusp of making the playoffs will certainly raise the expectation level for them in the 2019 season, assuming management makes all the right moves in this coming summer. 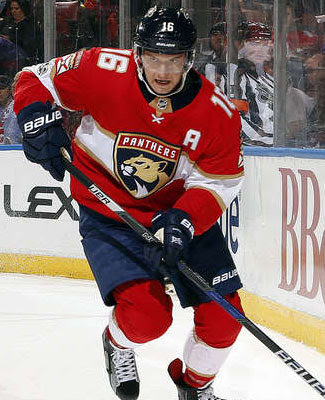 The Panthers are finally getting to see Aleksander Barkov really blossom in these last couple of seasons and his game was as colourful, as it was productive.  The 2nd overall pick in 2013 broke out to score 27 goals and 78 points in 79 games this season, nearly a point-per-game pace, ranking him 32nd overall in pool scoring, 25th among all forwards, which would make him a solid 2nd round pick in a draft redo.  The Panthers were able to find him some quality linemates, lining up with Evgenii Dadonov for the better part of the season, a very pool worthy addition, despite his injury.  This pairing has some real potential to it, which is good news for Panthers fans.

Besides Barkov and Dadonov, the Panthers had eight more pool worthy players on their list, Vincent Trocheck, Jonathan Huberdeau and Nick Bjugstad up front, Keith Yandle, Aaron Ekblad and Michael Matheson on the blueline and their goaltending tandem of James Reimer and Roberto Luongo were both worthy as well.  One thing that has been fairly noticeable through these outlook posts, the non-playoff teams have had a lot of depth issues up front and it appears that the Panthers were no different.

There was a lot more working against the Panthers in the 2017 season, making the argument that they were not necessarily a bad team, they were just forced through some unfortunate circumstances in the year and it cost them their playoff spot. Even if Jagr was to depart to a better chance at winning a Cup in this off-season, he may have had more than enough time to impart some of his leadership and experience to the key guys in Florida, which makes me believe that they'll be back in the playoff fight at this time next year. The cornerstones are there, but goaltending could still be a question mark. As long as the team plays well in front of the keeper, they should be in more games in 2018 and they will find their way back to the playoffs, barring a disaster.

This was pretty close.  The Panthers do have a lot of good pieces in play and they were damn close to the playoffs and they may have only seen some minor disasters that you could argue a good point that they cost them the playoffs.  The addition of Dadonov was clutch in the summer, although he was injured for eight games, during a hot streak, and Reimer played exceptionally well, when Luongo was down for an extended period of time.

The 2018 season was actually quite good for Jonathan Huberdeau, who ranked 3rd on the team in pool scoring with 69 points in 82 games and there's certainly some wiggle room for a little bit more production in the 2019 season as well.  He outpaced my projection of 65 points, if only marginally, and certainly impressed.  I think he could be a sneaky pick in next year's draft, if you can get him low enough.  He ranked 47th overall in pool scoring, a late 2nd round pick, but being in Florida, you might be able to get him late in the 3rd or early in the 4th.


All 10 players that were on the pool worthy list are confirmed and ready to go for the 2019 season, which makes things really easy for us poolies to visualize.  Luongo has confirmed that he will return for another year, but we will question his capacity for winning, as he is 39 years old and will be at the start of the season.  The Panthers appear to be paying the right guys, so there is some real promise in there somewhere.

Forward Jared McCann and defenseman Alex Petrovic are the two most notable free agents, heading into the off-season and both are of the restricted variety.  Otherwise, the Panthers don't have a lot of concerns under their own roof, in the free agent department.

Cap-wise, I have their current cap commitments, including the 21-man roster above, plus retained salary and a buyout, coming in at $67.7 million, leaving them $7.3 million in cap space, before the lift of the ceiling.  This could be good tinkering money for management this summer, it won't buy them a huge piece, but they could possibly find one or two pieces to compliment what they have.

Last year's ones to watch were a couple of duds, I should say.  The Panthers did finally bring up 2016 1st round pick Henrik Borgstrom after his NCAA season was finished, signed him to his entry-level deal and played four games, scoring a goal.  The kid has a good frame, all kinds of offensive upside, but needs to just put on the strength.  This shouldn't be a problem for a 20-year old and I think this kid is probably going to have his name thrown in the ring for the rookie race, before it's all said and done.

Last year, the Panthers had the 10th pick overall and they opted for Owen Tippett, getting some decent size out of that pick.  This year, I can see them move towards the best player available, or that sort of idea, at least.  The hockey IQ, size and work ethic were some of the things that set Jesperi Kotkaniemi apart from some of the other prospects, according to one scouting outlet and I know Panthers management is all about that sort of stuff.  With the 15th pick, the Panthers could make a good add here, adding a kid like that to their lineup, one or two years down the road.

The combination of Barkov, Trocheck, Huberdeau and Ekblad gives the Panthers a really solid core, especially with them all being under the age of 25 right now.  This team has made some good additions in recent years and they could do with one or two more in this off-season, maybe the emergence of Borgstrom will be one of those, maybe a free agent on the back end as well.  This team is going places and that may get lost on some people, given that they are a way down in the sun belt, where hockey coverage does get a little lost.  Just paying attention to this team on paper may need an extra keen eye, but I think this team could make its way into the playoffs, with one or two decent pieces.  They'll certainly be a good team to pick from at the hockey pool draft in the coming year(s).
Posted by opiatedsherpa at 12:00 PM