When considering the Detroit Red Wings' 2018 season, let's all remember that this was a franchise that had all kinds of salary cap issues, which had really handcuffed this team and was going to for quite a while.  They found some relief in a couple of places, like Arizona and Vegas, over the last 12 months, but there was just not going to be much in the way of on-ice success, when you broke down what they had on paper and put it out there on the ice.  With that being said, expectations were certainly low on this rebuilding team.

The Red Wings finished 27th overall in the NHL standings, which didn't give them bad odds at the draft lottery and we'll focus more on that later, but it may have actually been a bit higher than what some of us may have expected.

It's not really all that fair to pick this team apart, since they were in shambles at the start of the year, but slowly, they are going to right the ship and get back in line with just about everyone else, when it comes to drafting and putting together a salary cap team that stays relatively competitive.  GM Ken Holland, who was rumoured to be out the door at season's end, has signed a new 2-year deal with the club, trying to clean up the mess that he had created.  He has some pieces in place, but his drafting record could be a lot better and that will have to start this summer. 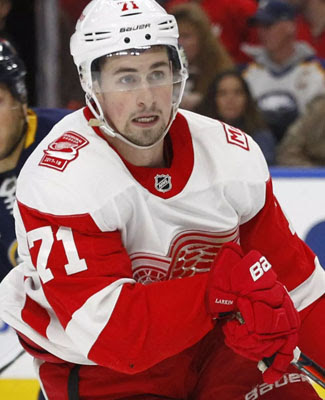 21-year old Dylan Larkin is the team's brightest star at the moment and he shone pretty well, despite the team around him.  He was the only Red Wings player to finish in the top 100 in pool scoring, ranking 74th with 16 goals and 63 points, playing in all 82 games for the club.  He certainly carried this team through much of the tougher times in the 2018 season and will be the lynch pin of this organization moving forward.

In total, the Red Wings finished the year with 10 players, including Larkin, on their roster that was pool worthy.  Henrik Zetterberg, Anthony Mantha, Gustav Nyquist, Justin Abdelkader, Frans Nielsen and Andreas Athanasiou were all worthy forwards, while Mike Green and Niklas Kronwall were good enough from the back end and Jimmy Howard was 27th among all goalies in pool points with 47 in 60 appearances.  No one had a stellar year in Detroit, but when you play as many games as these guys do in a year, they are bound to win some games and score some goals along the way.  They are a bunch of NHL pros, after all.

Things are not so rosy for the Red Wings, heading into the 2018 season, but if they can somehow solve some of their salary cap woes, they could still find themselves competing for a little while. I just don't see the other 30 NHL clubs giving the Red Wings much of a hand though, I'm sure they'd rather see them wallow in the draft lottery for another year or more. This off-season will be a struggle for the Red Wings, but if there is one guy who is up for the job, it's their GM, Ken Holland.

The pennies were pinched, some dollars were saved, Athanasiou was signed under the gun, but it was still a long year for the Red Wings, as expected.  Ken Holland is back for another spin with the club and it will be interesting to see what he's got to work with and what he could possibly do to make this team any better for the 2019 season.

You tell me!  My pick for the Red Wings' breakout player was Dylan Larkin, mostly because this was year number three for the speedy forward and he did not disappoint, as explained above.


Okay, first things are first... this won't be what the Red Wings lineup is going to look like on opening night.  I filled in a lot of gaps with signed players, just to make this 24-man roster, which includes the injured Johan Franzen, so the Wings are going to be somewhat flexible, finally, this summer.  There's a lot of work to be done and with the way that the summer is shaping up, there probably isn't enough out there to make this team shine too brightly in 2019.

So, currently, the 24-man roster above is coming in at $61.9 million, plus a buyout on the books and Franzen's LTIR relief and the remaining cap space, against last year's $75 million, is sitting at $15.4 million.

Dylan Larkin, Anthony Mantha and Andreas Athanasiou are all in need of new deals as potential restricted free agents, which won't come cheaply, Mike Green heads to unrestricted free agency and will probably test the waters.  All of a sudden, we're all beginning to wonder what the Red Wings can actually do and then wonder even further, what could they possibly do to get more flexibility?

The Detroit Red Wings have been very patient with their prospects in recent years, but their current organizational depth may prove to be a fast forward button for one or two of these kids, since the free agent market isn't very solid and trades are so hard to come by, unless a team is doing some salary dump work.  This might be a good thing or a bad thing for these kids, but we'll soon find out how it all shakes out.  The leading contenders for the bump up include 2015 1st rounder Evgeny Svechnikov and 2017 1st rounder Michael Rasmussen.

I'd have to say that the Red Wings need the best player available at the 6th overall spot and that might just be a homegrown defenseman in Quinn Hughes, who ranks fairly high on all the lists.  He's said to be a top end skater and puckhandler, who thinks the game very well.  The Red Wings haven't quite found the answer for the number one defenseman, since Nick Lidstrom and Brian Rafalski, but Hughes could be the guy to pin their hopes on.

With the limitations at the salary cap level, it doesn't appear that the Red Wings are going to make too many strides in the right direction in the coming year, barring a miracle move (or two) that increases cap flexibility, without giving up much in the future.  The RFA deals need to get done, hoping to be longer-term and less dollars, perhaps, but the purse strings are going to be tight and that might just mean preparing for another lottery pick next year, maybe something higher than 6th overall like this year.  There's a slight breeze of change in the air, but I don't think it's going to blow anyone's hair back.
Posted by opiatedsherpa at 12:00 PM