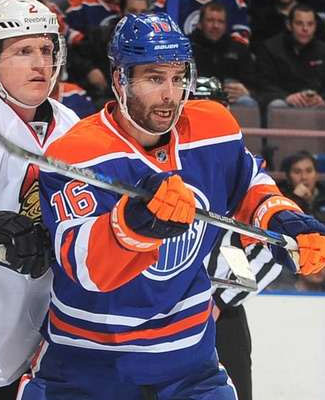 Not long after acquiring forward Jiri Hudler from the Calgary Flames, the Florida Panthers called the other area code in Alberta to acquire forward Teddy Purcell from the Edmonton Oilers, sending another draft pick of theirs to the prairies.

The Panthers are definitely making some noise in the East, as they try to concrete their position atop the Atlantic Division, adding a little bit more of a veteran flavour to a lot of their high talent kids, sacrificing some of their picks from next year's draft.

The Oilers announced that they were going to be sellers earlier in the week and now with the market setting up with more draft picks getting swapped again this year.  The Oilers and their luck with the entry draft, more so with the 1st overall pick, but I digress, will be in good shape when they fill out rheir board this year.

This is another deal, where it's a basement hockey pool team is involved, as Mike sees an Oilers player head over to another team, playoff bound.  Mike's team is 23 points out of the basement, which is definitely safer than the three teams down at the bottom, but I don't think this deal has a lot of upside for him, except for being on a better team.  It's hard to say where Purcell will fit in their lineup, but the move does help Mike's chances of not being last this year.
Posted by opiatedsherpa at 2:00 PM