Everyone Now Active in the Playoffs

On Thursday night, we saw the opening of the final three series in the NHL playoffs and it was a pretty good night for the goaltenders, if you had gone in the direction of the upset in your Eastern Conference brackets.

In Boston, the Canadiens took an early 1-0 lead on a Brian Gionta goal, only 2:44 into the 1st period and then rode Carey Price for the rest of the game.  Price ended up making 31 saves, some of a very fashionable variety and the rest in the very solid, standing tall fashion.  Gionta scored one more time with only a few minutes to go in the 3rd period and Montreal opened up a 1-0 series lead with a 2-0 win on the road.

The Bruins are the clear favourite in this series, leading the selection process over the Canadiens 87% of their possible selections to only 18%.  With 71 teams now entered in (and a few more to go on Friday), there are 213 possible selections for any team in this pool and the Bruins have 185 picks to their name this year.  By the selection process, they should have won 2-0.  That wasn't the case, as 5 teams picked up the full 4 points from Price on Thursday night. 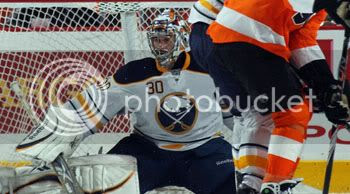 In Philadelphia, the series between the Flyers and Sabres started and it was a goaltending duo between Ryan Miller and Sergei Bobrovsky, with the ice somewhat tilted to the Buffalo end.  There was plenty of chances on Miller all night long, but even when the veteran keeper was out of his crease, he still had a pretty good beat on the puck and the Flyers were not able to put anything past.  At the other end, it didn't look like the Sabres were getting a great deal of scoring chances on Bobrovsky, but all it took was a fat rebound for the checking line of the Sabres and a mucking goal was the end result.

The game finished as a 1-0 final, Miller making 35 saves for the shutout victory, earning himself 4 points in the process.  The only goal was scored by Patrick Kaleta, who isn't in the pool this year and the only point on the goal that did count for the playoff pool belonged to Paul Gaustad, my pick as the Sabres' X-factor player in Box 19, which already looks like a good selection.

Before the game, the Flyers announced that Chris Pronger was not going to suit up for the team, as he is still dealing with a broken hand, which he had suffered over a month ago.  He was scheduled to be back for the start of the playoffs, according to the initial diagnosis, but has not been cleared to play just yet.  I don't think he would have been on the ice for the Sabres checking line, but if he was, I would have to believe he would have cleared the rebound that led to the winning goal.

The Flyers goaltending situation was one of real contention at the time of when the selection sheet was being put together and I had chose to put Brian Boucher in over top of Sergei Bobrovsky in Box 24.  I had figured that the Flyers would eventually go with the veteran, since there was some shaky faith given to the young Russian at the end of the regular season.  With the way the Flyers swapped Boucher and Michael Leighton to get to the Finals last year, I think this will still work out. 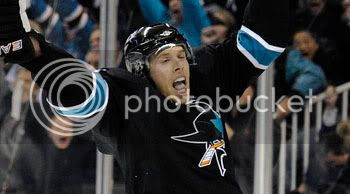 In the late game on Thursday night, the Sharks played host to the Kings to open the all-California match-up in the first round.  According to the replay on NHL.com, it looked like quite the affair with a fight, four regulation goals and one period of overtime before a big goal from Little Joe.

The Sharks took Game One with a 3-2 result in the extra frame, the second overtime game of these playoffs and it was Joe Pavelski who ended up with the winning goal at 14:44, giving the favourites the early lead in the series.

The big point getters in San Jose were Ryane Clowe, who finished with 3 assists, Antti Niemi finished with 33 saves for the victory and the 2 points, Pavelski netted the bonus point with the winning goal for 2 points and on the other side of the ice, Justin Williams returned from a shoulder injury to pick up a goal and an assist in the loss.

If you're looking for the bonus points on Thursday night, look no further than Brian Gionta, Patrick Kaleta and Joe Pavelski for them, two of three are in the pool this year.  Gionta was taken twice in the pool, Pavelski has 38 selections, so there were some bonus points through the pool on Thursday night.  It's still Flyers Fanatic #1 who leads the pool in bonus points through two nights, capitalizing on 4 GWGs in eight games.  He currently sits in 3rd place in the standings, thanks to those big goals.

The weekend will bring the remainder of the pool teams and all the links to teams that have entered, so do keep an eye out for that, more likely on Saturday morning, as Friday night will have another Canucks game and I'll probably be pretty useless through that game.
Posted by opiatedsherpa at 7:02 AM