All the Los Angeles Kings could do was scratch and claw their way through Game Six, but the San Jose Sharks proved that they were just that extra bit too strong, especially when it was when the Sharks' big guns that posted the winning goal in the end.

Gotta give the Kings a lot of credit, they really wanted to stick around in Game Six, they went goal for goal in the game, but they could never muster up a lead, always scoring to tie the game up.  In the end, it was Joe Thornton finding a loose rebound on the blade of his stick and he shoveled one past Jonathan Quick and just like that, the Kings are knocked out of the playoffs, with a 4-3 overtime final.

Thornton was tops for the Sharks in Game Six, as he scored the winning goal and added an assist for a 3-point night, while Antti Niemi made 26 saves and earned the win for 2 points in the game.  Jarret Stoll was the top player from Los Angeles in the pool in Game Six, he finished with a pair of assists in the loss.

For the Kings, there wasn't a great deal of scoring to speak of, as the leading point-getters in the series were Jonathan Quick and Jack Johnson, who each finished with 6 points, while Ryan Smyth had 5 points and Justin Williams and Drew Doughty each had 4 points.

The Sharks were heavy favourites, as the Kings only had 16% of the possible 228 picks they could have had in the pool this year.  Ryan Smyth earned the most selections with seven in Box 5, while Wayne Simmonds had six picks in Box 7.  The pool was not on their side.

It's another first round exit for the Kings, but with some of their injury concerns going into the playoffs, there should be a sense of being fortunate that they were there and/or making it to six games against a very powerful Sharks team.

With the elimination of the Kings from the sheet, four teams remain, having the possibility of keeping all 24 players into the second round of the playoffs.  Everyone else is already SOL in that department. 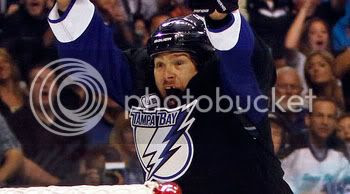 On the backs of a confident bunch, the Tampa Bay Lightning managed to get by the Pittsburgh Penguins in Game Six, 4-2, forcing a Game Seven scenario, which will be played on Wednesday night, back in Pittsburgh.

Even after an early 1st period goal by the Penguins, the Lightning were not deterred, keeping pace with their opponents through two periods and then salting it all away in the 3rd, thanks to a pair of goals before the midway point of the final frame and some stellar goalkeeping by Dwayne Roloson.

The big pool player of the night was Steve Downie of the Lightning, scoring the eventual winner and adding a couple of assists for a 4-point night.  Ryan Malone also had a goal and an assist, while Roloson made 27 saves for the win, each earning a couple of points each as well in the pool in the win.

This series has been a good one and it looks like it'll be matched up with the Bruins and Canadiens, if the Habs can force a Game Seven on Tuesday night.  No starting time has been announced yet, but the Pittsburgh/Tampa game will be featured on TSN.

Only two games went on Monday night and both game-winners did feature in the pool.  Joe Thornton of the Sharks and Steve Downie of the Lightning scored the goals.  Thornton was only picked five times in the pool, while Downie was only picked six times, so not many teams cashed in on this good fortune.

According to the standings, Flyers Fanatic #1 still leads the pool with 10 GWGs, while Jersey 20 still follows close behind with nine.  Looks like another team joined the party in the pack tied for 3rd on the list, as we now have nine teams with eight winners to their name.

With all of our graphics in order, Tuesday night will start with the Canadiens trying to save their season with a win at home versus the Bruins, as Montreal now finds themselves behind the 8-ball after losing on Saturday night and falling down 3-2 in the series.  A win at home means that they can force a Game Seven, which would have to be played in Boston, but all they want is the chance to make it through, but it'll now take the long way around.

For the Bruins, the motto should be, "just get pucks on net, because all the pressure is on Carey Price tongiht."  Price is on one wicked playoff losing streak at the Bell Centre and the Bruins will have to get down in front of the net, go looking for some rebounds and keep the opposing goalie busy all night.  Of course, Tim Thomas will have to come up pretty big, but if the offense is there, the Bruins should be in pretty good shape by the end of the night.

For the Canadiens, they really have to move that puck all night.  Whether it is using their speed when carrying the puck or their crisp passing to get the puck out of their own zone and around the perimeter on the power play, the key for Montreal is speed.  This is what won them their two games thus far and as much as the Bruins try to stifle them through the neutral zone, the Canadiens do seem to find a way.  Of course, solving Thomas will also be key, but if the team speed can generate some odd-man rushes, they could make it out of Montreal alive and fly into Boston.

The first Game Seven of these playoffs will drop the puck only a half hour after the Bruins and Canadiens get going and we should be in for a great game in Philadelphia, as the Sabres are going to try and knock off the Flyers, making for a pretty solid upset in the East.

How'd the Sabres get here?  Good team speed, extra work ethic in the offensive zone and of course, Ryan Miller.  The Sabres are not filled with stars in 2011 and now anyone who may be considered a star forward in Buffalo is injured, so it will be the blue collar kids that get the job done tonight in Philadelphia.  They've worked hard on getting pucks on net, where there has been some suspect goaltending and made their way to capitalize on some rebounds.  The game plan doesn't change for the Sabres, maybe only the faces change.  Team leader in points: Ryan Miller, 11 points.  Team leader in picks: Steve Montador, 7.

How'd the Flyers get here?  I'm thinking that it may be more of what they were unable to do that got them in this position, rather than earning their way to this predicament.  The Flyers goaltending has not been good, without Chris Pronger, their defense has not been able to make up for that and their offensive zone play has been very inconsistent as well, although still somewhat timely.  The Flyers have used all three goaltenders that they have up with the team thus far, which suggests neither of them are getting the job done, Pronger's absence has limited the confidence from the blueline, even in Game Six, when he only played the power play and the offense should have been a bit more dominating from game-to-game, but they have managed to keep some games close, if not getting away by the skin of their teeth.  Team leader in points: Claude Giroux, 7 points.  Team leader in picks: Daniel Briere, 37.

Injuries to the Sabres versus a weak back end of the Flyers... I don't know who to pick, personally.  I have Flyers on my hockey pool team, but an upset wouldn't be too bad either.

In the late game tonight, it's the epic battle between the fallen favourite and the underdog with all the momentum.  A game where the inner-demons are the main focus and succumbing or overcoming will be the main story line when the final horn sounds, as the Blackhawks try to do the improbable, coming back from a 3-0 series deficit, to knock off the Canucks for a third straight playoff year.

How'd the Blackhawks get here?  A revitalized Duncan Keith, speed through the neutral zone and playoff history on their side.  I think it is safe to say that if it wasn't for Keith taking exception to his blueline mate, Brent Seabrook, getting creamed by Raffi Torres in Game Three, this series might already be over.  When Keith played Game Four, he was a man on a mission and began a massive surge, which has now gone three games.  The Blackhawks have been able to skate their way through the Canucks in the neutral zone for all of their wins, creating chances off the rush and getting some awkward shots on net that have been difficult for the Canucks to stop.  Finally, the playoff demons that the Canucks have yet to conquer are on Chicago's side going into tonight, as they have been mocking the Canucks for the last three games.  Team leader in points: Corey Crawford, 10 points.  Team leader in selections: Marian Hossa and Brian Campbell, 9 picks.

How'd the Canucks get here?  Well, they won their three games with excellent man-on-man coverage in all three zones, a forecheck that gave the defense some fits, but they let the Blackhawks back in it, by not playing in Games Four and Five.  When the Canucks were winning games, they were like a team possessed by the desire to win, taking all sorts of time and space away from any Blackhawks player that picked up the puck, frustrating the best players on the team for the opening three games.  The Canucks' forecheck was relentless, causing many-a-turnover in the offensive zone and opening up some space for some clear shots from the point or in the slot, which were able to beat Crawford and pick up leads.  Unfortunately, the Canucks rolled over after the Torres hit on Seabrook and allowed the Blackhawks to pick up some steam with a Game Four win, which led to a huge upset at home in Game Five.  The Canucks upped their game in Game Six, but the hockey gods did not smile upon them with a late injury to Cory Schneider and the loss of footing for Roberto Luongo on the winning goal.  Team leader in points, Daniel Sedin and Roberto Luongo, 8 points.  Team leader in selections: Daniel Sedin, 54 selections.

I'm not sure what to think of how this one will finish.  I'm not even going to say.
Posted by opiatedsherpa at 7:41 AM