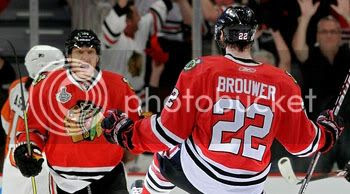 What an amazing way to kick off the Stanley Cup Finals... with a barn burner!  The Chicago Blackhawks were able to hold on to a go-ahead goal, midway through the 3rd period by Tomas Kopecky, to eventually win the game 6-5.  With 11 goals in the first game of the series, we might be in for a whale of a series, which also makes everything a little bit more interesting in the hockey pool.

Going into the game, Scott G. had himself a 5-point lead on Neil B., but after the game, it doesn't look like Neil will be Scott's biggest concern for the rest of the series.  Myles D. had himself a good night thanks to Patrick Sharp and Chris Pronger, picking up 7 points in Game One to Scott's 5 points.  Sure, the lead is now 6 points for Scott, but Myles did knock off 2 points from his original deficit, so we might actually have a race on our hands.

Remarkably, five teams picked up 7 points in the first game of the series, even the 46th ranked team, Yvette's, probably picked up a few spots in the standings.  On the flip side, three teams failed to pick up a point in Game One, even Rachael's team, which has six players active in the series.

Despite losing the game, Daniel Briere was the best player in the game, coming out with a goal and 3 assists for a 4-point night, helping a number of teams to some pretty good evenings in the pool.  The best Blackhawks player in the pool was Troy Brouwer, who finished with 3 points (goal and 2 assists), and he was picked seven times, so some teams collected on his good night.

Playoff pool points leader, Jonathan Toews, was shutout from Game One, but still keeps a 3-point lead on Daniel Briere, who did a good job to close the gap on Saturday night.

So, back to the game... with the Flyers staying with the Blackhawks for pretty well the entire game, you have to think that this series will not be a cake walk for either side, but the results are going to be just as surprising, either way.  As much as the Flyers held it close, the Blackhawks did have enough finishing ability to finally take the lead in the 3rd period and hold onto to it, closing out for the win.  To me, that signals the ability to actually close this series out quickly, in my opinion.  That isn't to say they will, but I'm saying it's possible.

Well, you know how I was talking about Brian Boucher and his major knee injuries... he actually made a return from MCL sprains in both his knees to be Michael Leighton's back-up in Game One, even making an appearance in Game One, playing 24 minutes and allowing the winning goal, taking the loss.  No one seems to expect Boucher to make the start in Game Two, but he is close by, so you just never know what may transpire down the road.
Posted by opiatedsherpa at 1:37 PM