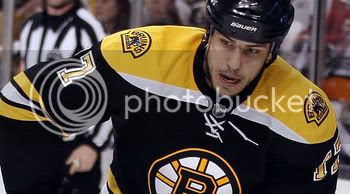 A glorious opportunity for the Boston Bruins to take full advantage of home-ice did not pass by the wayside on Monday night, as they managed to take a 2-0 series lead over the Philadelphia Flyers, thanks to 3-2 regulation time victory.  Boston managed to be the team that scored first for leads in each of the first two periods and then managed to hold out the winning goal until there was about three minutes to play in the third, leaving the Flyers little time to muster the tying goal.

At the 17:03 mark of the 3rd period, Milan Lucic became the hero in Boston with a slap shot of a rolling puck through a bit of a crowd and sealed the deal for the Bruins.  Tuukka Rask made 24 saves in the victory.

In the pool, the top point-getters only had 2 points each... Milan Lucic had the game-winner, as the only Bruins player to have 2 points, while Daniel Briere had a goal and an assist for the Flyers for the only Flyers pool player to have 2 points.  Of course, there were a number of players with 1 point in the game, but that's not really worth mentioning, is it?

The Flyers will now get a chance to use home-ice to their advantage, starting on Wednesday night.  Any loss for them at home would mean that the Bruins could close out the series at home in Game 5 on Sunday, if not sooner. The Blackhawks were in the opposite boat as the Bruins in their Game Two match-up against the Canucks.  Their home-ice advantage had already slipped away in Game One and they didn't want to go back to Vancouver down two games.  It was awfully hairy to start for the Blackhawks, going down 2-0 only five minutes into the game, but the Blackhawks were able to fight back and into the 3rd period, they managed to break through with a shorthanded goal to tie the game and the go-ahead goal with 90 seconds left.  An empty-netter sealed the deal and the series will go back to Vancouver tied at one, thanks to a 4-2 final.

Antti Niemi had to make 24 stops for the win, while his counterpart, Roberto Luongo, made 30 stops in the loss.  Kris Versteeg capitalized on a scrambled play in the 3rd period, getting open and finding a pass on his stick in the faceoff circle, blasting one high past Luongo for the winner.

In the pool, it was a good night for both Brent Seabrook and Kris Versteeg, each picking up 3 points in the victory.  Seabrook had a goal and 2 assists, while Versteeg had the winner and an assist.  No other player in the pool had a multiple-point game, it was just those two.

Hooray, a night where both game-winners stay in the pool! Lucic and Versteeg each potted their first game-winners of these playoffs, making the race for the lead a little more exciting.  Unfortunately for our leader, Russ D., he didn't increase his lead at all, he still sits at 11 winners in these playoffs, but he didn't really lose his lead either.  The main change is that he now has three teams chasing him with 10 winners to their name, as Allan S. joined the fray, thanks to the Lucic winner.  Allan also sits in 3rd place in the standings, so he is actually the highest ranking team in the four in the race for the bonus points title and he needed that extra point to stay in the conversation for the money.

Two early games on Tuesday night, both surrounded with plenty of intrigue. In the earliest game, the Penguins look to save some face after giving up a Game Two win to the Canadiens at home and break this 1-1 series tie with a win in their favour. The Canadiens on the other hand, are going to try to use their momentum to help slide themselves into a lead of their own, furthering their chances for an upset.

The players that lead the series in scoring for the pool, Mike Cammalleri and Scott Gomez of the Canadiens, each have 4 points and 0 selections.

In the later game, the Red Wings need to do what the Sharks did to them in San Jose and that's make good use of their home-ice, starting tonight. The Sharks won both their games in the tank, but head to the Joe Louis Arena with their two Joe's in tow, trying to get a stranglehold on this series. The Sharks would do well with a split in Detroit, while the Red Wings need to assert the veteran presence over the Sharks to help extend the series past four or five games.

To no surprise, Joe Pavelski leads this series in scoring with 7 points and 18 selections, while on the other side, Pavel Datsyuk has 5 points and 4 selections. I think we know who the favourite is there.
Posted by opiatedsherpa at 7:12 AM