Habs Ignite Their Game at Home 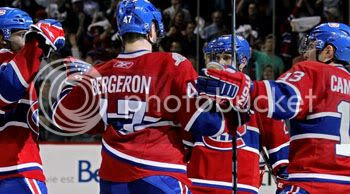 Making good use of your opportunities... that's what the Montreal Canadiens were able to do against the Philadelphia Flyers on Thursday night, as they climbed back into the series with a home victory, beating their Eastern Conference Final opponents, 5-1.  The Canadiens obviously got a lift from the home crowd and likely some home cooking to beat the Flyers at their own game and the Canadiens were able to beat a team when outshooting them in the game.

I wasn't able to catch the game, but seeing the highlights of the game, it really looked like the Canadiens had the momentum right from the start and was able to play their game and frustrate the Flyers from start to finish.  The shutout streak for Michael Leighton ended rather abruptly on a goal from a fortunate bounce and the Canadiens got some scoring production from the players they need production from.

It was a good team effort in terms of scoring, but of course, the Playoff Pool saw little improvement from the large amounts of Canadiens scoring last night.  The only two players of note for the Habs are Marc-Andre Bergeron, who had a late 3rd period power play goal and Roman Hamrlik, who had a couple of assists.

Now, just because we saw little bits of improvement in the Playoff Pool doesn't mean we didn't see important changes in the standings.  Neil B. is the only team in the top seven to have Bergeron on his team and that was a pretty important goal that he scored, as it moved Neil into a tie for 1st place with Scott G., who didn't benefit at all from the only Flyers goal that was scored.  Also doing a little bit of shifting in the standings, Leo M. and Myles D. each gained a point on 1st place as well in the game, thanks to the Chris Pronger assist on the only Flyers goal.

For those trying to keep track, it was Tom Pyatt who was eventually credited with the winning goal in Game Three, which doesn't figure at all into the bonus points count in the hockey pool.

Well, it looks like we have a series here, but I'm sure Scott G. would like a higher scoring one, just so some of his Flyers could keep him in the lead.
Posted by opiatedsherpa at 8:28 AM