Flyers Stomp on Habs in Game One 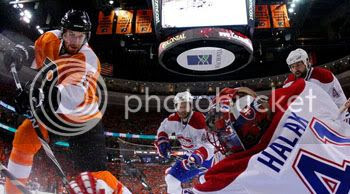 The Flyers and Habs were underway in Philadelphia and it was the home team that made a maor impression on everyone watching.  The Flyers did manage to score early, going up 1-0 only four minutes into the game, but it wasn't until the 2nd period before they were able to score often and really put their boot marks into the Canadiens.  A 3-goal 2nd period was then follwed by a 2-goal 3rd period and they also had fantastic goaltending from Michael Leighton, as the game finished up as a 6-0 final.

The Canadiens managed to outshoot the Flyers in the game, which has been a negative omen in these playoffs in the past.  The Canadiens have done better capitalizing on a pressing team's mistakes, more than creating their own opportunities, one after the other.  Jaroslav Halak was not very good as a regular backstop in Game One, allowing 4 goals on 14 shots, while Leighton had to be good for his shutout, making 28 stops in the victory.

There was a pretty good smattering of scoring in this game for the Flyers, with numerous players picking up 2 points in the game.  Braydon Coburn gets the honours of being top-billed in this game, scoring the first goal (and eventual winner) and adding an assist in the 2nd period for a 3-point night.  Scott Hartnell, James Van Riemsdyk, Matt Carle, Claude Giroux and Daniel Briere all chipped in with 2 points for the poolies on Sunday night.

The 2 points for Briere on Sunday brings his total up to 20 for these playoffs, putting him in a tie for 3rd in pool scoring, but he's now tied with Sidney Crosby, who was eliminated in round two, so he should be able to pass him by series end.
Posted by opiatedsherpa at 6:57 AM