Blackhawks Go Home With Two Wins in Their Pocket 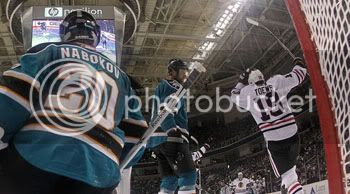 It's primarily a polar opposite from the East in this Western Conference Final, as the road team has now won the first two games of this series and now has full home-ice advantage, instead of needing their home-ice advantage to stay alive.  The Chicago Blackhawks forced a fairly heavy (and pesky) hand in Game Two in San Jose.  They not only frustrated the Sharks with a somewhat lopsided score on the board, but managed to have the Sharks superstars boil their tempers over.

The Blackhawks seem to be working a pretty solid game plan of some good old fashioned playoff hockey, being hard on the body, getting some good forechecking in and moving bodies into the front of the net, while the Sharks just seem to want to let them and get frustrated by it.  I have a hard time believing that they will make it out of Chicago alive, but I suppose there should be some shred of hope, since they are only down 2-0.

After the Philly/Montreal game, Scott G. had himself a pretty solid lead of about 7 points, which I was beginning to think was a little too solid.  I failed to take into consideration the difference in picks between Scott and Neil B., when it came to the Chicago/San Jose series.  Neil does out gun Scott pretty badly in this series and he took that 7-point lead and crushed it between his toes.  Neil had points from Jonathan Toews (3), Patrick Kane (2), Marian Hossa (1) and Dan Boyle (2), while Scott only had 1 point from Dustin Byfuglien.  So, now the lead is down to 1 point after the Game Twos of the Conference Finals and it does look like a two horse race down the stretch.

Jonathan Toews continues to lead the pool in scoring, as he's now up to 25 points in these playoffs. He's picked up 7 goals, 2 winners and 16 assists already and he's rolling at pretty good pace so far. If the Blackhawks can knock off the Sharks right away, Toews should benefit well from the remaining few games, but for Neil B., he better hope that the Flyers/Canadiens series doesn't go on too long as well, for the lead's sake.

Again, it has been a little while since I've posted the Game-Winning Goals logo, so I thought I would here today, just to bring back some fond memories and tell you about Russ D., who stormed out into the lead in the race. Russ has got himself a firm grasp of things in the bonus points race, thanks to being the only team to pick Daniel Briere, especially down the stretch of the Philadelphia/Boston series.  Russ now leads the way with 17 GWGs in the pool, which is 4 better than his nearest competitor, Chris M..  These bonus points have also lifted Russ into 5th place in the pool, only 10 points out of 1st place.

Briere leads all players in these playoffs with 4 winners, while Mike Cammalleri and Joe Pavelski each have 3 winners.  Those are your top three so far in these playoffs.  Russ is capitalizing on two of the top three, so he's firmly in business there.
Posted by opiatedsherpa at 7:00 AM