Flyers Remain In the Mix 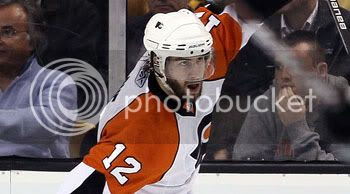 Both Eastern Conference teams behind the 8-Ball resisted the boot on Monday night, as you already know, the Canadiens forced Game Seven against the Penguins and the Flyers also pushed their series against the Bruins to a Game Six, thanks to a 4-0 win in Boston.  In a couple of the pre-game polls that I had read before the games had gotten start, it was expected that the Bruins would close out the series at home and we would have a finalist in the East by this time today.  Well, they underestimated the Bruins, didn't they?

The biggest story of the game was that the Flyers managed to shutout the Bruins with two goaltenders after Brian Boucher had to leave the game with a knee injury.  Boucher was injured after his own teammate, Ryan Parent, fell awkwardly upon him, twisting Boucher's knee and making it too uncomfortable for him to continue.  Michael Leighton, who I highlighted in the evening's preview, had to play a big part in securing the Flyers win, as well as the shutout, which was split, so no credit is handed out.  Since Boucher was on the ice for the opening goal, he gets credit for the win and the 2 points in the pool.

Only one player in the pool, besides Boucher, managed to pick up a multiple-point night and that was Simon Gagne, who scored a pair of goals in the game.  Gagne has been clutch for the Flyers since his return from the broken bone in his foot, now having 3 goals in 2 games, helping to orchestrate the comeback for the Flyers.  For those wondering, it was Ville Leino who was credited for the winner last night for the Flyers, but as a non-pool player, he steals another game-winner from the clutches of the pool.

Daniel Briere had an assist in Game Five for the Flyers, which now gives him the outright lead in points in this series between the two clubs, with 7 points.  Briere was also taken once in the pool, so that's really good news for someone in the pool, who has now collected 13 points in the pool from Briere.

So, the word on Brian Boucher is that he will likely miss the remainder of this series and a good portion of the Conference Finals (if they make it that far) because he has sprained MCLs in both his knees, his left being worse than his right, which will keep him out a few weeks. This is a report from Comcast Sportsnet through TSN, so it should be pretty close.  But that's not all... the Flyers also lost forward Claude Giroux after he was hit from behind into the boards by Steve Begin in the 2nd period.  Giroux left the game and didn't return, but by the sounds of things, it was all for precautionary measures.  The Flyers brass did comment to say that they didn't think the injury was too serious, which is still a little vague, but definitely leaves the door open for a return in Game Six.
Posted by opiatedsherpa at 7:11 AM