Similar Results on the Next Night of Action

The two sets of Conference Semi-Final series are awfully eerie in coincidences. Both of them are playing out the same way in terms of wins and it's getting awfully spooky. 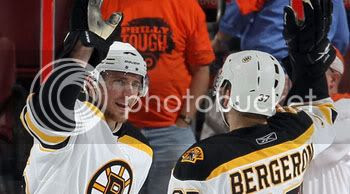 The Philadelphia Flyers had their chance to climb back into their series against the Boston Bruins on Wednesday night, but playing a minute and a half with their only lead in the series (up 1-0 in the first period) isn't going to cut it. The Bruins did give up the first goal of the game, but they came back and lit up the Flyers for a pair of their own in the opening frame and then stuck the dagger into the heart of the game with an early power play goal to start the third period and an empty-netter late to seal the deal, a 4-1 win. The Bruins now have a 3-0 series lead over the Flyers and they will go again on Friday night.

Blake Wheeler was the top man in the pool for the Bruins, scoring a goal and an assist in the victory. He's the only player in the pool to register more than one point, especially since Tuukka Rask and Miroslav Satan are not on the Sheet this year.

This series has been fairly poor in terms of scoring, which makes it even worse in the pool, because the picks are scarce, to say the least.  Five players have 4 points each to lead the series in scoring, which will hopefully wrap up on Friday night, just for the sake as it's painful for the pool to watch.

The Bruins may have gone up 2-1 at the time, but the first play out of the Bruins zone was Mike Richards hammering David Krejci, knocking Krejci out of the game. Boston was not going to be too forthcoming about the injury to Krejci, especially if it's minor and he is able to come back right away, but if it is long-term, I would imagine that the injury will be disclosed around the time of Game Four. 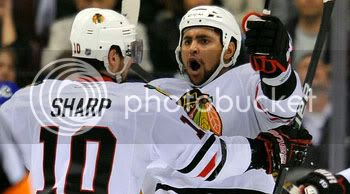 In Vancouver, the Canucks and Blackhawks took their even series into Game Three and much like the series between the Penguins and Canadiens, it was the road team that managed to win the game and break the split.  The Blackhawks were all over the Canucks' crease on Wednesday night, making life especially difficult for Roberto Luongo, who had his fair share of troubles corraling loose pucks and rebounds, to which the Blackhawks found instead and were able to put away in the cage.  The Canucks gave it a good fight in the second period, but being down one goal to start the third was not good enough, as the Blackhawks scored a pair in the middle of the period to ice the game away, 5-2, and thus take a 2-1 series lead into Friday.

The big point-getter in the game was also the biggest concern for the Canucks going into this series, as Dustin Byfuglien managed to pot a hat-trick, including the eventual winning goal for a 4-point night on Thursday.  A huge night for one of the bigger power forwards in the game, but he wasn't one of the favourite Blackhawks this season, as he was only taken six times in the pool.  Other big players in the game were Jonathan Toews, who had 3 points, while Patrick Kane, Marian Hossa, Sami Salo and Alex Edler all picked up 2 points in the game.

This series has seen a little bit more scoring, but will continue to see more scoring, since we already know it will go to at least five games.  Jonathan Toews is the series scoring leader after three games, having 5 points in this series and 14 points in the Playoff Pool already, to which he leads the series in as well.  This series would do really well to go seven games, especially for the hockey pool.

How are the Red Wings possibly going to deal with being behind the 8-Ball for the first time before the Stanley Cup Finals? The San Jose Sharks have them on the ropes on Thursday night and could find themselves eliminated before too long. The Red Wings have the benefit of playing at home for this crucial game, but even if they win on Thursday night, they'll have to win on Saturday, Monday and Wednesday to manage an amazing comeback.

The Red Wings will have to lean on their big players like Henrik Zetterberg and Pavel Datsyuk, who lead the team with 15 and 14 points, respectively, in this Playoff Pool.   There are 25 poolies that don't want to lose Tomas Holmstrom and hope that he can be a catalyst for a series comeback, but those Sharks are awfully strong.  Joe Pavelski leads the second round in scoring in the pool, he has 8 points and has been the best player in the second round, bar none.

Starting a half hour earlier than our first elimination game of the second round, the Pittsburgh Penguins have the ability to put the Montreal Canadiens behind the 8-Ball in Game Four of their series on Thursday night. The Canadiens have played well in their 'white-knuckling' series, but the Penguins have been able to breakthrough the Canadiens wall and score some key goals and important moments. Both teams know what they have to do to accomplish their goals in Game Four, but it's only wait and see for us spectators.
Posted by opiatedsherpa at 7:15 AM