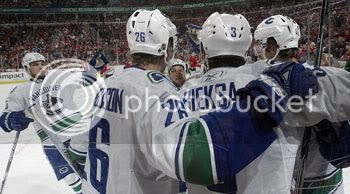 The Canucks were able to stay alive on Sunday night after going into the United Center and playing the same sort of game that earned them a Game One victory in the series, but Sunday night's game had just a touch less scoring for the road team.  The Canucks ended up beating the Blackhawks 4-1 to force a Game Six in the series, thanks to a big effort from the team's blueliners in the 1st and 2nd period, both offensively and defensively.

With the Canucks win, the series will continue on Tuesday night as a later game in Vancouver.  The Blackhawks are 2-0 in Vancouver in this series, so it will have to be one hell of a home effort by the Canucks to send this series back to Chicago for a seventh game.

The biggest game of the night came from Kevin Bieksa, who in the pre-game interview with CBC said he wanted the team to get some swagger back in their game.  Well, he led by example with a pair of goals (including the winner) and an assist for a big 4-point night.  Bieksa was taken nine times in the pool, so there were a good number of poolies happy with that unlikely result.

Other players with a multiple-point night included Roberto Luongo (win), Mikael Samuelsson (2 assists) and Henrik Sedin (2 assists).  Kyle Wellwood also had a pair of assists, but he wasn't put on the pool sheet this year, so they don't count for squat.

The win was somewhat of a costly one for the Canucks, as they did end up losing the services of Sami Salo at the end of the 1st period, after inadvertantly blocking a shot, which caught him in a seemingly awkward position.  Confirmation of the injury has not been given by the Canucks and there are plenty of rumours out there as to what the injury could be, but none of which I will jump on as gospel at the moment.  Salo did have to go to the hospital for treatment, but initial reports suggested that was precautionary.  More will be reported once it's released.  Salo is a Box 10 defenseman, taken 12 times in the pool this year.
Posted by opiatedsherpa at 9:01 AM