Sharks Up Two on the Red Wings 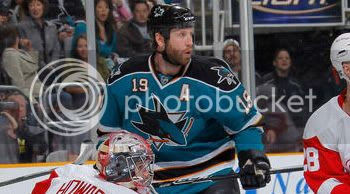 The San Jose Sharks were the favourites going into the series against the Detroit Red Wings by their position in the standings, but their background in the playoffs had made a lot of doubters out of those Sharks.  After Sunday night, I think there was a lot of eyebrows raised, as the Sharks have taken both of their home games (as they should have with home-ice advantage) and will now go to Detroit with a 2-0 series lead and a ticket to prove all the critics wrong.  By critics, I mean all those people who thought they knew better and chose them to lose right away in their hockey pools, instead of those people that knew one of these years had to be theirs.

It was a 4-3 victory in regulation for the Sharks and it was a good, high scoring game for the poolies.  For the Sharks, it was Joe Thornton, Dany Heatley and Joe Pavelski who each had 3-point nights.  Thornton scored the winning goal and added an assists, Heatley had 3 assists and Pavelski had a pair of goals and an assist.  The Sharks two big Joes have now picked up 11 points in the first two games of this series, but that's mostly Pavelski with 7 points.

Also having a good game in Game Two, Evgeni Nabokov picked up his 2 points for the win, while Pavel Datsyuk had a goal and an assist and Brian Rafalski had a pair of assists for the Red Wings.  Someone could have really had their fill in the pool in this game.

After Sunday, we now have an outright leader in the game-winner bonus points contest (which doesn't pay anything), as Russ D. collected on the Joe Thornton winner and he now has 11 GWGs in the pool and has taken the lead.  Russ has now jumped up to 8th in the standings, but we now have a tie for 2nd in this race, as both Carl D., who sits in 15th and Kristy M., who sits in 25th.
Posted by opiatedsherpa at 10:11 PM