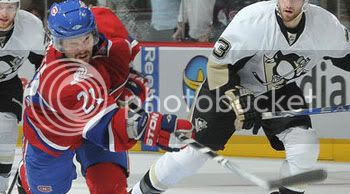 We have ourselves a series now between the Canadiens and Penguins and it's now down to a best-of-five, as the Habs managed to squeak a 3-2 home victory out on Thursday night.

The Canadiens had some momentum started early with an early tally, but the Penguins responded quickly to take a 2-1 lead into the second period.  A scoreless second made way for a third period where the Canadiens pounced early for a pair of goals and managed to hang on through a couple of power plays to earn the victory and the tied series.

For the Habs, it was Brian Gionta who tallied the winner for a 2-point effort and Jaroslav Halak made 33 saves to register the win.  Of course, no one in the pool has these players, so they all go for naught, but at least you know what you're missing, right?

With the 2 points tonight, Gionta now leads the Canadiens in pool scoring in this series with 5 points, but still trails Marc-Andre Fleury for the actual series lead, as he has 6 points in the series. 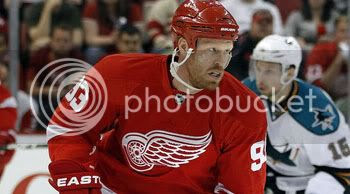 In the first elimination game of the second round, we have yet to see a boot on the page, but Johan Franzen put a boot where it didn't belong to the San Jose Sharks, as he went on an absolute tear on Wednesday night.  Before the game was even 12 minutes old, Franzen had 4 points, which was initially thought to be all goals until there was a scoring change on the 1st goal, giving it to linemate, Todd Bertuzzi.

In the end, the Red Wings came away with a 7-1 demolishing, Franzen ended up with 4 goals and 2 assists and the Red Wings are still alive to fight another day.

Did I mention that Franzen also go the game-winning goal in this game?  Well, pile that on to his already impressive total and he managed to pick up 7 points and now has the outright lead in scoring in the second round of the playoffs, now with 10 points.  Also having a good night on the scoresheet for the pool were Todd Bertuzzi (goal and 4 assists), Henrik Zetterberg (2 assists), Nicklas Lidstrom (2 assists) and Jimmy Howard (win).  There were a lot of points to be had in this game, hopefully you cashed in on it.

The series will now shift over to San Jose on Saturday, where we'll have a late game and the Sharks will try again to close out the series.

Look who's back!  It's the 8-Ball for a second consecutive morning.  The Philadelphia Flyers will try to stave off elimination on Friday night, as they play host to the Bruins and hopefully do what the Red Wings did the night before them.  The Flyers have a long way to go in this series, if they want to make a comeback. The Bruins have lost David Krejci to injury, so the road might be a little bit easier, not to mention there are rumblings that Simon Gagne could be ready to go for Friday night, which would be a tremendous boost.

The Flyers are on the verge of getting eliminated and if they do, there will be no more points for Mike Richards, who has 13 already in these playoffs, Daniel Briere and Brian Boucher, who each have 10, or Chris Pronger, who has 8 points.  That's a lot of production out the window.  The most popular player that would be eliminated from this series would be Kimmo Timonen, who has 14 picks and only 4 points.

The Canucks will try to avoid going down 3-1 to the Blackhawks on Friday night, much like the Canadiens did with the Penguins the night before. The Canucks will have to solve their traffic issues in front of Roberto Luongo, while Dustin Byfuglien will try and build on the momentum he started on Wednesday night. This is not the biggest game of the Canucks' season, because they don't really want to be going down 3-1 and to Chicago, despite winning once there already.
Posted by opiatedsherpa at 8:00 AM