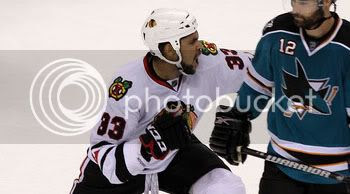 It's hard to say what the exact game plan was laid out by either team in Game One, but neither plan was seemingly ready for the goaltenders to be playing as well as they did in Game One. The Sharks jumped into a 1-0 lead midway through the 1st period, to which the Sharks really tried to build upon through the remainder of the 1st and through the 2nd period, but it was the Blackhawks that found a way and tied it almost eight minutes into the middle frame. Still, the Sharks kept on pressing and the Blackhawks pushed back a fair bit themselves. The 3rd period saw a lot of chances, but a defensive breakdown in the 3rd left Dustin Byfuglien alone in the slot and he managed to put a shot away and that goal eventually stood up to be the winner in a 2-1 game.

Antti Niemi made 44 stops for the win, while Evgeni Nabokov stopped 38 shots in the loss.  There were plenty of chances on both sides, but the goaltenders did keep this game from getting too frantic on the scoresheet.

Since the game was only a 2-1 decision, there wasn't many points to hand out.  Dustin Byfuglien had the game-winner, so that was the only 2-point performance in the game, especially since the Blackhawks goaltending for the hockey pool is sitting on the Blackhawks bench, keeping it warm.

Jonathan Toews was able to pick up a point in Game One, extending his point streak to 10 games (I believe I heard that yesterday) and lifted his pool-leading point total to 23 points in these playoffs.
Posted by opiatedsherpa at 6:40 AM