Canucks Wash the Hawks in Game One 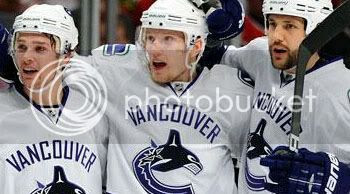 The Canucks and Blackhawks opened up their second round match-up on Saturday night and I don't think anyone was expecting the results that had actually transpired in the game, but one team is certainly more comfortable with the result than the other.  The Canucks managed to quiet the United Center crowd in Chicago with two dominant periods to start the game and that was more than enough to cruise to a 5-1 final and a 1-0 series lead.

Box 5 forward, Mason Raymond, was the star for the Canucks iin the pool on Saturday night, ending up with the winning goal of the game and an assist for a 3-point night, which has to be a big plus for the five teams that picked him up in the pool.  Raymond hasn't been offensively dominant in these playoffs until Saturday night, but his speed will be relied upon later on in this series.

Christian Ehrhoff, Ryan Kesler and Roberto Luongo were all good for a pair of points each in the pool as well, helping out some pool teams across the board.

There was a bit of a change in the second round scoring lead, as there is now a 4-way tie for the lead in the second round, as Neil B., Scott G., Chris M. and Leon G. all have 20 points after the start of all four series.  Neil has now increased his lead up to 6 points on Allan S. and Kalenab G. and is now 8 points up on Leo M., who is in 4th.

Fortunately, there were no injuries to speak of in this game, as it was a lightly-physical affair... not what we were at all expecting.
Posted by opiatedsherpa at 10:53 AM