Blackhawks Push Canucks to the Brink 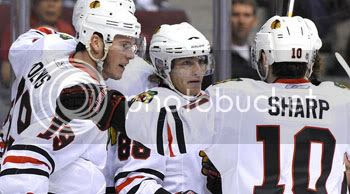 Well, in what should have been a better game to even up the series from the Canucks, the Blackhawks came into Game Four against Vancouver on Friday night and showed them the way they should have played (and more), beating up on their hosts, 7-4, to take a 3-1 series lead.

Game Five will go on Sunday night and the Canucks will be in tough in Chicago, as they try to recover some sort of face and possibly only be a game back going home for a Game Six in the week.

It was another amazing performance in the game, coming close to the best pool performance in these playoffs, as Jonathan Toews had himself a hat-trick, including the game-winner and added 2 assists for a 6-point finish for the team captain.  Toews wasn't the only one having a big night, as Patrick Sharp had a goal and 3 assists and Patrick Kane had 2 assists, as the only other pool players with multiple-point nights.  The Canucks managed to have a few players with a pair of points each in the loss, with Daniel Sedin and Henrik Sedin each had a goal and an assist each and Alex Burrows had 2 assists.

It has been mostly Chicago in this series though and Jonathan Toews has been the ringleader of that circus, leading the way with 10 points in the series, thanks in large part to his big night in Game Four. The top five scorers in this series are all Blackhawks, which shouldn't come as a surprise with the results of the last three games.

In roster news, the Canucks did sit Pavol Demitra in Game Four as a healthy scratch. Demitra has been ineffective against the Blackhawks in the first three games of the series, but the roster move didn't seem to change the overall look of the team, who seemed to roll over again. I would imagine he'll figure back into the roster on Sunday night, as the Canucks try to avoid elimination.
Posted by opiatedsherpa at 11:04 AM