Week Two came down to another tie to decide things, but with a header photo, it really takes the suspense out of everything doesn't it? Instead, what I can tell you is that Carey Price edged out Michal Neuvirth in the tie-breaking department, as Price came away with 3 wins and 1 shutout, while Neuvirth had 2 wins and 2 shutouts and wins are obviously the tie-breaking method.

Price is off to a great start to the year as the reigning hockey pool MVP, he's already taken top spot in the scoring race, edging out San Jose's Martin Jones in the same tie-breaker that has earned him this mention for the week, as they both have 12 points this year.

The 28-year old backstop beat Pittsburgh, shutout the Rangers and defeated the Red Wings this week for the honours above and he has now only allowed six goals in his five starts this year, already rocking a 5-0-0 record.  Well, if it's going to be another year of the goalie, the right one appears to be leading the way. 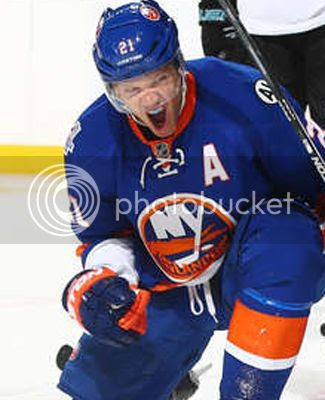 With 33 points this week, John vaulted up the standings, moving up from 19th to 3rd place, thanks to the tight start to the season and a very tight table through Week Two.  It shouldn't take much in this early part of the year to make up a lot of ground.

Along with the Player of the Week, Carey Price, John can thank Kyle Okposo of the Islanders for a 6-point week and Nail Yakupov of the Oilers for a 4-point week, helping to lead the way for his side to the top of the weekly pile.

Remarkably, John's team has not had as many skater games as most teams have had already this year, thanks to one player in the minors and a non-favourable schedule to start the year, his side has had to come up with some good scoring numbers despite those facts.  His goaltending has also helped his cause, no question about that.  Still, with two Player of the Week mentions and a Mover & Shaker now, he's still only 3rd place in the standings, 5 points out of 1st place.  It's a good shape to be in early on and if that all goes to pot here in the next few weeks, he's also sitting in 3rd place in the PIM pool as well.

It was a two-horse race in the Basement Dweller competition in Week Two, as Benson and Mike finished the week with only 15 points to their team's name.  Thanks to the magic of tie-breakers, in this case, goals scored in the week, Benson walloped Mike, 7-2 in that category, leaving Mike in the dark with the soiled mattress and rotting drywall.

Mike's team has not been responding well to the early parts or luck and strategy, as his team was banking on a couple injured player gambles and now he's suffered a power outage from Sidney Crosby (0 points through two weeks), a 3-game suspension for Tyson Barrie and a couple healthy scratches for Mark Streit in Philadelphia.

On the plus side, Mike isn't quite 27th yet... he's 26th in the standings.  Once Crosby gets on his horse and all of his injuries come back around, he might see some results here soon.  His team is still in the goalie survivor pool, with Mike Hutchinson getting every other game for the Jets, he needs his other goalie to get healthy to join the rookie pool or he'll need to goon it up at the Waiver Draft at any shot at the PIM money, as his team is already 38 PIM behind.

This week, I'm hoping to have a handle on all the prizes for the season, but what is safe to assume is that the payout will be for at least the top three, I am hoping to have some prizes similar to last year's and it should make for a fun run to the end of the season.

In Week Two, we do have a new leader, as Dale B. climbed to the top of the heap, passing Neil via the tie-breakers early on here.  Both teams have a semi-comfortable 5-point lead on 3rd place, which is also being shared by John S. (as mentioned earlier) and Dale C., only separated by a couple of goals.

The chips are falling and the cookies are crumbling, we're now just reading the results!

Rumour has it that Connor McDavid is pretty good.  He had a 5-point week for the Oilers, while Artemi Panarin had a 3-point week for the Blackhawks, as Ryan continues to work his money back.  Ryan's team now has 13 points in the rookie pool, compared to Troy's 6 points and Ryan only has two of his four rookies active at the moment.  This race shouldn't be close and there might just be an onus on the PIM pool at the Waiver Draft, if this gets too far out of hand.

We had a couple of eliminations from the goalie survivor pool in Week Two, as Derek & Dan and Tony were ousted, thanks to some poor results in the week.  This leaves us with 15 teams still in the pool, having already seen 12 teams collapse under the ginormous weight of having one winning goalie per week.

It's a real shame for Dale C., who had 4 wins in Week Two, but had none in Week One, kind of like Neil and John R., who each had 3 wins this past week, but couldn't get themselves on the board to start the pool.

I think Eric has a pretty good shot at going wire-to-wire in this competition, as his team is displaying high levels of thuggery already this season.  His team posted a weekly-high of 32 PIM, increasing his lead to 16 PIM over the favourite going into the year, Wes, who only saw 24 PIM in the week.  Of course, that can all change, when hope becomes lost and Week Nine rolls around.

Have you started thinking about the Week Nine Waiver Draft already? Thinking you can take on Eric and his originally drafted goon squad? Well, have a look at the available players, sorted by penalty minutes, just so you can decide how you want to go about your Waiver Draft picks.  For the first time ever, Derek Dorsett might be taken in the hockey pool and it isn't for his scoring prowess.

It was a fairly comparable week between Week One and Week Two, as the pool was able to pull an average of 12.5 points out of 48 NHL games on the schedule, down from 13.3 points per game, but still not too bad.  Injuries are setting in, players are still down in the minors for right now, but it's all coming along.

It was very steady, in terms of skater games and minutes played from our players in the week, the averages only taking minor hits with the injuries and such.  With as many players as there were taken in the draft, it will be neat to see how those numbers are affected through the year.

Oh yeah... penalty minutes per week!  Week One saw 9.6 PIM per NHL game from our pool, where Week Two saw 9.1 PIM per week.  Let's get those goons going!

The Vancouver Canucks have gone back to having Yannick Weber in the press box as a healthy scratch, as he was up there again for Sunday night's game against the Edmonton Oilers. Weber has only drawin into a couple games this season and has found himself below rookie Ben Hutton on the depth chart in this early part of the season. This isn't very good news for John P., who picked him up int he draft this year.