Boy, it's a good thing I got off to that head start, because Monday fell flat on its face, when it came to the momentum we had gained over the weekend.  Thankfully, however, we did manage to finish the 1st round of picks and drops and I would have to think that the 2nd round should have a bunch more passes than picks. 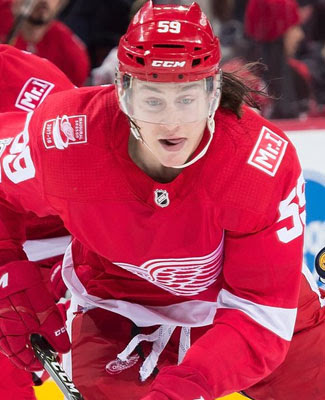 On Monday, we had four picks and one pass to close out the 1st round, beginning with Kristy & Don getting rid of one of their injured forwards in Sven Andrighetto of the Avalanche and picking up Tyler Bertuzzi of the Red Wings, trying to squeeze out every last forward point possible.  It's a homer pick, but the kid has been playing quite a bit, so it could possibly pan out in the right direction.

Wilton had one player on his roster that was done for the rest of the year and needed some droppage from his roster, Sabres defenseman Zach Bogosian, done after hip surgery in the last week and he really couldn't get himself settled this season.  In his stead, it will be Colorado Avalanche rookie defenseman Samuel Girard, who has been good this year, fitting in well after being sent in the other direction in the Matt Duchene deal from Ottawa.

An underwhelming Jack Johnson has been the subject of trade rumours out of Columbus, as he wants to be in a position where he can play more minutes, but Benson isn't going to wait around to see where he lands, if the Jackets were able to make a move for him.  Benson also made a homer pick out of Detroit, since he suggested that he didn't recognize the names of any of the other defensemen on the available players list, taking Niklas Kronwall to fill the gap.

The other Greenley brother on the list, both ridiculously too high on the standings, if you ask me, couldn't quite make up his mind all day.  Should he take a goalie?  What about a different goalie?  No, instead he opted to swap defensemen, dropping a Columbus defenseman as well, David Savard, and taking Chicago defender Jordan Oesterle, a member of the Blackhawks blueline rotation.

Finally, Dale B., the reigning champ, is going into the final segment of the season with a bucket full of confidence.  He's opted to keep the status quo through round one and likely through round two, if his luck continues.

Steve is now up to start the 2nd round of the Waiver Draft and we'll see how quickly we can plow through this.
Posted by opiatedsherpa at 8:33 AM