Keeping with tradition, the Newsletter is being published on Monday morning, even though last week finished off on Thursday night. The Waiver Draft unofficially got started on Friday morning and we've done a couple reviews of what we've seen so far, the All-Star festivities have come and gone and we've reviewed that and awarded the money there as well, but we still have some other weekly honours to hand out this morning and those will be reflected on the standings, as of today.

The hockey pool didn't need a full week's worth of action to get to the usual 8 points for our Player of the Week nod, as Robin Lehner of the Sabres only started two games this past week, one in Edmonton and the other in Vancouver, earning shutouts in both games and getting the job done efficiently.

The Sabres had three games this week, but seeing as two of those were back-to-backs, Lehner got the back half of the Alberta set, making 33 saves against the Oilers and then on the final night before the break, he made another 30 saves against the Canucks, which is pretty good after being pulled at the end of Week Sixteen, after allowing 4 goals on 19 shots against Dallas.  His shutout streak will start Week Eighteen at 119:26 and he'll likely get the nod for their first game, Tuesday night against New Jersey.

This good week now brings up his totals to 11 wins and 3 shutouts for 28 points in 37 appearances this season with the Sabres.  The Sabres got off to a rough start at the beginning of the season, but it looks like they are finding their form of late and Lehner is a big part of that.  His point total now has him ranked 176th in the overall standings, 33rd among all goalies.

Of course, the goalie rush at the start of the season, combined with the idea that the Sabres would have been playing closer to this level all season long, made for good reason to take Lehner in the 2nd round and that was what Kristy & Don had done.  Lehner was taken with the 36th overall pick, which looks like a bit of a bust, but it's coming back around, for sure.

On a side note, this was Lehner's first Player of the Week nod of his hockey pool career and this is the first Buffalo Sabres player to get the nod since the 2013 season, when Thomas Vanek did it twice in three weeks, Week One and Week Three.

It was a pretty good race for the Mover & Shaker this past week, with eight teams finishing with 20 points or more with only four nights worth of action.  Heading into Thursday's action, it was looking like Wes was going to take the title, having a sizable lead heading into the day, but his team seemed to have sputtered and Tony's team shot past and finished with 25 points, 1 point clear of his competition for his first Mover & Shaker of the season and only his second nod all-time on the website.  His first coming in Week Twenty-Three of the 2016 season. 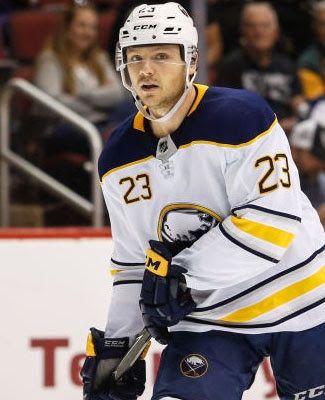 Tony's team has really been on the move in the second segment of the season, where he finished Week Ten in 17th place, his team has moved and shaken its way up into the top 10, finishing in 8th place in Week Seventeen, thanks to this big week.  His team is now 2 points out of 5th spot, but still has some work to do for the money, still 29 points out.

Sam Reinhart of the Sabres led the way on Tony's team, finishing with 4 points, while Logan Couture of the Sharks, Loui Eriksson of the Canucks and P.K. Subban of the Predators were all 3-point players in the week.  Only two active players failed to produce points on his team, which is a pretty impressive number, given the limited schedule.

In this second segment, which still has one more week of competition left, Tony's team currently ranks 4th in points (199), only 6 points out of the segment lead, his forwards are tied for 10th (112), his defense is tops at 54 points, while his goaltending is tied for 7th (33), showing that the blueline can be quite the backbone at times.  It's unfortunate that his team couldn't kick it into gear until the second-third of the season, but if he also has a strong stretch run, there could be some money talk.

As for the remaining mini-games, Tony's team is on the positive side of the ledger on the plus/minus game, currently sporting an overall rating of +12, but that is 66 points back of Steve's leading team at the break.  Speaking of the break, Tony's team will be represented by Nathan MacKinnon of the Avalanche and P.K. Subban of the Predators, both on the Central Division team, so his loyalties are not split this weekend.  Those are two pretty good players to have in this game.

Well, if Stacey C. was hoping to get a really good pick in this week's Waiver Draft, then his team went the right way to help him out!  Granted, if he wanted his team to finish respectably, well... he got a much better pick in the Waiver Draft!

6 points is the season-low for the Basement Dweller this year and the shortened schedule does have a lot to do with that, for sure.  Injuries to Semyon Varlamov of the Avalanche and Ryan Nugent-Hopkins of the Oilers also played a big part of that, while a statistic correction to Reilly Smith of the Golden Knights only compounded the problem this week.

Pavel Buchnevich of the Rangers, Leon Draisaitl of the Oilers and Brian Elliott of the Flyers all finished with 2 points a piece, while Lars Eller of the Capitals made up for the correction noted above, which rounded out the quiet week for Stacey's team.

Stacey's team dropped from 20th to 23rd, improving his pick by three and as we've seen in the recap of the early days of the Waiver Draft, he ended up picking the best player available in the draft, Boston's Danton Heinen, which should help him greatly.

There was no change in the top three this week, but the race for 1st place did get a little tighter.  Dale B., the reigning champ, still leads at 440 points, but his lead is now down to 8 points, as Stuart is at 432 and Benson is at 431, well within striking distance, at any given time.

The gap down to 4th place, however, has increased, as Wilton's team is floating there on its own at 415 points, 11 points clear of the two duos, Kristy & Don and Brenda & Seward.  After those two teams, it really is clustered and these teams will need a huge third segment to tear away and join the money teams and also hope that the money teams all suffer from the plague, simultaneously.

Well, Steve's team does seem to have its off weeks, as Week Seventeen wasn't great for his side, finishing with a -8 rating, his first negative week since Week Ten, which was only -1.  His team still carries a monster lead of 30 points over Cam's team, but that isn't impossible to overcome, since anything can happen in this department.  Steve did try to shore up his chances already and having the 1st overall selection in the Waiver Draft will certainly do that for some teams.  He took the best plus/minus guy available, Boston's Zdeno Chara, who ironically enough, belonged to Cam in the first segment.

The mini-games were included to help keep the season interesting for all teams, especially those who aren't in the money race at the top of the overall standings.  Steve is loving these games, since he's now got $60 in the bank from the All-Star tournament scoring, something you can read more about below.  Steve's team was the best of the bunch, finishing with 7 points out of the three games played and with his team defending well in the plus/minus game, he's coming out like a bandit this year.

It's been a little while since we had an update on the goon pool, which isn't for money (I feel like I should remind us all of that every time), but not a great deal has changed since the last update.  Even though Wes dropped Radko Gudas in Week Nine, his team still continues to lead the faux pool over Brenda & Seward, now up by 18 minutes.

With the bye weeks and the All-Star breaks, we've seen four teams in the last three weeks finish a week with zero minutes in penalties, which has been pretty rare before now, but the schedule certainly allowed for that this season.

In the freshmen scoring department, Cam's team overtook Clayton's team a few weeks ago and has held a slight lead ever since.  At the end of Week Seventeen, Cam's team leads 72-68 in the faux competition, while Chris' team has been flying up the ranks in recent weeks and his team currently sits at 60 points.  This would be a pretty good race, if there was money involved, especially with a few decent rookies left to be picked in the Waiver Draft this week.

It truly was a below-average kind of week for the hockey pool, as some teams were already on vacation, by the last day or two.  Injuries and backup goalies played a pretty big part, as participation was down significantly.  In 35 NHL games this week, the pool only averaged 12.3 points per game in the pool, below the season average of 12.6, but hopefully, all of the players that didn't participate this weekend are all rejuvenated and ready to go for a big stretch run.  The crunch is on for a number of teams and now we start counting down to the trade deadline, which is a month away.

The Jaromir Jagr era in Calgary inches closer to being officially over, as the team has put the veteran forward on waivers on Sunday, with the idea that he will be reassigned to a European club in the coming days, if he isn't claimed by another NHL club, which does seem somewhat unlikely.  Health issues have been a major factor of his inability to compete this season and it had limited him to only 22 games, scoring 1 goal and 7 points.

Ryan will still have to sit with him for a week, as the Waiver Draft continues, but Jagr has already got his exit papers from the hockey pool, replaced by Ondrej Kase of the Anaheim Ducks, who will be active in one week's time.
Posted by opiatedsherpa at 6:00 AM