Heading into Sunday's action, it didn't really seem like we had much of a Player of the Week race, but the games started happening and then we went from one player with 7 points to three players and then after the late games we had four or five players with 7 points and one player standing alone with 8 points and that was Calgary's Mark Giordano.

Now, with 9 goals and 47 points in 45 games, he now ranks 32nd overall in hockey pool scoring, 2nd among all defensemen and this makes him Derek B.'s best player, so far this season.  The 35-year old defenseman was taken by Derek's team in the 6th round of the draft, 147th overall and is quickly becoming a huge bargain in the draft, already moving up 115 places from his draft position.

Already this season, we have seen three Player of the Week nods go to the Calgary Flames, which brings their overall total, since the 2007 season, up to 13 appearances, five players from the Flames each have two appearances to lead the way, including Giordano.  Miikka Kiprusoff, Jarome Iginla, Kristian Huselius and Johnny Gaudreau are the other four.

There is just no stopping Wes' team at the moment, it went wire-to-wire pretty well in Week Fifteen and gave itself back-to-back Mover & Shaker weeks, moving and shaking his way all the way into the conversation for the overall money and in a big hurry too.  His team posted 42 points in the week, beating his nearest competitor by 9 points and has shot up the standings from 9th to 4th in the matter of a couple weeks.  Incredible! 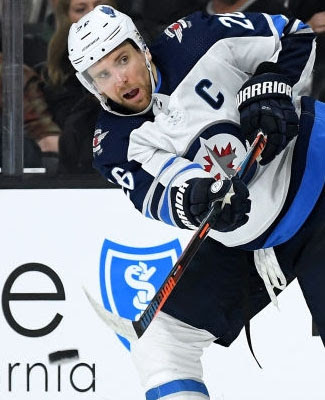 Blake Wheeler of the Jets was his top player in Week Fifteen, as he finished in the race for the Player of the Week, with 7 points, but it was another fairly well-rounded effort that earned Wes the weekly title.

Every one of his active players finished the week with at least a point, with Devan Dubnyk of the Wild finishing with 6 points, Sean Monahan of the Flames finishing with 5 points, Joonas Donskoi of the Sharks and T.J. Brodie of the each with 4 points and then it's a good mix of 3 or less through the rest of his lineup.

This is the first time since the 2017 season, where we've had a team finish with back-to-back weeks of Mover & Shaker nods, Brenda & Seward were the last team to do so in Weeks Eight and Nine of that year, but they only went on to finish 6th that season.  Wes certainly looks to improve upon that tidbit, as his team is now 4 points back of 3rd place after a couple of major gains, 11 points back of 1st place as well.

No team has ever done the trifecta of weeks, just in case anyone was wondering.

There was a little bit of a struggle down at the bottom of the weekly scoring standings, as Scott struggled to catch-up to Benson all week, as the two were mired down at the bottom for the better part of Week Fifteen, but in the end, Benson's team was just a couple of points better throughout and Scott's team has taken its third Basement Dweller nod this season, tying Eric for the infamous title.

Scott's team finished the week with 15 points, only 2 points back of Benson's team, it was just that close, but neither of those teams were very close to anyone else, which is only good for the teams looking to get away from the basement.

Jake Guentzel of the Penguins finished with 6 points for Scott's team, almost accounting for half of his team's points in the week.  Only half of Scott's active players were able to pick up points in the week, two players missing a game each because of healthy scratches, no injuries to speak of this week either.

It looks like it's a foregone conclusion that Scott will have the 1st overall pick in the Week Eighteen Waiver Draft, which is coming up fairly soon.  Now he should be hoping that his team can at least regain some kind of pace, just to see if it can escape the clutches of last place.

It's now four weeks at the top of the standings for the pool's defending champion, Stuart, who is looking to go back-to-back this season, a feat that hasn't been accomplished yet on the trophy.  His lead is now 6 points, the largest lead we've had since the end of Week Eight.

Stacey M. now sits in 2nd, passing Grant in the week, but Grant's team is only 1 point back and both of these teams are now looking down on Wes, who isn't very far away and coming up quickly, wondering how much more time they have in the money spots.  Kristy & Don were passed by Wes in the week, like they were standing still, now 12 points out of 3rd place, while Troy is now in 6th, 10 points back of the duo.  It looks like teams are now starting to really spread out.

The key injury to Clayton's rookie team has really seen his lead dwindle in Week Fifteen, as Derek B.'s team made good with 8 points in the week, compared to Clayton's 1 point, bringing the lead down to 15 points.  Ryan's team also did very well in the week with 6 points, but his team trails Derek's by 10 points, but there's still plenty of time left to go, not to mention another Waiver Draft.

It was another dull week in the shootout in Week Fifteen, only 2 goals were scored this week for the pool, collected by Brenda & Seward and Tony's teams, both still in the overall race.

Jeremy, Grant, Mike and John P. all continue to share the lead with 6 goals, but none of these teams have seen a goal since Week Eleven.

Wes' team was the most clutch in Week Fifteen, leading the pool with 4 game-winners, but his team hasn't been all that clutch all season long, as his total is only at 16 winners, tied for 16th in the mini-game.

Stuart's team continues to lead here, now up to 35 tallies in game-winning situations, which is now 11 goals better than both Benson and Clayton, 12 goals better than Tony's team as well.  Again, still lots of time and games to be won.

Ryan's team set a new season-high for penalty minutes in a week, sitting in the box for 44 minutes in total, bringing his team up to 2nd place in the non-paying mini-game.  His team made up significant ground on Stuart's team, now trailing it by only 21 minutes after gaining 24 minutes on the leader in the pool.

And with how hot his team is in the overall scoring race, it should come as no surprise that Wes' team is also quite hot in the plus/minus department as well, setting a new season-high in the week with a combined +23 rating, bringing his team up to the top of the crop with a season total of +81.  Neil's team, which had been leading up to this point, only mustered a -3 rating and saw his team drop down to +67 overall.

There were a couple of days this week, where it looked like the scoring totals were going to do okay, but it all really tailed off and we didn't see the numbers that would have really dazzled this Newsletter.  660 points was the total pull from 53 games this week, 21 points worse than the week before, which had the same amount of games.  Skater games were up, goalie minutes were way down and even penalty minutes were down.  How bland.

Week Sixteen is the last full week before the Week Eighteen Waiver Draft, since Week Seventeen is All-Star week and there is an extra day off in there this week, compared to others.  Get your points while you still can... or don't.  Maybe that will improve your selection in the next player swap.

Victor Hedman had to leave Sunday night's game against the Islanders with an upper-body injury after colliding with an official in the 2nd period. The Lightning did not have an immediate update on their star defender, but he was able to make to the bench and then the dressing room on his own power, but that was the best info we had.  It's been a tough year for the defenseman, already missing a considerable amount of time this year and we'll wait to see how much more he may miss.

Tough break for Dale C. again this year, who hasn't been very lucky with his Tampa Bay players.  His team is right in the middle of the pack this week, finishing in 13th overall and hopeful that there is still some miles left in Hedman's game this season.  He's going to need them, if he has a shot at anything this year.
Posted by opiatedsherpa at 6:25 AM