It's a very early edition of the Newsletter this week, since we're heading into the All-Star break, we might as well get the job done right away and shoot right into the Week Eighteen Waiver Draft.  There's nothing finer than a solid head start, if one can get it.  First, we'll go over the short week that was, which probably won't make for a very long Newsletter.

5 points was the best total of the week and it was a 4-way tie for top spot, so we had to get deep into the tie-breaking process to get there. T.J. Oshie of the Capitals and Joe Pavelski had 1 goal, Eric Staal had 3 goals, but as you can see, it was Alex Ovechkin of the Capitals taking top spot, finishing with 4 goals out of his 5 points.

Ovechkin posted a hat-trick and an assist against the Sharks on Tuesday and then another goal against the Maple Leafs on Wednesday night, taking the tie-breaker without much fuss in the shortened week.

This week brings his totals up to 37 goals and 57 points in 50 games this season, which is good enough for 15th overall in the hockey pool scoring ranks.  Ovechkin was selected by the fans to be the captain of the Metropolitan Division, but has since backed out to rest and he will miss the team's next game after the break, Friday, February 1st against the Flames.

Jesse is getting a good return for the 19th overall selection in the draft this year, since Ovechkin is four spots ahead of his pick selection.

There was another tie-breaker to be had in the Newsletter in this shortened week, as the Mover & Shaker was a sprint to the finish and there were a number of teams that were vying for it and only two teams came in for the photo finish, both Dale C. and Neil each topped the pool with 14 points in Week Seventeen, but the results of the snap at the line showed Neil edging out Dale by a 4-3 margin in the goal scoring department, which means Neil is our Mover & Shaker of the week. 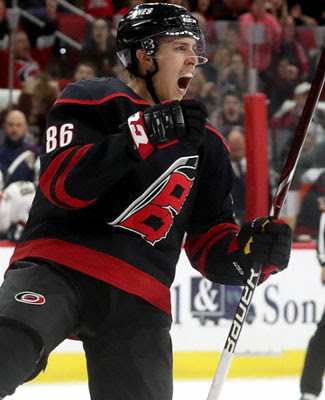 The Mover & Shaker nod didn't really hurt Neil's team when it comes to the Waiver Draft, his team didn't move up any in the standings, remaining at 19th position, but now his team is only 2 points back of 18th and is also poised to make up some ground, when he is able to drop some players in the next 11 days.

However, this week, it was led by Carolina's Teuvo Teravainen, who had 4 points in his pair of games this week, the young Finn is really coming along down there.  Also having a good week for Neil's team were Aleksander Barkov of the Panthers and Charlie Coyle of the Wild, each posting 3 points as well.

Neil's team has a couple of easy drops to make, one due to injury and the other in the minors, so his team will have some options out there, when it comes to his turn.  Being in 19th place, 65 points out of the money, it might be high time to do a little bit of research to see if there are any gains he can make in a mini-game to get his money back.  Can he somehow find 15 more game-winning goals in the available players that are left?

The light schedule was also going to wreak some havoc on the standings, because some pool teams were destined to be heavy on certain divisions or just have some horrible, horrible luck.  Chelsea's team felt that bad luck.  Her team did have a number of opportunities for points, two goalie starts, nine skater games, but only 1 point to show for it all.  Just a truly disappointing result.

Jeff Petry of the Canadiens was her only saving grace, saving her team from no points with a single assist in last night's game against the Coyotes.

On the plus side, her pick did improve by one slot for the Waiver Draft, as her team lost a spot in the standings.  Her team will now pick 4th and will possibly go fishing for some more game-winning goals as well.

Even though there wasn't a lot of action this week, there was some movement in the top three teams in Week Seventeen, as Grant's team leapfrogged over Stacey M. for 2nd place, giving up that crucial selection spot in the Waiver Draft, which I mock drafted him to pass on both picks anyways.  Grant's team now has a small 2-point buffer over Stacey's team, but more importantly, made up some ground on Stuart's team in the week, now back by 22 points.

Kristy & Don and Wes round out the top five, still within striking range of the top three, as we head into the break.  The duo are only 3 points back, while Wes is 6 points back of 3rd place.

Not a lot doing in the rookie pool this week, but Ryan's team found another 2 points from David Rittich of the Flames, picking up a win this week.  Clayton's team picked up the only other point this week, extending his lead to 11 points and he may be shopping for a little more help to defend against Ryan's team and Derek B.'s team this coming week.

The shootout was employed in this shortened week and the pool did collect a couple of goals once again, four straight weeks with 2 shootout goals.  Incredible.  Jesse's team moved up into a tie for 5th at 5 shootout goals, while Stuart's team only scored it's 2nd goal in the shootout this season this week, one stat his team isn't particularly strong in.

The pool picked up 9 game-winners out of the 15 games that were on the schedule this week, which is a pretty nice return for us.  Grant's team was best in the limited schedule, picking up a pair of winners, bringing his total up to 18 on the season, good enough for a tie for 15th.

Stuart continues to lead here by 10 winners, with 35 tallies, not picking up any this week, leading Dale C. by that large margin, while we're up to five teams that are at 24 winners, a couple new teams joining the fray there.

Clayton's team was the goon team of the week, somehow finding 20 minutes in penalties in only three days worth of action.  That brings his total up to  259 minutes this season, 12th in the pool in that regard.

Stuart's lead for goonmanship is now shrinking, as it is now down to only 14 minutes ahead of Ryan's team, which made up a little more ground in Week Seventeen.  If Ryan's team wasn't in 9th place, I'd probably say... goon it up!

The goalie survivor pool ended weeks ago, but I thought it was worth noting that the streak of wins in weeks has now stopped for Troy, as his team wasn't able to pick anything up in the All-Star shortened week, the streak finishing at 16 weeks.

The reason for the whole break is the All-Star game and we'll have plenty of coverage of the game this weekend.  The skills competition is now Friday night and the 3-on-3 tourney is on Saturday night, so grab your popcorn and get ready.  It should be a fun one once again.

There are still a couple of injury concerns, which may shift some of the rosters around a little bit more and we'll have more on that, as those news bytes develop.

The rush to the break actually brought us some decent scoring numbers in Week Seventeen, as the pool averaged 13.7 points a game in the 15 games played in the week.  That was our best number since Week Eleven, when we saw 14.55 points per game.  Here's hoping that Week Nineteen will return to a form like that, when the Waiver Draft players becoming active.
Posted by opiatedsherpa at 9:40 AM