The calendar flip didn't have any ill effects on Johnny Gaudreau's game in Week Fourteen, rather it seemed to spark his game on a little bit more, as the New Year celebrations had his game all excited.  Gaudreau became the fourth player to take a Player of the Week nod this season with a double-digit total and he had his next closest competitor done by a couple of points this week.  That's a pretty solid week.

New Year's Eve against the Sharks, he opened the week with 2 goals and 2 assists, following that up on Wednesday with another goal and 3 assists against the Red Wings.  Thursday, a goal and an assist against the Bruins and finally, only a goal against the Flyers on Saturday afternoon.  In total, it was 5 goals and 6 assists in four games to take the weekly title.

The monster week now has the diminutive forward up at 24 goals and 62 points in 43 games this season, good enough for 4th overall in hockey pool scoring, to date.  He only finds himself 7 points behind the leader and on a pretty good hot streak at the moment.

Wilton used the opening pick of the 2nd round of the draft to snag Gaudreau this year and he's turning into quite the bargain pick.  If anything, the Flames playmaker is keeping whatever slim hopes alive for Wilton's pool team and any overall money, as his team is in 11th, 45 points back of 3rd place.

The race came right down to the wire in Week Fourteen and Wes' team narrowly held on to the Mover & Shaker title, managing to stay 1 point clear of Jesse's team in the final audited tally, taking the top spot in the week with 43 points and earning his 2nd Mover & Shaker nod of the regular season. 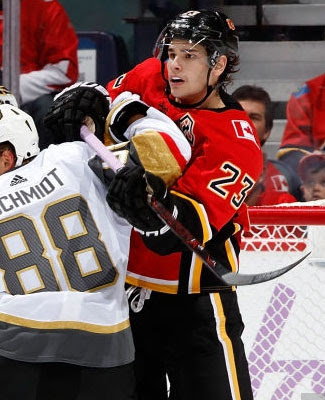 A very well-rounded effort came out of Wes' team this week, as all but one player finished with points on his active roster, which is mighty impressive and they were all led by another Calgary Flames player, Sean Monahan, who finished with a team-high 9 points in the week.

Craig Smith of the Predators also had a good week with 5 points, while Mark Stone of the Senators and Devan Dubnyk of the Wild each had 4 points, followed closely by another four players with 3 points each.

All of this good fortune was very helpful to Wes' overall standing, seeing his team jump up from 9th place to 5th place and since a number of the teams at the top of the standings didn't exactly have a great week, he made up a lot of ground.  His team now sits only 18 points back of 3rd and 20 points back of 1st place, having gained 19 points on top spot in this past week alone.

Wes' team has been running hot in this second segment of the season, now tied for 2nd since the start of Week Ten with 147 points in those five weeks and the results are starting to finally speak for themselves with the jump up to 5th.

Brian's team hit a new season-low in the overall standings this week, thanks to an underwhelming performance in Week Fourteen.  Brian's team could only muster up 15 points in the week, which isn't a terrible number, by Basement Dweller standards, but this week, in a fairly busy one, in terms of games being played, it didn't look very good.  His team dropped from 11th to 16th in the standings and now sits 23 points out of the top 10.

It's a Flames sweep of the top-billed players on the Newsletter, as Noah Hanifin was his best player this week, finishing with 5 points, which wasn't enough to inspire the rest of his team to score.  There were six players on his active roster, who finished with 0 points, four due to injury and one was at the World Juniors (winning gold).

It's definitely been a tough segment of the season for Brian's team, which now sits 22nd since the start of Week Ten, now with 107 points, 40 points behind Wes' team in the Mover & Shaker spot and that's just five weeks worth of action.

Stuart and Grant went punch for punch in Week Fourteen, both teams finishing with 24 points in the week and 392 points on the season, but Stuart's team still has a considerable lead in goals scored, so 1st place is all his for the time being.  This now makes three straight weeks with a tie up at the top of the standings and 11 weeks where the lead has been only 3 points or less.

Stacey M. claimed back-to-back weeks now in 3rd place and her team made some serious ground up on the top two, now sitting only 2 points behind and likely making those two guys fairly nervous up there.

Kristy & Don also kept the pace up, but sit 7 points back of Stacey's team in 4th, we know all about Wes' team in 5th and Troy's team, now 6th, is 20 points out of 3rd place.  We still have lots of time and another player swap to go this season, so it's not all doom and gloom yet.

Clayton's team still holds a 22-point lead, but now his prized rookie is down for a couple of weeks due to injury and that lead could shrink considerably.

The shootout has dried up again, it seems, as there were only a couple of skills competitions in the week and only a couple of goals scored in them, which has been awfully disappointing (in a way).  Ryan and Brenda & Seward were the two pool teams to collect a goal this week, Ryan's team now up to 4 goals on the season, while the duo now have 3.

The same four teams continue to share the lead at 6 markers: Jeremy, Grant, Mike and John P. and none of those four teams have seen a goal since Week Eleven.

Somehow, Stuart's team is running away with the game-winning goals pool, as his team set a new weekly-high for clutch markers with 6 GWGs this week and his team has extended its lead over Clayton's team to 10 goals, 34-24.  Jeff Skinner of the Sabres has 7 GWGs to lead the way for Stuart's team, while another three players each have 5 goals.  Those four players have more goals than most teams have in total, what crazy luck.

The goon team of the week belongs to Troy in Week Fourteen, his side was only a minute short of the weekly-high this season, finishing with 42 minutes in total.  His team went from 11th to 9th in the overall standings for the PIM pool this season.

Stuart's team continues to lead here too, just consistently heading to the box a couple handfuls at a time in each week and his team has a sizable lead here, 294-259 over John P.'s team, which has been better than his in the second segment, but the overall lead out of the first nine weeks was too great to overcome just yet.

Overall, we were just short of the season-high for points collection in Week Fourteen, as the pool managed to snag 681 points out of 53 games this week, only 8 points shy of the mark set in Week Eight.  The NHL game average did climb a bit, week over week, by a half a point per game, which is certainly positive.

Chicago Blackhawks defenseman Gustav Forsling was held out of Sunday night's contest against the Pittsburgh Penguins with an upper-body injury. He was a late scratch for the team and we have him listed currently as out day-to-day, awaiting further updates from the Blackhawks on his situation.

Forsling has been a bit of a dud pickup for Neil's team at the Waiver Draft, only posting 1 goal in nine games since being activated, dealing with other injuries as well during this second segment.  He might be worth considering for a drop, the next time around.
Posted by opiatedsherpa at 6:08 AM