The NHL trade deadline has come and gone, but the Vegas Golden Knights were no where to be seen, since they were not able to secure the final payment to the league for their expansion fees.  Nevertheless, that doesn't mean that they are not on the forefront of some team's minds, especially those who are already looking towards the off-season, namely those teams who were sellers at the deadline.

The trade deadline was not just used by teams that wanted to improve their rosters before the big playoff push, it was also used by a few teams to improve their off-season roster, ahead of the expansion draft.

I was thinking about preparing my own spreadsheets for this sort of thing and I was well on my way to doing so, but the good people at CapFriendly.com are miles ahead of the game and have been for a long while now, having an expansion draft tool on their website for a couple months already.   Their ability to stay on top of the NHL rosters is quite good and even when the deals were going down on Sunday, they were right along with them.

Using the tool, we get to go through the whole process, protecting and exposing players, all the way through to drafting the team in the end.  Of course, the whole process can be a bit more time-consuming, but what else is there to do on a Sunday?

So, first things first... protecting and exposing players.   This is definitely a very interesting part of the process, as teams will have some decisions to make.  Some of those decisions will be harder than others and some will be much, much easier.  Of course, doing the mock draft today, as the teams stand now, means that required exposure is a threat to good players, but deals will be made between now and June to ensure that these things don't bite teams in the ass.

For example, today, Justin Faulk of the Hurricanes is the only defenseman that meets the requirements for exposure, thus, has to be exposed.  All the Hurricanes have to do, however, is sign Klas Dahlbeck to an extension and bam... Faulk can be protected.

The Blackhawks, on the other hand, are buckled down to the No-Movement Clauses of eight players, which means required protection (assuming none are asked to waive their NMC) at the draft.  They have their required exposure taken care of, so it's pretty easy there.

The wealth of defense that the Minnesota Wild have is incredible and someone has to be left exposed out of a good group, while if a team chooses to protect four defensemen, like the Wild should, they will only be able to protect four forwards, three of which have NMCs, leaving more good players out for the Golden Knights.  I left Jared Spurgeon out and protected Charlie Coyle, as a reference.

Finally, the last of the big 'what if's' in this expansion process is Pittsburgh's conundrum with Marc-Andre Fleury's NMC and their exposed number one goalie, Matt Murray.  You can't make any deals with the Golden Knights for draft picks or assets in this tool, nor can you ask your player to waive his NMC, which means today, Murray is left exposed.

After wrapping up all 30 teams of protecting and exposing, the trick then, is to build your team.  If I'm the Vegas Golden Knights, starting this franchise out from scratch, like we are, I am building from the back end out.  And with the 1st pick, not that there is going to be much fanfare or likely any real order, I'm going to take Murray.  And then shortly thereafter, I'm going after the exposed Faulk and Spurgeon, since they have exceptional value and reasonable cap hits.  These are no-brainers today.

Other no-brainers on my current list, Jakob Silfverberg of the Ducks, Antoine Roussel of the Stars, Mats Zuccarello of the Rangers and Karl Alzner of the Capitals.  Once you have the no-brainers settled, then you can really get into the muddy stuff, trying to balance cap hits and positional players and making sure you get 20 contracts for the 2018 season.

Goaltending, is undoubtedly, an important position, but one you can really fill in for some good bargain prices.  Al Montoya of the Canadiens keeps coming up on my list, while Kristers Gudlevskis from the Bolts, could fetch you a decent deal as an RFA.

Defense is a great place to spend some of that cap space, because you are likely going to get some serviceable guys and going through, I picked up on guys like Jason Demers of the Panthers and Justin Braun of the Sharks, a couple of players who are getting paid and have a general solid nature to their game.

At forward, it's a much tougher game, so trying to find that edge is going to be tough for the Golden Knights.  I tried to find centres who are reliable, players that were not necessarily too old and tried to sprinkle in some of that youth that may have been hidden in the weeds among some teams.  I wanted a tough team to play up front, a team that could forecheck and possibly have just enough skill to put the biscuit in the basket.

As a whole, this is what I had come up with: 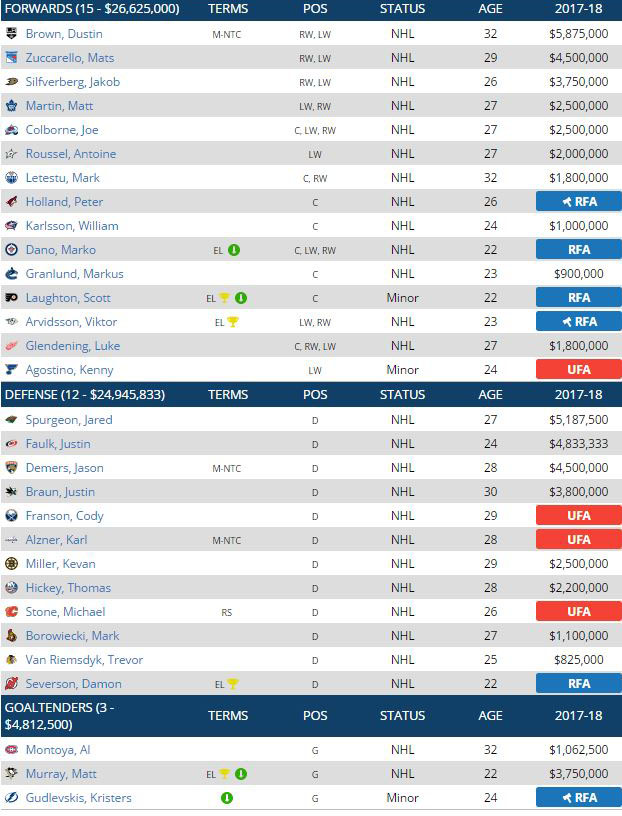 Posted by opiatedsherpa at 11:22 AM