It was a good day for passing and making people wait to pass on Thursday.  Stacey M., Clayton and Brenda all passed on Thursday, accepting that their teams are about as good as they're going to get through this process. 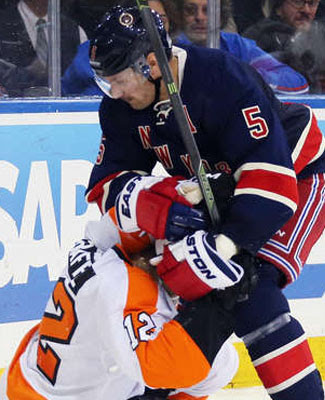 Picks 37 through 47 went on Thursday, including those three passes, and it was all led off by Dan Girardi of the Rangers, taken by Allan, making him the first of three defensemen taken on the day.  Nick Holden of the Avalanche was taken 43rd by Dale C. and Jordie Benn of the Stars was taken by Ryan 45th overall.

Only one goalie was selected on Thursday, as the current Buffalo back-up Linus Ullmark was snapped up by Stacey C. with the 38th overall pick, as he has been getting some solid minutes, just behind a slightly weaker team on paper.

Rounding out the forwards taken on Day 4 of the Waiver Draft were Torrey Mitchell of the Habs (Derek W., 39th), Rickard Rakell of the Ducks (Eric, 41st), Matt Read of the Flyers (Scott, 42nd) and Stuart took Ales Hemsky of the Stars with the 46th overall pick.

It wasn't a great day, by the number of selections made, but we started Friday with only seven picks left to do.

If you had missed the post before this one, Scott will be granted a compensatory pick for his loss of his 1st round pick, Teemu Pulkkinen to injury.  When you see that on tomorrow's post, just don't be surprised.  Requests for a 3rd round pick can be made, but will be allowed due to injury, trying to curb any funny business, like the Jeff Carter debacle we saw in this first Waiver Draft.
Posted by opiatedsherpa at 11:16 AM