The Player of the Week nod came down to an all-goalie tie-breaker this morning and as you can see, our winner was Devan Dubnyk of the Minnesota Wild, as he edged out Brian Elliott of the Blues, thanks to one more win in the week, as they both had 8 points.  Dubnyk finished the week with a 3-0-0 record with 1 shutout, while Elliott only played in two games, but they were both shutout wins.  It seems a little backwards, but the tie-breaking policy is what it is.  Wins are certainly more valuable in the overall tie-breaking scheme, so they're more important for the Player of the Week too.

Dubynk and the Wild topped the Kings on Tuesday, the Flames on Thursday and then shutout the Avalanche on Saturday, making 101 saves in those three games alone.  The Wild remain 5 points up on the Avalanche after this weekend's action, currently holding down the last wild card spot in the West, to which Dubnyk has to take quite a bit of credit for, one would have to believe.

In total, Dubnyk has made 61 appearances in the Wild net, picking up 72 points, thanks to 31 wins and 5 shutouts, and that has him ranked 18th overall in pool scoring, a solid 1st round pick, if the draft was to be redone today, according to the current numbers.

Derek W. took Dubnyk with the 17th overall pick in the draft and is getting good value for his pick.  Unfortunately, getting good value out of your 1st round pick is only a small portion of the battle, as the rest of the team let him down, with his side ranking 11th in the pool standings with only two weeks to go.

It was a pretty good race in the Mover & Shaker department, one that was seemingly destined for a tie-breaking procedure of its own, but sure enough, one team came out of the pack to take it, all by its lonesome.  Ryan's team gave itself a little bit more hope of a money finish in Week Twenty-Five, picking up 32 points and staying within 15 points of 3rd place, with only a couple weeks of action remaining. 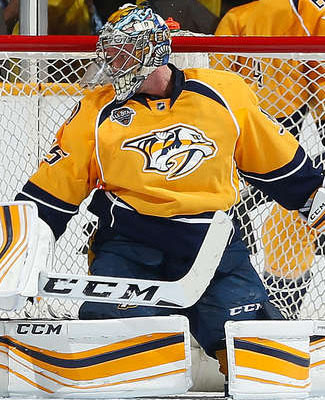 It was an all around solid effort from Ryan's team in the week, as 12 of his 14 active players on the roster, came away with at least 1 point in the week.  His team was led from the back end, as Pekka Rinne of the Predators finished the week with 6 points, while Connor McDavid of the Oilers had 5 points and three other players finished with 3 points a piece.

With McDavid back in his lineup, his team has been able to claw back some points in the standings and has seen some gains in that department.  With the 32-point week, his team gained 11 points on the current 3rd place team, so a couple more weeks of that and he'll be in business... assuming that his team can keep up the pace.

The real strength of Ryan's team this season has been at forward, where his team ranks 2nd in the pool in points per game from the forwards, scoring at a 0.72 ppg clip this year.  The unfortunate part of that is that his team ranks 25th in games played from his forwards, 77 games worse than 1st place in the category.

Ryan's team is only dealing with one injury at the moment, what appears to be a minor problem in Tampa Bay, so his team could be completely healthy before the end of this week.  In games remaining, his team ranks 6th in projected games to be played, six games better than Brian, who sits in 3rd place.

This is going to be a good stretch run.

From first to worst, the story of Mike's team this week.  Last week, Mike's team was on top of the pool, taking the Mover & Shaker by storm, but the hangover was way too much for his side, as they took the next week off, picking up only 7 points in total.  On the plus side, his team didn't drop any positions, remaining at 20th, where he finished off his Mover & Shaker week.

Sidney Crosby of the Penguins and J.T. Miller fo the Rangers each picked up 2 points to lead the way for Mike's team, while Joe Colborne of the Flames, Teddy Purcell of the Panthers and Mark Streit of the Flyers all had 1 point.

The injuries on Mike's team has been plentiful of late and only seemed to get worse in the week, which has led to this mention in the week.  Actually, injuries have been parallel to his season, as his team ranks 20th in games played from his skaters and 25th among goalies, so some bad luck all around has really kept his team from excelling this season.

Jeremy opened up his lead by a single point in the week, as his team leads Brenda & Seward's team by 7 points, heading into the last couple weeks and his team has a 15-game advantage in the projected game totals, which could be a huge difference down the stretch.  The duo are down three players for the remainder of the regular season, while Jeremy's team is down one for the rest of the year, for sure and another player is set to miss another couple games, at least.  It's far from over here, by the look of things.

The race for 3rd place gets hotter and hotter as the days go by as well.  Brian is now hanging on, holding a 6-point lead over John P. and now only a 9-point lead over Kristy & Don.  Both John and the pool's first duo have more projected games than Brian, so it will be some nervous times for our representation from down under.

Neil, who is 10 points back of 3rd place, ranks at the bottom of projected games to be played through the last couple of weeks, since his team is down three players for the rest of the year and the schedule isn't helping the rest.  He'll need a miracle out of his healthy players to force a closer race.

And then there is our Mover & Shaker, 15 points back, as Ryan won't give up hope, since his forwards are running hot again.

The schedule and injuries likely are not going to help our two combatants in the PIM pool race, as Derek & Dan now have a clear 67-minute advantage this morning over Wes, and the duo's projected games to be played is one game better going forward.  The duo is running with a handful of injuries, while Wes is having all kinds of problems as well.  Both teams will limp to the finish, but the last few weeks for Derek & Dan have been so great, they'll limp across the line, well ahead of their nearest competitor.

Injuries continue to mount in the hockey pool and we're slowly losing participation from our skaters, week over week.  At the end of Week Eighteen, the pool was averaging 20 skater games per NHL game in the week and since, there has been a steady decline, that we're now down to 18 skater games per NHL game.  This has led to a fluctuation in scoring, mostly in a downward trend, unsurprisingly.

On the plus side, the penalty numbers went back up again, moving past 11 minutes in penalties a game in the week, as things were getting a little testy in a number of contests.  It's really too bad that the pool couldn't quite capitalize on all those ruffians out there, but I digress.

It's nearly the end of the year, what else can we expect?

A lower-body injury sidelined Chicago forward Artem Anisimov on Sunday night, missing the win against the Canucks, helping them clinch their playoff spot. Anisimov has been one hell of a pick-up for the Hawks this year, acquiring him from Columbus in a cost-cutting deal, which gave the team some more depth down the middle. In 74 games, the 27-year old Russian has 19 goals and 38 points, ranking him 177th in pool scoring.

For John P., this wasn't a welcomed time for an injury, as his team continues to trail for 3rd place in the standings.  If his side is going to get back into the money, he'll need them all to be healthy, including Anisimov.

On Monday morning, the Ottawa Senators announced that they have shut down defenseman Dion Phaneuf for the remainder of the regular season, disclosing that he is dealing with an oblique injury and a sore foot.  They were also announcing that forward Clarke MacArthur will also be shut down, due to a concussion.  With only two weeks to go in the season and being 8 points out of a playoff spot, it looks like the team has resigned themselves to a longer Summer.

This makes the 3rd place race a little more interesting, as Phaneuf belongs to our 3rd place team, Brian's team,  Phaneuf has been good for 32 points this season, so that is a reasonable loss in these last couple of weeks.