What a poor week for individual efforts, as the pool topped out with four players finishing with 6 points each.  Two of them were goalies, so that eliminated a couple players before blinking and then Vladimir Tarasenko of the Blues took the title away from Vincent Trocheck of the Panthers, thanks to a goal margin of 3-1 in the end.

The top week in the pool brought Tarasenko's numbers up to 33 goals and 61 points on the year, which is good enough for 26th overall in pool scoring, a bottom end 1st round pick in a redraft right now.  That's a very good year.

For Tony, he picked up Tarasenko in the 1st round, but 11th overall, so the return hasn't been quite as good as initially hoped, but at least his 1st round pick is still considered a 1st round pick at this point in the year.

In the week, the 24-year old Russian helped Tony's team to a pretty good week, but was it good enough for the Mover & Shaker of the week?

With 12 goals scored in the week, yes, Tony's team was the better of the two teams tied for top spot in weekly scoring.  Both Tony and Kristy & Don's team finished with 34 points, but with the aid of the Player of the Week, Tony was the best team.  This is Tony's first team mention in the Newsletter this season and it's a good one. 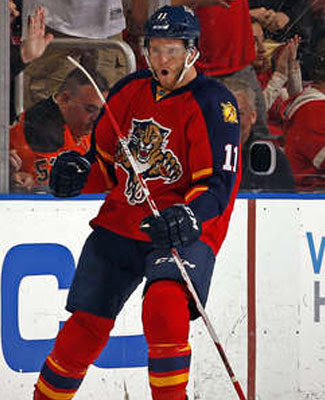 Tony's team has been red hot in the third segment of the season, ranking 2nd overall in points since the start of Week Nineteen, already picking up 147 points, almost reaching the marks his team set in the first two segments, with time to spare.

Besides Tarasenko, Tony's team was guided by Jonathan Huberdeau of the Panthers and Jason Spezza of the Stars, who each had 5 points in the week, while Ondrej Palat of the Lightning and Petr Mrazek of the Red Wings were chipping in with 4 points each as well.

Four players on his side finished with zero points, which meant that he needed a really good effort from the rest of his players and they certainly came through for him.

The third segment has been a bright spot in a seemingly dreary and unlucky year for Tony's team, which has spent the better part of the year in the bottom-third of the standings.  At the end of Week Eighteen, his team was ranked 24th and with this hot streak his team has been on, they have shot up to 16th, looking for a top half finish.  Starting Week Twenty-Four, his team is only 5 points back of 13th, which would give him that desired finish.  Once his team gets there, then he can look forward to something even better.

Tie-breaking has been the theme of the day and we'll just keep that rolling with the Basement Dweller nod this week, as three teams were vying for the spot in Week Twenty-Four.  Mike, Stacey M. and Wes all finished with 11 points on the week, so we'll look at the goals scored to see if we can decide it there first.

All three teams finished with 3 goals scored in the week, but they weren't the worst in the category, as Stacey C. only had 2 goals on the week, but that doesn't decide anything.  Next up is wins... where Wes had one win and thus removed himself from the competition, as Mike and Stacey M. each were winless.

The free fall continues for Stacey's team, which finished 17th at the end of Week Fourteen, her team's first nod and has now gone all the way down to 25th this week, only 6 points from the bottom.  With James van Riemsdyk, Kyle Turris and Jeff Petry already out for the year, not to mention another couple misses from Lars Eller, her team has lost their buckets and can't save this sinking ship.

The jockeying at the top of the standings continued last week, as Jeremy jumped over Brenda & Seward with a big week.  The duo's team is now reeling a little bit from a couple of major injuries to their side, while Jeremy's team only has one injury, but to a player with lesser significance.  Both sides have been seeing some good numbers from their healthy players, which should keep this race alive and well.

The race for 3rd place is also staying quite hot, as Brian remained in the spot, but is still looking over his shoulder, with John P. and Neil only 3 points back.  All three teams were scoring near the same pace in the week, so this race has lots of legs left for the last four weeks of the season.

Derek & Dan's team was tops in the week, finishing with 39 minutes in the PIM pool, 7 minutes better than Wes' leading team, so that finishes the week with only a 24-minute gap with four weeks to go.  If Derek & Dan can continue to close the gap by 7 minutes, they'll just sneak by at the finish line.

Wes' goons are falling off the map quickly, as his team has two major injuries, one player suspended for the better part of this coming week, another player in the minors (and suspended) and then another minor injury to contend with.  Things are not looking up for his side.

Ryan's freshmen were tops again in the week, finishing with 8 points in Week Twenty-Three, 4 points better than three teams in the standings and his team finished the week with 134 points from his rookies.  Robby Fabbri of the Blues was his best rookie, finishing with 4 points on the week, but he did finally get another win from Garret Sparks of the Maple Leafs, as he gets longer looks in the lineup.

It wasn't a great week the pool, as injuries were really starting to wear on the rosters, in a less-than-busy week.  Scoring was down slightly, as the games played went down a little bit more as well.  The penalty minutes were also below 10 minutes per game,

Let's all hope that our pool players were saving their energy for this coming week, the busiest on the schedule this season, with 52 games on the docket.

Only one note this morning, as I cleared up a bunch last night. Mikhail Grabovski of the Islanders was activated from the Injured Reserve on Monday morning, meaning he'll be good to go for tonight's game against the Panthers.  He has missed the last couple of weeks with an upper-body injury.

For Derek W., he gets a Waiver Draft pick back into his lineup, trying to get back to being a positive pick in the pool.  Grabovski is a -3, compared to Troy Brouwer, who Derek dropped to get Grabovski.